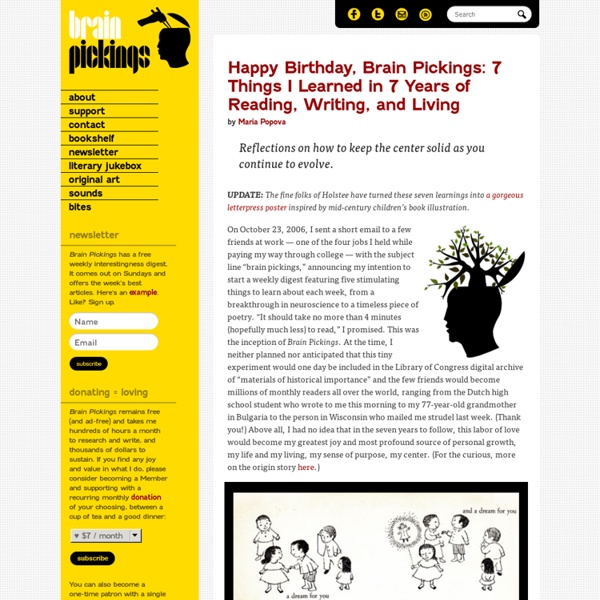 by Maria Popova Reflections on how to keep the center solid as you continue to evolve. UPDATE: The fine folks of Holstee have turned these seven learnings into a gorgeous letterpress poster inspired by mid-century children’s book illustration. On October 23, 2006, I sent a short email to a few friends at work — one of the four jobs I held while paying my way through college — with the subject line “brain pickings,” announcing my intention to start a weekly digest featuring five stimulating things to learn about each week, from a breakthrough in neuroscience to a timeless piece of poetry. Illustration by Maurice Sendak from 'I'll Be You and You Be Me' by Ruth Krauss, 1954. Illustration from 'Inside the Rainbow: Russian Children's Literature 1920-35.' Allow yourself the uncomfortable luxury of changing your mind. One of Maurice Sendak's vintage posters celebrating the joy of reading. Then, just for good measure, here are seven of my favorite pieces from the past seven years. Share on Tumblr

11 Things I Wish Every Parent Knew After 25 years practicing pediatrics, and caring for thousands of children, I’ve noticed some patterns that offer me a deeper vision of health. Here are some of those invaluable lessons: 1. Growth and development are not a race. These days we’re in such a rush to grow up. In our mechanized, post-industrialized world of speed and efficiency, we’ve forgotten that life is a process of ripening. 2. This takes time and practice. 3. There is a rhythm and pulse to each child’s life – sometimes fast and intense, sometimes slow and quiet. Growing in cycles means that we don’t get just one chance to learn something. 4. We are not in the business of raising little kings and queens. Encouragement means putting courage in your child, not doing things for him. There is spaciousness in encouragement. 5. You don’t need an expensive spiritual retreat to become enlightened. Children watch our every move when they’re little, studying our inconsistencies as they try to figure out this crazy world. 6. 7. 8.

Digital citizen A digital citizen refers to a person utilizing/using information technology (IT) in order to engage in society, politics, and government participation. K. Mossberger, et al.[1] define digital citizens as "those who use the Internet regularly and effectively".[2][3] In qualifying as a digital citizen, a person generally must have extensive skills, knowledge, and access of using the Internet through computers, mobile phones, and web-ready devices to interact with private and public organizations. People characterizing themselves as digital citizens often use IT extensively, creating blogs, using social networks, and participating in web journalism sites.[4] Although digital citizenship potentially begins when any child, teen, and/or adult signs up for an email address, posts pictures online, uses e-commerce to buy merchandise online, and/or participates in any electronic function that is B2C or B2B, the process of becoming a digital citizen goes beyond simple Internet activity. Netizen

Psychedelics Don't Harm Mental Health; They Improve It Psychedelics like psilocybin mushrooms and LSD not only don't cause mental health problems, they may actually improve mental health, say Norwegian researchers. Those are the findings by neuroscience researchers at the Norwegian University of Science and Technology in Trondheim, who reported that LSD, psilocybin and mescaline not only don't cause long-term mental health problems, but that in many cases the use of psychedelics is associated with a lower rate of mental health problems. The study pulled data from the US National Survey on Drug Use and Health, observing 130,152 randomly-selected respondents from the adult population of the US. 13.4% of that group (21,967 individuals) reported lifetime use of psychedelics. Teri S. Krebs and Pål-Ørjan Johansen, the Norwegian researchers, additionally noted that “psychedelic plants have been used for celebratory, religious or healing purposes for thousands of years” and that: Credits: Collective Evolution, Ultra Culture, Altering Perspectives

Sensory Deprivation Chamber: Would You Get Into One? First introduced by Neuro-psychiatrist John C. Lilly in 1954 A Sensory Deprivation Chamber is a light-less, soundproof enclosure, filled with salt water that is kept at skin temperature. In this chamber a person will float weightless on the water with their senses deprived (Hence the name Sensory Deprivation Chamber). They are unable to see or hear anything, all while because of the water being the same heat as your body, subjects have been noted to have said “it all just fades away” and all that’s left is the mind. In this pitch black pod, you float on the surface of a pool of water set at body temperature. Sight, sound and eventually touch are all muted so only your thoughts remain. It’s first use was in Neuro-physiology, to answer a question as to what keeps the brain going and the origin of its energy sources. From then on it has been used for various treatments such as Stress Therapy, Alternative Medicine, and Meditation. Source:

Sacred Economics | Charles Eisenstein Sacred Economics traces the history of money from ancient gift economies to modern capitalism, revealing how the money system has contributed to alienation, competition, and scarcity, destroyed community, and necessitated endless growth. Today, these trends have reached their extreme—but in the wake of their collapse, we may find great opportunity to transition to a more connected, ecological, and sustainable way of being. This book is about how the money system will have to change—and is already changing—to embody this transition. A broadly integrated synthesis of theory, policy, and practice, Sacred Economics explores avant-garde concepts of the New Economics, including negative-interest currencies, local currencies, resource-based economics, gift economies, and the restoration of the commons. The print version is available on Amazon or from the publisher directly. You can also get the eBook from the publisher here. Order Now Books

8 tips to make your life more surprising — from a “Surprisologist” A closeup of Tania Luna, with glow stick. Photo: James Duncan Davidson In today’s talk, Tania Luna shares her experience of immigrating to the United States from Ukraine as a little girl. Perfectly happy with her family’s outhouse and with chewing a single piece of Bazooka gum for a week, Luna found herself blown away by the wonders of her new country. Commit to the mindset and process of surprise. Luna believes we can all be surprisologists. Tania Luna leads a TED audience in a glowstick dance, during a talk given a year prior to the one posted today.

Susan Cain announces news to make introverts happy Susan Cain spoke about the power of introverts at TED2012. Hear her plans for making the world a little quieter for them, starting with a line of Steelcase office furniture. Photo: James Duncan Davidson Susan Cain is planning a Quiet Revolution. In her classic talk from TED2012, she spoke up for introverts, pointing out the many ways our culture encourages extroversion. “I wasn’t prepared for the intensity and voracity of response to these ideas,” Cain tells the TED Blog two years later. In her talk during All-Stars session 5 at TED2014, Cain shared how she plans to empower introverts—for the benefit of us all—by creating quiet places at work, training quiet leaders, and empowering introverts in the classroom. Quiet havens in the workplace Susan Cain has teamed up with Steelcase to create office spaces that foster the needs of introverts. “Open offices are a tremendous problem for introverts and extroverts alike. QuietTV Quiet Leadership Supporting quiet children

“Don’t Read Books!” A 12th-Century Zen Poem by Maria Popova “It’s annoying for others to have to hear you.” We live in a culture that often romanticizes books as the tender and exhilarating love-making to the “orgasm without release” of Alan Watts’s admonition against our media gluttony — an antidote to the frantic multitasking of modern media, refuge from the alleged evils of technology, an invitation for slow, reflective thinking in a fast-paced age obsessed with productivity. Given I spend the majority of my waking hours reading and writing about books, I have certainly bought into that romantic notion. Penned by Chinese poet Yang Wanli in the 12th century, the poem, translated by Jonathan Chaves, is a renunciation of books as a distraction from the core Buddhist virtue of mindful presence: Don’t read books! Zen Poems — which, I should add, features an elegant cover design by the great Barbara deWilde — is a delight in its entirety. Donating = Loving Bringing you (ad-free) Brain Pickings takes hundreds of hours each month.

166 Documentaries To Expand Your Consciousness Here is a list of over 100 documentaries you can watch for free online. They are about Science, Consciousness, ETs, you name it. It’s a smorgasbord of fascinating subjects to learn about. If you find a dead link please let us know and we will find another to replace it. 1. This list will never be complete! Featured image credits: Justin Totemical Art

Talks to watch with kids | Playlist Now playing What do science and play have in common? Neuroscientist Beau Lotto thinks all people (kids included) should participate in science and, through the process of discovery, change perceptions. Ten Choices You Will Regret in 10 Years | “If only…” These two words paired together create one of the saddest phrases in the English language. Here are ten choices that ultimately lead to this phrase of regret, and how to elude them: 1. 2. 3. 4. 5. 6. 7. 8. 9. 10. Source: Marc and Angel via Why Don’t You Try This Image: Public Domain Comments: 12 Little Known Laws of Karma (That Will Change Your Life) What is Karma? Karma is the Sanskrit word for action. It is equivalent to Newton’s law of ‘every action must have a reaction’. When we think, speak or act we initiate a force that will react accordingly. This returning force maybe modified, changed or suspended, but most people will not be able eradicate it. To stop being afraid and to start being empowered in the worlds of karma and reincarnation, here is what you need to know about karmic laws. - “As you sow, so shall you reap”. - Whatever we put out in the Universe is what comes back to us. - If what we want is Happiness, Peace, Love, Friendship… Then we should BE Happy, Peaceful, Loving and a True Friend. - Life doesn’t just HAPPEN, it requires our participation. - We are one with the Universe, both inside and out. – Whatever surrounds us gives us clues to our inner state. - BE yourself, and surround yourself with what you want to have present in your Life. - What you refuse to accept, will continue for you. Source: social-consciousness