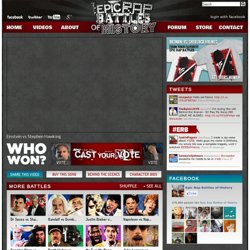 I’m a theoretical physicist from Germany. I created the the theory of general relativity that unifies the ideas of gravity. I also created the idea of “spacetime,” which combines space and time and might actually prove time travel is possible . National Archives and Records Administration. CatholicVote.org. Glossary. 09 October 2007 Glossary Absentee voting Absentee voting allows voters who cannot come to polling places a means to cast a ballot. 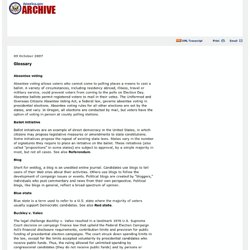 A variety of circumstances, including residency abroad, illness, travel or military service, could prevent voters from coming to the polls on Election Day. Absentee ballots permit registered voters to mail in their votes. Ballot initiative Ballot initiatives are an example of direct democracy in the United States, in which citizens may propose legislative measures or amendments to state constitutions. SimilarSites.com - Easily Find Similar Websites. Albert Einstein Site Online. Fermilab. TED: Ideas worth spreading. The Photographic Periodic Table of the Elements. Periodic Table of the Elements. Visual Elements Periodic Table.

Holloway Joe - Rey Irwin. Wolf and Owl Tribute. Wolf and the Owl. There once was a wolf that lived in a great valley known by many animals. One night on an evening hunt, the wolf heard from a distance, mysterious but beautiful songs. He had never heard them before. He was so enchanted by these strange yet wonderful songs that he went to investigate where they were coming from. By half an evenings time he came upon a beautiful owl perched in a tree. For the longest time he sat looking up a the owl, listening to her songs. One night, as the owl rested for awhile from her singing, the wolf stepped closer to the tree and said up to her, “You are so beautiful and you sing so well, I would like some day to sing with you.” All the animals began to gather at the sight, drawn in my the power of understanding, captivated by an unusual sight and enchanted by the respect being shared.

Makuya slowly turned and began to walk away with his head down in sadness. Saint Faustina Kowalska. Imgur: the simple image sharer. Simple animation to explain complex principles in Message Board Forum. Complex Stuff Explained in Simple Animations. Mechanisms are used to convert between one type of motion and another. 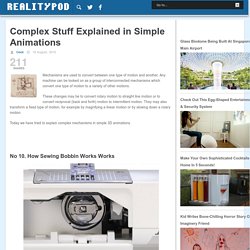 Any machine can be looked on as a group of interconnected mechanisms which convert one type of motion to a variety of other motions. These changes may be to convert rotary motion to straight line motion or to convert reciprocal (back and forth) motion to intermittent motion. They may also transform a fixed type of motion, for example by magnifying a linear motion or by slowing down a rotary motion. Today we have tried to explain complex mechanisms in simple 3D animations No 10. I have always wondered how a bobbin works when I was young. Just look at the graphic, that is really amazing. Video shows animation of how sewing machine works Video below shows step by step instruction on how to wind a bobbin Right Every Time. No 9. The most important part of a steam engine is the steam boilers, or what they are more commonly called, the steam generators. No 8. No 7. HTwins.net. Ology is all about passions.

VOA - Voice of America English News - VOA News. Think On Your Own. Wise and Famous Quotes - iPerceptive. StumbleUpon.com: Discover the Best of the Web.