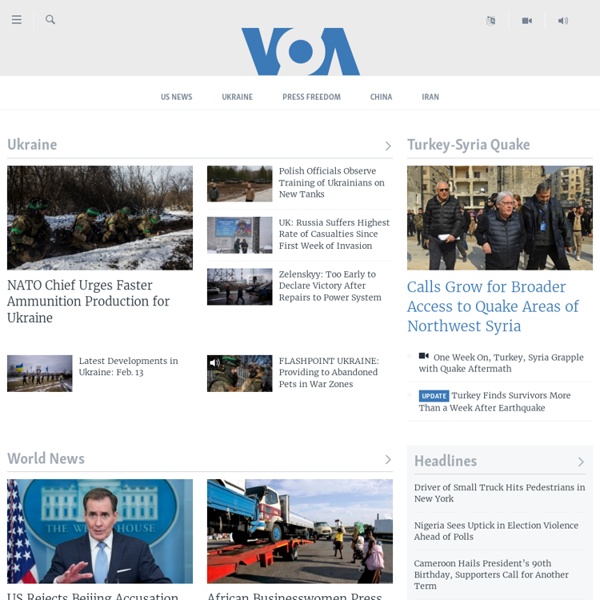 Video Carter Decries Abuse of Girls in India A 2013 State Department report on human trafficking says there are 26 million people around the world who are victims of modern day slavery, many of them young girls. The problem is a growing concern, particularly in India. VOA's Kane Farabaugh spoke recently with former U.S. President Jimmy Carter about the problem, which is addressed in his new book, "A Call to Action."

Solar-powered sea slug harnesses stolen plant genes - life - 24 November 2008 Video: Watch a sea slug eat algae to nab some of its chloroplasts, and the genes that keep them functioning It's the ultimate form of solar power: eat a plant, become photosynthetic. Now researchers have found how one animal does just that. Elysia chlorotica is a lurid green sea slug, with a gelatinous leaf-shaped body, that lives along the Atlantic seaboard of the US. ABC News 'I'm Scottish': Gutted Lambie to quit Senate in latest citizenship shock Jacqui Lambie broke down in a radio interview this morning as she confirmed she will resign from the Senate because she holds British citizenship, telling listeners she always thought she was "Australian as they bloody come". How your MP will vote if Australia says Yes to same-sex marriage We've asked every federal politician what they intend to do if same-sex marriage gets to a vote in Parliament. On the numbers we've gathered, both houses would pass a bill to change the law. Check out what your local member will do. Wong says alternative same-sex marriage bill a 'licence to discriminate' It's Kristina Keneally vs John Alexander in the by-election battle for Bennelong Labor nominates the former New South Wales premier to run in the Bennelong by-election against John Alexander, in a contest that could upset the Federal Government's fragile majority and cause major headaches for Malcolm Turnbull.

CNN.com - Transcripts Breaking News Senate Minority Leader Harry Reid says that FBI Director James Comey swayed election. Home+ U.S.WorldPoliticsMoneyOpinionHealthEntertainmentTechStyleTravelSportsVideo Seen At 11: Real Life ‘Superheroes’ Take Matters Into Their Own Hands Donning Homemade Protective Gear, Costumes They Work To Protect Gotham May 9, 2013 11:40 PM From our newsroom to your inbox weekday mornings at 9AM. Sign Up NEW YORK (CBS 2) — By day they are just like everybody else, but by night a group of real life “superheroes” patrols the streets of New York City, avenging crime by taking matters into their own hands. Members of the New York Superheroes go by names like “Snipe,” “Spyder,” “Dark Guardian,” and “Spector,” names that could have been pulled straight from the pages of a comic book, and they take their commitment to doing good very seriously.

Washington Journal OPEN TRANSCRIPTS Frequently Asked Questions Why does C-SPAN take audience calls? The call-in program - and our philosophy of focusing on the caller -- has been a fixture of the C-SPAN networks since the network's founding; it's so fundamental to us, it's incorporated into our company mission statement. Through the call-in program, C-SPAN encourages viewer interactivity by enabling viewers and listeners to talk directly to elected officials, policymakers, and journalists covering the national policy debate. C-SPAN frequently incorporates viewer call-ins into its programming schedule, both in regularly scheduled call-ins and open-phones programs that allow people to react to breaking news events.

The Sunday Times Bonmarché blames Brexit and weather for sliding profits new Bonmarché, the discount clothing retailer, blamed a string of factors, from bad weather to Brexit, for sliding annual profits and its failure to increase market share. Virtual Reference Shelf - Ask a Librarian Abbreviations Back to Top Almanacs & Fast Facts Architecture Art Jake Austin converted truck into mobile shower to offer homeless safe place to wash When people want to help the homeless in their area, they tend to think of the immediate needs: food, warm clothes and toiletries. But, when you actually stop to think about it, what good are new clothes and deodorant when you haven’t been able to wash properly in months? Think how nice it is to step into a long, hot shower after a tough day and imagine what it would be like never, or rarely, having access to private, safe washing facilities.

Can you tell the REAL LIES from the FAKE LIES? 2 real 4 false Most of us lie and get lied to every single day. We say we're fine when we're actually having a bad day. We lie to protect the feelings of others, to get out of trouble and to get what we want. Our newspapers lie, our politicians lie, our parents lie. Considering how surrounded we are by lies, we ought to be experts in telling fact from fiction: but are we? NEWS: Atlantic City Press If some state legislators get their way, the aftermath of Hurricane Sandy could bring an end to one Jersey Shore tradition — the beach badge. State Sen. Michael Doherty, R-Hunterdon, Warren, and Senate President Stephen Sweeney, D-Salem, Gloucester, Cumberland, have introduced legislation requiring any town that accepts state or federal aid for rebuilding its beaches to provide beach and restroom access for free. “A beach fee is another word for tax,” Sweeney said Monday. “I just don’t agree with it. ... You’re taking federal money (and) tax dollars to build beaches.

audio et texte en anglais sur le tabac (laura et philippe) Tobacco by Claire Powell and Dave Collett What’s in a cigarette? What’s in a puff? Tobacco smoke contains about 4,000 chemicals. 1ère ES/L : Food Preservation Methods: Canning, Freezing, and Drying (Nico&Camille) You can preserve foods inexpensively by using canning, freezing, or drying techniques. Modern-day food preservation methods, such as water-bath canning, help you can and preserve with ease. After you understand the basic procedures for a food preservation method, you'll just need to concentrate on preparing your recipe. About canning food Canning is the process of applying heat to food that’s sealed in a jar in order to destroy any microorganisms that can cause food spoilage. Proper canning techniques stop this spoilage by heating the food for a specific period of time and killing these unwanted microorganisms.