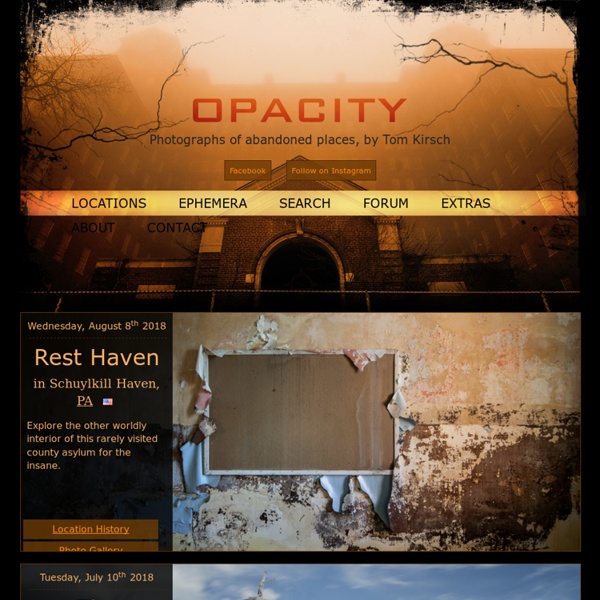 The Cool Hunter Preachers Rock, Preikestolen, Norway Blue Caves - Zakynthos Island, Greece Skaftafeli - Iceland Plitvice Lakes – Croatia Crystalline Turquoise Lake, Jiuzhaigou National Park, China Four Seasons Hotel - Bora Bora Infilspeak Dictionary Infilspeak Dictionary This is a guide to some of the technical or obscure terms related to the hobby of infiltration. We don't use code language or jargon to exclude anyone, but because it's a specialized hobby we've had to adopt or invent some specialized terms. Thanks to FiL for much of the draining vocabulary. If you think an oft-used term is missing, please let me know.

WAG: Elko Tract: Exploring the Lost City There's three of us in the Toyota, and when we turn onto the back road, we cut the lights off and drift onto the shoulder. Outside, the woods are dark and, in the moonless stillness, they seem to form a single, impenetrable wall. The dirt road ten feet from the car is almost invisible, except for the silver ribbons of the telephone and electrical wires that run down its center. For a moment we sit and stare. WebEcoist Galleries These galleries gather stunning works of elemental art, cutting-edge works of green design and technology and eye-popping high-definition resolution photographs of nature in all its many forms. Collection 1: Stunning Earth Art and Artists 42 Magnificent Works of Earth and Land Art: While earthworks are amazing, and modern artists are still setting world records for their enormous land art, many land artists and earth artworks occur on a much more small and delicate scale. From large to small, here are some of the most stellar examples. 42 Wonderful Works of Water, Snow and Ice Art: Water as a fluid is difficult to control, amazing in its complexity and a constant challenge to mankind – from floods to droughts.

10 Amazing Real-World Locations for Fantasy Worldbuilding When you’re crafting the setting of your fantasy opus, it’s tempting to layer on impossibilities like islands floating in the sky and huge arboreal elf cities. It turns out the world we live in is full of fantastical settings and bizarre natural formations aplenty. Want to ground your fantasy world in reality? Check out these 10 real-world fantastic places.

Post apocalyptic photography, Midnight-Digital, Jan 2011 : Talk Urbex Its sophos9 taking the helm in Januaries guest of the month. This months guest has a very unique style of image processing, its post apocalyptic feel has gained massive following and notoriety. The unique style is a personal favourite of mine so enough of me, lets get straight over to the main event. Let me introduce January 2011′s special guest, midnight-digital… 1) We have seen lots of your work and that featured in Beauty in Decay.

Lost Richmond – Exploring Elko Tract, Richmond’s “Lost City” « You Guys Should Know Richmond is a town of history. Everything is historic… the streets, the buildings, the canals, the houses.. its almost overload to the point where there’s so much history no one really pays attention to it on a daily basis because its just there. About a decade ago, I began hearing stories out of Richmond East-enders about Richmond’s Lost City. Although no two stories were alike, the basic gist of it was that during World War II, Richmond created a fake city a few miles east of the airport and during potential air raids, they would blackout the actual city and airport and turn the lights on at the decoy in hopes that from the air, the bombers would unknowingly bomb the decoy and Richmond would be saved. At one point, years ago, someone actually drove me out near that area, showed me the starting point of the road which was barricaded and explained to me the “dangers” of going back there.

The 6 Creepiest Places on Earth It doesn't matter whether or not you believe in ghosts, there are some places in which none of us would want to spend a night. These places have well earned their reputations as being so creepy, tragic or mysterious (or all three) that they definitely qualify as "haunted." Places like... Aokigahara is a woodland at the base of Mount Fuji in Japan that makes The Blair Witch Project forest look like Winnie the Pooh's Hundred Acre Wood. It probably has something to do with all the dead bodies scattered around. Project: HDR and Tone Mapping Above: Nikon D5100 with 18-55mm lens. This image was created by converting the file into three separate exposure values before exporting to Photomatix HDR software, for exposure fusion and tone mapping. Further processing was done using Photoshop. I've saved a selection of the best High Dynamic Range (HDR) 'tone mapping' images at my Flickr favorites. They're about the best examples, with respects to processing skill, photographic subject and composition, that I've personally found in the genre.

Afflicted: 11 Abandoned American Hospitals and Asylums “Open” for Exploration With some of the most disturbing and tragic histories of any buildings in the US, asylums and hospitals are way beyond creepy . Many of them were built in the late 1800s, when “mental illnesses” (such as masturbation, menopause, and teenage rebellion) were considered dangerous enough to lock someone in an asylum. A pain-inflicting misunderstanding of mental illness combined with a chronic mistreatment of its sufferers meant that many people were never released and spent the remainder of their lives in these horrible institutions. In addition to asylums, many sanatoriums were constructed around this time to care for the poor and very sick. Utilizing radical treatments that were incredibly painful yet ineffective, early hospitals often created more suffering than good for the inflicted.

UNESCO World Heritage List #: As for 19 Natural and Mixed Properties inscribed for geological values before 1994, criteria numbering of this property has changed. See Decision 30.COM 8D.1 Urban Decay & Urban Exploration - Bangkok Having spent the past five years in Asia my photographic subjects have been wide and varied. From abandoned buildings, market places, urban upheaval in China, to the rural landscapes of the Pearl River Delta. Now living in Thailand, I have begun to embrace a totally new style of photography: My most recent project looks at Urban Decay in Thailand, and specifically Pattaya and Bangkok. When we picture Thailand, it is rare, on any account, we conjure up images of Urban Decay. Nevertheless, the sprawling suburbs of Bangkok are riddled with such areas of interest.