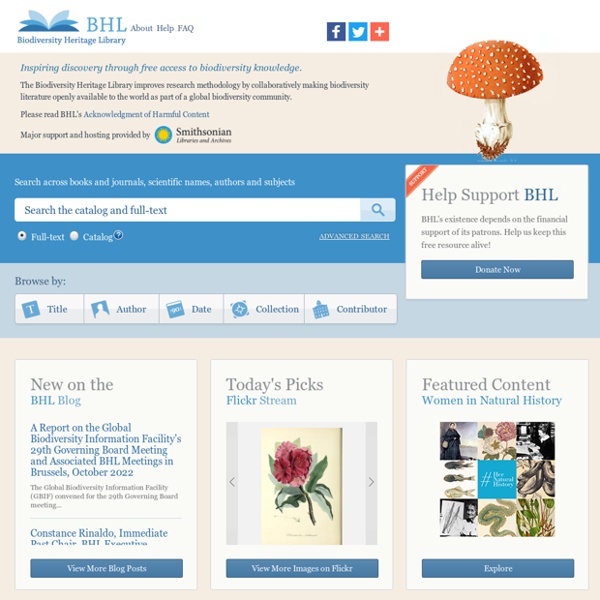 Internet History Sourcebooks Internet Ancient History Sourcebook: Full Texts See Main Page for a guide to all contents of all sections. Links to full texts of books available at this and other sites will be listed here. Ants Filmed Performing Bizarre 'Funeral Ritual' for Fallen Bumblebee This week, a video of a bizarre scene in the insect world vent viral, prompting a larger conversation about the animal kingdom and how we interpret it. The video appears to show a group of ants performing some sort of funeral ritual for a dead bumblebee – or at least that’s how many viewers interpreted it. Is this evidence of some sort of interspecies cultural rite, or merely a coincidental grouping of objects? The video does portray an admittedly odd spectacle. A dead bumblebee sits in the center of a pile of pink flower petals as ants appear to be dragging more petals to add to the pile.

Books with Full-Text Online "The 1688 Paradise Lost and Dr. Aldrich": Metropolitan Museum Journal, v. 6 (1972) Boorsch, Suzanne (1972) 20th-Century Art: A Resource for Educators Paul, Stella (1999) 82nd & Fifth The Metropolitan Museum of Art (2013) Abbot Suger and Saint-Denis Gerson, Paula Lieber, ed. (1986) "About Mäda": Metropolitan Museum Journal, v. 40 (2005) Baetjer, Katharine (2005) Hanover Historical Texts Collection : History Department : Hanover College The Hanover Historical Texts Collection makes available digital versions of historical texts for use in history and humanities courses. Search by keyword, or browse the listings below. The faculty and students of the Hanover College History Department initiated the Hanover Historical Texts Project in 1995, at a time when few primary sources were available outside of published anthologies. To make primary texts readily available for classroom use, they selected important documents, scanned print versions that were out of copyright, converted the scans into HTML format, proofread the resulting documents to correct OCR errors, edited them to provide page breaks, page numbers, and bibliographical information, and posted them online. We have since expanded the collection to include transcriptions of manuscript material from the Hanover College archives. Most of the texts in the Hanover Historical Texts Collection are in public domain.

Mild Exercise Rapidly Stimulates Hippocampus to Improve Cognitive Ability and Memory A new study uses MRI in healthy young adults to assess the immediate impact of a short bout of exercise on the brain mechanisms supporting memory processes.They found a brief intervention rapidly enhanced highly detailed memory processing and resulted in elevated activity in the hippocampus and the surrounding regions.More people should perform mild exercise like Yoga and Tai Chi to improve their memory and cognitive abilityFuture test will explore the long-term effects of regular mild exercise on age-related memory loss. People who include a little yoga or tai chi in their day may be more likely to remember where they put their keys. Researchers at the University of California, Irvine and Japan’s University of Tsukuba found that even very light workouts can increase the connectivity between parts of the brain responsible for memory formation and storage. Their results were published today in Proceedings of the National Academy of Sciences.

The Online Books Page: Book Listings Our local index includes more than 2 million works in various formats that meet these criteria. (Over 50,000 are in our "curated collection", representing entries we've personally edited. The rest are in our "extended shelves", entries that are provided by other organizations and imported in bulk.) All of the books we list should be free at least for personal, noncommercial use. You can: See also Books in progress or requested. In the listings, you can start reading a book by clicking on or selecting its title (or on the phrase that describes where it is, if you're looking at a detailed book description, or at a listing that has multiple links). Humongous fungus is older than Christianity and weighs 400 tonnes Smith, Bruhn & Anderson By Michael Marshall A huge underground fungus that is one of the largest living organisms on the planet has turned out to be both bigger and older than thought. It may have been quietly spreading through the soil of Michigan since the end of the last ice age. James B. Anderson of the University of Toronto in Canada and his colleagues discovered the enormous Armillaria gallica fungus in the late 1980s, while studying fungi that were killing red pines on a Michigan plantation.

Chemists find a recipe that may have jump-started life on Earth ATLANTA—In the molecular dance that gave birth to life on Earth, RNA appears to be a central player. But the origins of the molecule, which can store genetic information as DNA does and speed chemical reactions as proteins do, remain a mystery. Now, a team of researchers has shown for the first time that a set of simple starting materials, which were likely present on early Earth, can produce all four of RNA’s chemical building blocks. Those building blocks—cytosine, uracil, adenine, and guanine—have previously been re-created in the lab from other starting materials. In 2009, chemists led by John Sutherland at the University of Cambridge in the United Kingdom devised a set of five compounds likely present on early Earth that could give rise to cytosine and uracil, collectively known as pyrimidines.

Grimoar - Occult Texts Welcome to our library Welcome in our occult texts library. It contains 2052 unrevised texts in pdf, doc and other formats. Librarians are responsible neither for text redaction nor for their contents. It is possible that some of the texts are still under copyright. If you are not sure you act in accordance with your local law, please do not download anything. Gnostic Society Library: Sources on Gnosticism and Gnosis Almost all of the several dozen internet sites with collections of texts similar to our own obtained their material by directly or indirectly copying some files present at the Gnosis Archive. Ours was perhaps the first major collection of such texts to appear on "the web" in 1994, and thus has served as a source for others creating "their own" collections. Unfortunately transcription errors, typos, and primitive HTML formatting were present in the massive amount of material added to the Gnosis Archive in our first years; in a repeated process of "copying" they have been very widely propagated around the internet. Over nearly two decades we have made many corrections to these texts. It appears that few of the sites copying material from this collection have taken the time to read, edit and correct the texts! This is of course exactly how the manuscript tradition has propagated errors in the past centuries, though with vastly different technologies of reproduction.