HOW SUPERPOWERFUL IS USA? 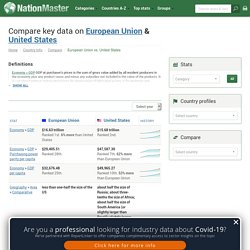 Population figures from World Bank: (1) United Nations Population Division. What made the U.S. so powerful? This question originally appeared on Quora, the best answer to any question. 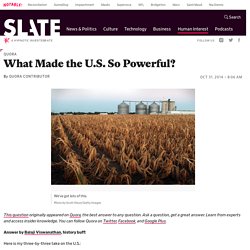 Ask a question, get a great answer. Learn from experts and access insider knowledge. You can follow Quora on Twitter, Facebook, and Google Plus. Answer by Balaji Viswanathan, history buff: Here is my three-by-three take on the U.S Geography Size: It is the fourth-largest in area and third-largest in population. Isolation: Guarded by two oceans and a frigid nation to the north, the U.S. never had to worry about a major war on its borders. Self-sufficient: The U.S. is probably the one country that is fairly self-sufficient in all fundamental resources. People Flight of the smart: Throughout the ages, the U.S.’s remote location helped cherry-pick the immigrants. Education: For each wave of immigrants, education was a top priority. Naturally entrepreneurial: If you had to move this far and then stead a random piece of land in the middle, you need to be naturally entrepreneurial. Leadership More questions on Quora:

10 Reasons why America is a big Superpower - List Dose. The undoubted ruler of the planet earth today is the United States of America, and why not, it has everything in the world required for being the super most power. 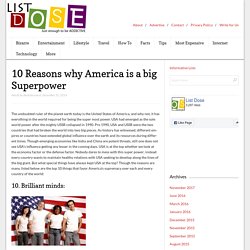 USA had emerged as the sole world power after the mighty USSR collapsed in 1990. Pre 1990, USA and USSR were the two countries that had broken the world into two big pieces. As history has witnessed, different empires or countries have extended global influence over the earth and its resources during different times. Though emerging economies like India and China are potent threats, still one does not see USA’s influence getting any lesser in the coming days. How America became the most powerful country on Earth, in 11 maps. After the world wars and the end of colonialism, the global system went from many competing powers to exactly two: the US and the Soviet Union. 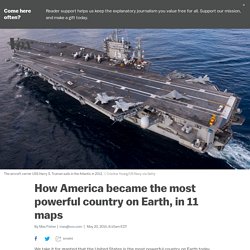 Both had competing ideologies, competing interests in Europe and Asia, and deep mutual distrust. While that might have normally led to war, the horrifying power of nuclear weapons kept them from fighting outright. Instead, the US and Soviet Union competed for global influence. American and Soviet fears of a global struggle became a self-fulfilling prophecy: both launched coups, supported rebellions, backed dictators, and participated in proxy wars in nearly every corner of the world. Both built up systems of alliances, offshore bases, and powerful militaries that allowed each to project power across the globe. 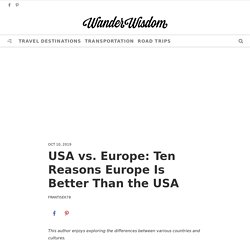 All of the points below are generalizations with many exceptions. However, in essence, these differences do exist between the US and Europe. Of course, there are also many differences between European countries, as well as between different parts of the US, but for the sake of brevity, those have not been explored here. 1. Europeans Work Fewer Hours. It's no secret that Americans are overworked.

Most European countries have much more worker-friendly labor laws than the US. US cosmetics are full of chemicals banned by Europe – why? A brief but telling piece of legislation was put forward in Connecticut in January. 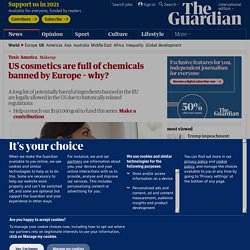 Just three lines in length, the bill calls for any cosmetics in the state to “meet the chemical safety standards established by the European Union”. The move, unlikely to be made law, is the latest signal of mounting anguish over the enfeebled regulation of everyday products in the US compared with European countries.

Across a span of cosmetics, including makeup, toothpaste and shampoo, to items ranging from household cleaners to fruit juice to cheese, hundreds of potentially harmful ingredients banned in the EU are legally allowed in the US. “Many Americans are unaware that they are absorbing untested and unsafe chemicals in their products,” said Alex Bergstein, a state senator who put forward the Connecticut legislation. Bergstein was previously the chair of the Mount Sinai Children’s Environmental health center. What Are The World's Biggest Superpowers?