Artificial-intelligence#:~:text=Leading%20Europe's%20AI%20Research,in%20the%20region%20to%205%2C000. Whether it's the development of a human-like intelligence or the programming of independent problem-solving solutions: in the Greater Zurich Area, the world's best talents work to decode the principles that govern intelligence. 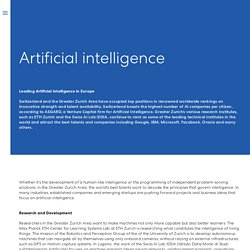 In many industries, established companies and emerging startups are pushing forward projects and business ideas that focus on artificial intelligence. Why Pratt & Whitney’s F135 Fighter Engine Will Be The Most Important Military Franchise Raytheon Technologies Owns. When United Technologies and Raytheon combine later this year, they will form the most broadly diversified, technically proficient aerospace and defense supplier in the world. 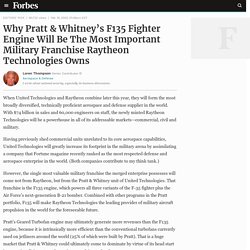 With $74 billion in sales and 60,000 engineers on staff, the newly minted Raytheon Technologies will be a powerhouse in all of its addressable markets—commercial, civil and military. Having previously shed commercial units unrelated to its core aerospace capabilities, United Technologies will greatly increase its footprint in the military arena by assimilating a company that Fortune magazine recently ranked as the most respected defense and aerospace enterprise in the world. (Both companies contribute to my think tank.) New Research Explains How Solar Panels Could Soon Be Generating Power at Night. As beneficial as current solar panel technology has been in our quest to switch to renewable energy, such panels can't generate electricity at night. 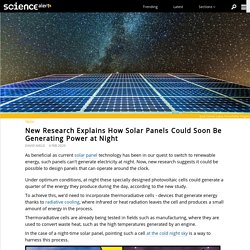 Now, new research suggests it could be possible to design panels that can operate around the clock. Under optimum conditions, at night these specially designed photovoltaic cells could generate a quarter of the energy they produce during the day, according to the new study. To achieve this, we'd need to incorporate thermoradiative cells - devices that generate energy thanks to radiative cooling, where infrared or heat radiation leaves the cell and produces a small amount of energy in the process.

Thermoradiative cells are already being tested in fields such as manufacturing, where they are used to convert waste heat, such as the high temperatures generated by an engine. Self-propelled, onion-like microvehicle can attract, trap, and destroy biological threats. Antibiotics are more efficient when they can act on their target directly at the site of infestation, without dilution. 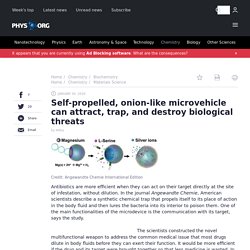 In the journal Angewandte Chemie, American scientists describe a synthetic chemical trap that propels itself to its place of action in the body fluid and then lures the bacteria into its interior to poison them. One of the main functionalities of the microdevice is the communication with its target, says the study. The scientists constructed the novel multifunctional weapon to address the common medical issue that most drugs dilute in body fluids before they can exert their function. It would be more efficient if the drug and its target were brought together so that less medicine is wasted. In association with Joseph Wang at the University of California San Diego, researchers have developed a self-propelling chemical trap to corner and destroy pathogens. Watch Video of One of the World's Most Important Places - The Atlantic. Read: An ancient city’s demise hints at a hidden risk of sea-level rise. 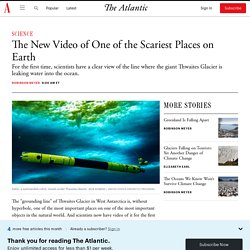 The Full SCI-FI, FANTASY & GENRE Movie Release Schedule. In addition to the plethora of comic book-based superhero movies in the next few years, there are a variety of other films such as science fiction, fantasy and action under the umbrella description of 'genre.' There are no hard lines, but if a film as robots, giant monsters, or aliens, then it's probably on our list. 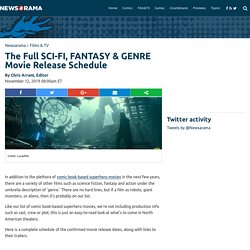 Like our list of comic book-based superhero movies, we're not including production info such as cast, crew or plot; this is just an easy-to-read look at what's to come in North American theaters. Here is a complete schedule of the confirmed movie release dates, along with links to their trailers. Google plans to offer checking accounts next year. Google is planning to offer checking accounts within its Google Pay app, The Wall Street Journal reports. 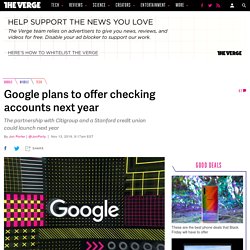 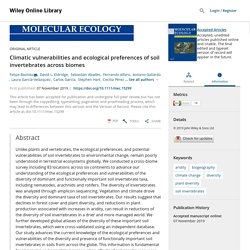 Our results suggest that declines in forest cover and plant diversity, and reductions in plant production associated with increases in aridity, can result in reductions of the diversity of soil invertebrates in a drier and more managed world. Researchers want 10,000 canines to join the Dog Aging Project. Scientists are looking for 10,000 good dogs to take part in a 10-year effort aimed at tracking their health and identifying factors that can lengthen their lifespan. 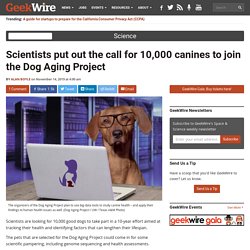 The pets that are selected for the Dog Aging Project could come in for some scientific pampering, including genome sequencing and health assessments. But that doesn’t mean the project’s organizers at the University of Washington, Texas A&M University and other research institutions are totally going to the dogs. The larger purpose of the campaign — and the reason it’s getting $15 million in direct funding from the National Institute on Aging at the National Institutes of Health — is to pick up new clues about the aging process in humans. Researchers can use dogs as a model for human health studies, just as they use lab mice, said project co-director Matt Kaeberlein, a professor of pathology at the UW School of Medicine. The most mind-boggling scientific discoveries of 2019 include the first image of a black hole, a giant squid sighting, and an exoplanet with water vapor. Astronomers, anthropologists, geologists, and many other scientists made mind-boggling breakthroughs in 2019.Some highlights include work that produced the first image of a black hole, traced the origins of modern humans, and predicted future sea-level rise. 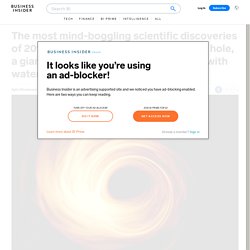 Scientists find a new way to measure gravity. The Mess We've Made of Scientific Publishing. In today’s Martin Center article, Duke University professor John Staddon explains the mess our universities have made of scientific publishing. He writes: “The spread in subscription rates, the vast and still growing number of journals and the natural reluctance of commercial publishers to go to open-access without a pay-to-publish fee, point to several factors that have changed since the days when there were just a handful of scientific journals and a modest number of mostly vocation-oriented scientists: Staddon questions whether we still need expensive print journals. He points to a possible solution: “It would also help if institutions themselves followed the hoped-for government-funding lead and only recognized publications in open-access journals. New evidence shows the first building blocks of life on Earth may have been messier than previously thought.

When the Earth was born, it was a mess. Meteors and lightning storms likely bombarded the planet's surface where nothing except lifeless chemicals could survive. How life formed in this chemical mayhem is a mystery billions of years old. Now, a new study offers evidence that the first building blocks may have matched their environment, starting out messier than previously thought. Life is built with three major components: RNA and DNA—the genetic code that, like construction managers, program how to run and reproduce cells—and proteins, the workers that carry out their instructions. Most likely, the first cells had all three pieces. But first, RNA, DNA or proteins had to form without their partners. Snake stem cells used to create venom-producing organoids.

Organoids have become an important tool for studying many disease processes and testing potential drugs. Surprise discovery shakes up our understanding of gene expression. A group of University of Chicago scientists has uncovered a previously unknown way that our genes are made into reality. Rather than directions going one-way from DNA to RNA to proteins, the latest study shows that RNA itself modulates how DNA is transcribed—using a chemical process that is increasingly apparent to be vital to biology. The discovery has significant implications for our understanding of human disease and drug design. "It appears to be a fundamental pathway we didn't know about.