Twitter. Twitter. Some beautiful "Marine Style" octopus designs on Minoan pottery, from the Heraklion Archaeological Museum on Crete (not sure if they have a Twitter account?) #MuseumsUnlocked… This is the Minoan piece at Heraklion that really floors me. Nothing more beautiful!… Evan Levine sur Twitter : "Back in Athens safe & sound, & already missing #crete, the mountains, and the almonds in bloom. We had a great last day, and @ewesdris pulled rabbits out of his hat to make sure maxed our time before leaving the island. So here’

IC III iv 9* - PHI Greek Inscriptions. Evan Levine sur Twitter : "With all the #Covid_19 uncertainty in #Greece, I’m a day behind on our trip report! I’m also not sure how many more of these we’re going to have, so let’s not waste any more time! Day 4 on #Crete with the @ASCSAthens & it was a. Patrick Leigh Fermor. John Pendlebury at Knossos. 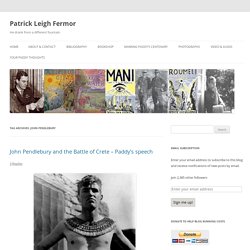 The Blue again #crete #greece… Just before 6am □□ #crete… □The magic of #Crete, the mythical #white_mountains is there for you to discover #chania #trekking #nature #mountains #mountaineering… Out the back garden #crete… If you need a radio station when in Crete this is it .. □ #crete… Monday evening #crete… Agios Georgios Monastery, Selinari #crete… Benefits of getting up early #crete… Monday afternoon #crete… Tuesday morning #crete… Monday evening #crete… Saturday #crete… Roads and bridges in Western Crete destroyed by yet another storm, Oceania. Sadness as historical Alikianos bridge succumbs.… Purple haze #crete… Rugged and unspoilt beauty #south #crete… Breathtaking scenes as strong south winds bring Saharan sand to Crete, turning the snow pink on the mountains.… MulberryHouseCorfu sur Twitter : "All things in Greece -mountains, rivers, seas, valleys, become *humanised*: they speak to a man in a language which is almost human. They do not torment or crushingly overwhelm him; they become his friends and fellow work.

Vasiliki #crete… #cretanvillage Βασιλική… Shades of Crete sur Twitter : "With minutes to spare before the sun set we found the stunning 2800 year old olive tree of Kamilari (means camel rider!). Top tip: don't try to drive down the track - we got stuck! After an hour of reversing, shouting & impo. Her 3,000-Year-Old Bones Showed Unusual Signs of Wear. It Turns Out, She Was a Master Ceramicist. Twitter. Intact late Minoan tomb found in Crete.

I never tire of Chania. I think it's the most beautiful city in Europe... Clouds come floating into my life, no longer to carry rain or usher storm, but to add color to my sunset sky. #crete #Greece #travel… The Minoan Palace of Phaestos,Crete,Greece.… New Pendlebury Blog Post! Enjoy! An Art Nouveau Interpretation of the Minoan World. One of the first objects that visitors encounter in Restoring the Minoans: Elizabeth Price and Sir Arthur Evans at the Institute for the Study of the Ancient World (ISAW) in Manhattan is a forgery. 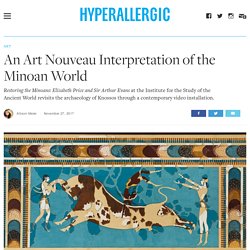 Anointed “Our Lady of the Sports,” the ivory and gold statuette of a bare-chested Minoan goddess raises her arms skyward, recalling the poses of the Snake Goddesses excavated at Knossos. In the early 20th century, Minoan fakes, sometimes fabricated by the same people carrying out archaeological restorations in Crete, appeared on the market for museum and private collectors. Although their authenticity has since been questioned, at the time they were just part of a blurring between past and present, between the authentic and the artificial. It was all fueled by one archaeologist’s passion to reconstruct a civilization from its ruins. Crete in the 1950s: 25 Amazing Photos by a Traveling French Photographer. From French photographer Claude Dervenn is a collection of beautiful black and white photographs of Crete in the 1950s. 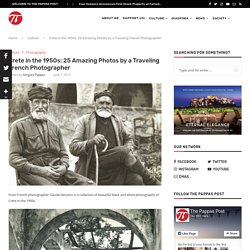 Agia Triada Monastery in Hania A festival in the village of Agios Giorgos Agios Nikolaos Lake St. Recipe for Tsigarelli - Greek Style Greens. Written by GreekBoston.com in Authentic Greek Food Recipes, Recipes for Greek Vegetable Dishes Bowls of stewed or sauteed greens are served with meals all over Greece. 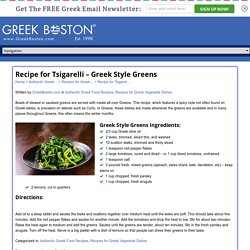 This recipe, which features a spicy note not often found on Greek tables, is prevalent on islands such as Corfu. In Greece, these dishes are made whenever the greens are available and in many places throughout Greece, this often means the winter months. Greek Style Greens Ingredients: 2/3 cup Greek olive oil2 leeks, trimmed, sliced thin, and washed10 scallion stalks, trimmed and thinly sliced1 teaspoon red pepper flakes2 large tomatoes, cored and diced – or 1 cup diced tomatoes, undrained1 teaspoon salt2 pounds fresh, mixed greens (spinach, swiss chard, kale, dandelion, etc) – keep stems on1 cup chopped, fresh parsley1 cup chopped, fresh arugula2 lemons, cut in quarters Directions: Add oil to a deep skillet and sautee the leeks and scallions together over medium heat until the leeks are soft. 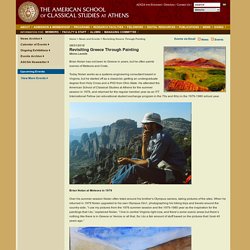 Today Nolan works as a systems engineering consultant based in Virginia, but he started off as a classicist--getting an undergraduate degree from Holy Cross and a PhD from Ohio State. He attended the American School of Classical Studies at Athens for the summer session in 1976, and returned for the regular member year as an ITT International Fellow (an educational student exchange program in the 70s and 80s) in the 1979-1980 school year. Brian Nolan at Meteora in 1979 Over his summer session Nolan often toted around his brother’s Olympus camera, taking pictures of the sites. 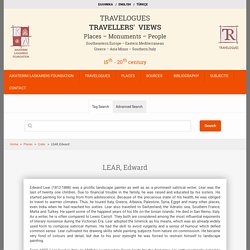 Lear was the last of twenty one children. Due to financial trouble in the family, he was raised and educated by his sisters. He started painting for a living from from adolescence. Because of the precarious state of his health, he was obliged to travel to warmer climates. Ashmolean Museum; Sir Arthur Evans: Home. Evans, Knossos and the Minoans – Facts and Forgeries – Crete.

When you look at the advertisments for Crete, usually provided by the Greek tourist board, a huge amount of publicity is given to the ‘great Minoan civilisation’ discovered by Arthur Evans at the turn of the 20th century. 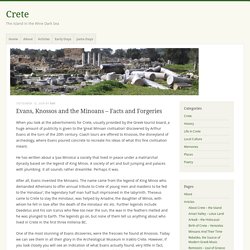 Coach tours are offered to Knossos, the disneyland of archeology, where Evans poured concrete to recreate his ideas of what this fine civilisation meant. He has written about a ‘pax Minoica’ a society that lived in peace under a matriarchal dynasty based on the legend of King Minos. A society of art and bull jumping and palaces with plumbing. It all sounds rather dreamlike. Perhaps it was. Bryn Mawr Classical Review 2002.05.16. Bryn Mawr Classical Review 2002.05.16 J.A. 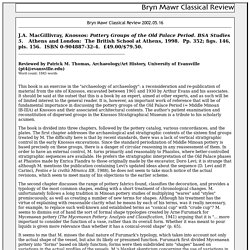 MacGillivray, Knossos: Pottery Groups of the Old Palace Period. BSA Studies 5. Athens and London: The British School at Athens, 1998. Pp. 352; figs. 146, pls. 156. Reviewed by Patrick M. This book is an exercise in the "archaeology of archaeology": a reconsideration and re-publication of material from the site of Knossos, excavated between 1901 and 1930 by Arthur Evans and his associates. The book is divided into three chapters, followed by the pottery catalog, various concordances, and the plates. The second chapter discusses the range of pottery fabrics found, classifies the decoration, and provides a typology of the most common shapes, ending with a short treatment of chronological changes. It seems to me that M. misses the dual nature of Furumark's typology, which takes into account not only the actual shape of the vessel, but also its likely or presumed function.

More could have been done with the classification of motifs. Errata: