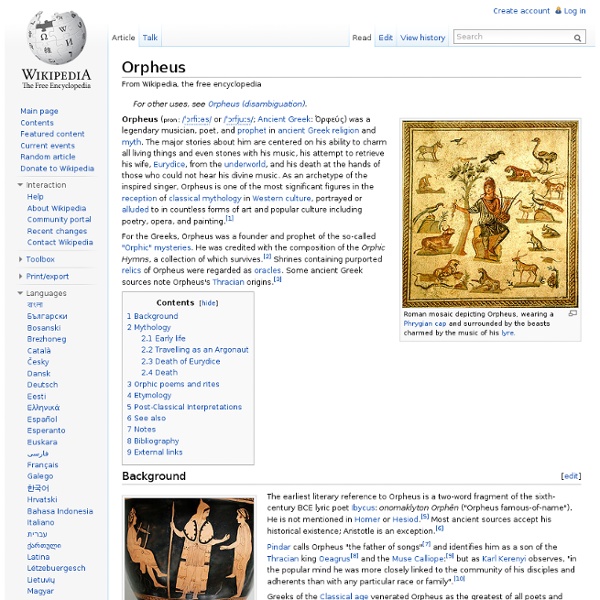 Roman mosaic depicting Orpheus, wearing a Phrygian cap and surrounded by the beasts charmed by the music of his lyre. Orpheus (/ˈɔrfiːəs/ or /ˈɔrfjuːs/; Ancient Greek: Ὀρφεύς) was a legendary musician, poet, and prophet in ancient Greek religion and myth. The major stories about him are centered on his ability to charm all living things and even stones with his music, his attempt to retrieve his wife, Eurydice, from the underworld, and his death at the hands of those who could not hear his divine music. As an archetype of the inspired singer, Orpheus is one of the most significant figures in the reception of classical mythology in Western culture, portrayed or alluded to in countless forms of art and popular culture including poetry, opera, and painting.[1] Background[edit] The earliest literary reference to Orpheus is a two-word fragment of the sixth-century BC lyric poet Ibycus: onomaklyton Orphēn ("Orpheus famous-of-name"). Mythology[edit] Early life[edit] Travelling as an Argonaut[edit]

Proserpina Ancient Roman goddess Cult and myths[edit] Origin as Libera[edit] Libera was officially identified with Proserpina in 205 BC, when she acquired a Romanised form of the Greek mystery rites and their attendant mythology. Hermes ancient Greek god of boundaries, roads, merchants, and thieves Hermes (; Greek: Ἑρμῆς) is a deity in ancient Greek religion and mythology. Hermes is considered the herald of the gods, as well as the protector of human heralds, travellers, thieves,[1] merchants, and orators.[2][3] He is able to move quickly and freely between the worlds of the mortal and the divine, aided by his winged sandals. Hermes plays the role of the psychopomp or "soul guide" — a conductor of souls into the afterlife.[4][5] His attributes and symbols include the herma, the rooster, the tortoise, satchel or pouch, talaria (winged sandals), and winged helmet or simple petasos, as well as the palm tree, goat, the number four, several kinds of fish, and incense.[9] However, his main symbol is the caduceus, a winged staff intertwined with two snakes copulating and carvings of the other gods.[10] His attributes had previously influenced the earlier Etruscan god Turms, a name borrowed from the Greek "herma".[11]

Ptolemy III Euergetes Ptolemy III Euergetes (Greek: Πτολεμαίος Εὐεργέτης Ptolemaios Euergetes "Ptolemy the Benefactor"; c. 280 – November/December 222 BC) was the third king of the Ptolemaic dynasty in Egypt from 246 to 222 BC. The Ptolemaic Kingdom reached the height of its power during his reign. Ptolemy III was the eldest son of Ptolemy II Philadelphus and his first wife Arsinoe I. When Ptolemy III was young, his mother was disgraced and he was removed from the succession. He was restored as heir to the throne in the late 250s BC and succeeded his father as king without issue in 246 BC.

Pygmalion Pygmalion or Pigmalion may refer to: Mythology[edit] Stage[edit] Napoleon Imperial Standard of Napoleon I Napoléon Bonaparte (/nəˈpoʊliən, -ˈpoʊljən/;[2] French: [napɔleɔ̃ bɔnapaʁt], born Napoleone di Buonaparte; 15 August 1769 – 5 May 1821) was a French military and political leader who rose to prominence during the latter stages of the French Revolution and its associated wars. As Napoleon I, he was Emperor of the French from 1804 to 1814 and again in 1815. Napoleon dominated European affairs for almost two decades while leading France against a series of coalitions in the Revolutionary Wars and the Napoleonic Wars.

Ptolemy II Philadelphus Ptolemy II Philadelphus (Greek: Πτολεμαίος Φιλάδελφος, Ptolemaios Philadelphos "Ptolemy, lover of his sister"; 308/9 – 28 January 246 BCE) was the pharaoh of Ptolemaic Egypt from 283 to 246 BCE. He was the son of Ptolemy I Soter, the Macedonian Greek general of Alexander the Great who founded the Ptolemaic Kingdom after the death of Alexander, and queen Berenice I, originally from Macedon in northern Greece. During Ptolemy II's reign, the material and literary splendour of the Alexandrian court was at its height. Pyramus and Thisbe Plot[edit] In Ovid's Metamorphoses, Pyramus and Thisbe are two lovers in the city of Babylon who occupy connected houses/walls, forbidden by their parents to be wed, because of their parents' rivalry. Through a crack in one of the walls, they whisper their love for each other. They arrange to meet near Ninus' tomb under a mulberry tree and state their feelings for each other. Thisbe arrives first, but upon seeing a lioness with a mouth bloody from a recent kill, she flees, leaving behind her veil.

Mencius A key belief of his was that humans are innately good, but that this quality requires cultivation and the right environment to flourish. He also taught that rulers must justify their position of power by acting benevolently towards their subjects, and in this sense they are subordinate to the masses. Life[edit]

Origin myth An origin myth is a myth that purports to describe the origin of some feature of the natural or social world. One type of origin myth is the cosmogonic myth, which describes the creation of the world. However, many cultures have stories set after the cosmogonic myth, which describe the origin of natural phenomena and human institutions within a preexisting universe. In Graeco-Roman scholarship, the terms etiological myth and aition (from the Ancient Greek αἴτιον, "cause") are sometimes used for a myth that explains an origin, particularly how an object or custom came into existence.