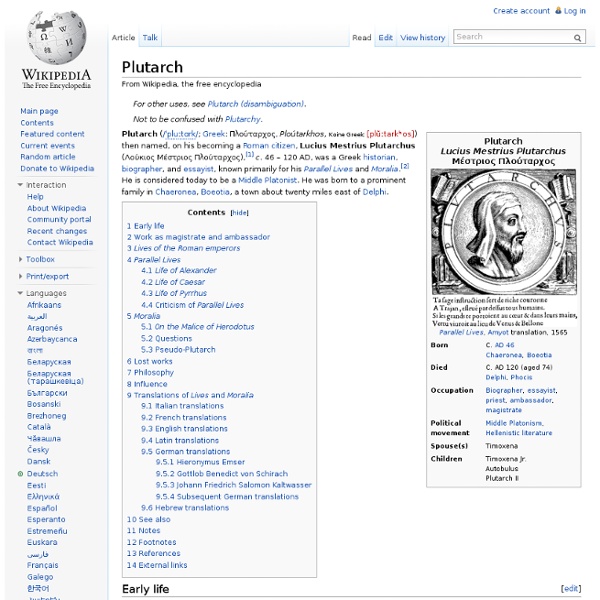 Plutarch (/ˈpluːtɑrk/; Greek: Πλούταρχος, Ploútarkhos, Koine Greek: [plǔːtarkʰos]; later named, on his becoming a Roman citizen, Lucius Mestrius Plutarchus (Λούκιος Μέστριος Πλούταρχος);[a] c. 46 – 120 AD),[1] was a Greek historian, biographer, and essayist, known primarily for his Parallel Lives and Moralia.[2] He is considered today to be a Middle Platonist. Early life[edit] Ruins of the Temple of Apollo at Delphi, where Plutarch served as one of the priests responsible for interpreting the predictions of the oracle. Plutarch was born to a prominent family in the small town of Chaeronea about twenty miles east of Delphi in the Greek region known as Boeotia. His family was wealthy. The name of Plutarch's father has not been preserved, but it was probably Nikarchus (Greek: Nίκαρχoς), from the common habit of Greek families to repeat a name in alternate generations. The exact number of his sons is not certain, although two of them, Autobulus and second Plutarch, are often mentioned.

Second Catilinarian conspiracy Composition of the conspiracy[edit] Promoting his policy of debt relief, Catiline initially also rallied many of the poor to his banner along with a large portion of Sulla’s veterans.[5] Debt had never been greater than in 63 BC since the previous decades of war had led to an era of economic downturn across the Italian countryside.[6] Numerous plebeian farmers lost their farms and were forced to move to the city, where they swelled the numbers of the urban poor.[7] Sulla's veterans were in bad economic straits as well. Desiring to regain their fortunes, they were prepared to march to war under the banner of the "next" Sulla. Thus, many of the plebs eagerly flocked to Catiline and supported him in the hope of the absolution of their debts.

Plotinus Biography[edit] Plotinus had an inherent distrust of materiality (an attitude common to Platonism), holding to the view that phenomena were a poor image or mimicry (mimesis) of something "higher and intelligible" [VI.I] which was the "truer part of genuine Being". This distrust extended to the body, including his own; it is reported by Porphyry that at one point he refused to have his portrait painted, presumably for much the same reasons of dislike. Likewise Plotinus never discussed his ancestry, childhood, or his place or date of birth. From all accounts his personal and social life exhibited the highest moral and spiritual standards. Plotinus took up the study of philosophy at the age of twenty-seven, around the year 232, and travelled to Alexandria to study.

Persius Persius, in full Aulus Persius Flaccus (; 4 December 34, in Volterra – 24 November 62), was a Roman poet and satirist of Etruscan origin. In his works, poems and satires, he shows a stoic wisdom and a strong criticism for what he considered to be the stylistic abuses of his poetic contemporaries. His works, which became very popular in the Middle Ages, were published after his death by his friend and mentor, the stoic philosopher Lucius Annaeus Cornutus. Life[edit] According to the Life contained in the manuscripts, Persius was born into an equestrian family at Volterra (Volaterrae, in Latin), a small Etruscan city in the province of Pisa, of good stock on both parents' side.

Francis Bacon English philosopher and statesman Francis Bacon, 1st Viscount St Alban,[a] Kt PC QC (;[5] 22 January 1561 – 9 April 1626), also known as Lord Verulam, was an English philosopher and statesman who served as Attorney General and as Lord Chancellor of England. His works are credited with developing the scientific method and remained influential through the scientific revolution.[6] Francis Bacon was a patron of libraries and developed a functional system for the cataloguing of books by dividing them into three categories—history, poetry, and philosophy—which could further be divided into more specific subjects and subheadings.

Pedant Person obsessed with detail or process, often negatively perceived Personality[edit] Pedantry is related to personality.[dubious ] One study found that extroverts were more tolerant of typing mistakes than introverts.[1] Etymology[edit] Shabaka Stone Shabaka Stone on display in The British Museum. The stone measures 0.66 by 1.37 metres (2 ft 2 in by 4 ft 6 in). The Shabaka Stone, sometimes Shabaqo, is a relic incised with an ancient Egyptian religious text, which dates from the Twenty-fifth Dynasty of Egypt.[1] In later years, the stone was likely used as a millstone, which damaged the hieroglyphs. This damage is accompanied by other intentional defacements, leaving the hieroglyphic inscription in poor condition. Provenance[edit] Historical origins[edit] Equites The equites (; Latin: eques nom. singular; sometimes referred to as "knights" in modern times) constituted the second of the property-based classes of ancient Rome, ranking below the senatorial class. A member of the equestrian order was known as an eques. Description[edit] By the time of the Second Punic War (218–202 BC), all the members of the first class of commoners were required to serve as cavalrymen. The presence of equites in the Roman cavalry diminished steadily in the period 200–88 BC as only equites could serve as the army's senior officers; as the number of legions proliferated fewer were available for ordinary cavalry service. After c. 88 BC, equites were no longer drafted into the legionary cavalry, although they remained technically liable to such service throughout the principate era (to AD 284).