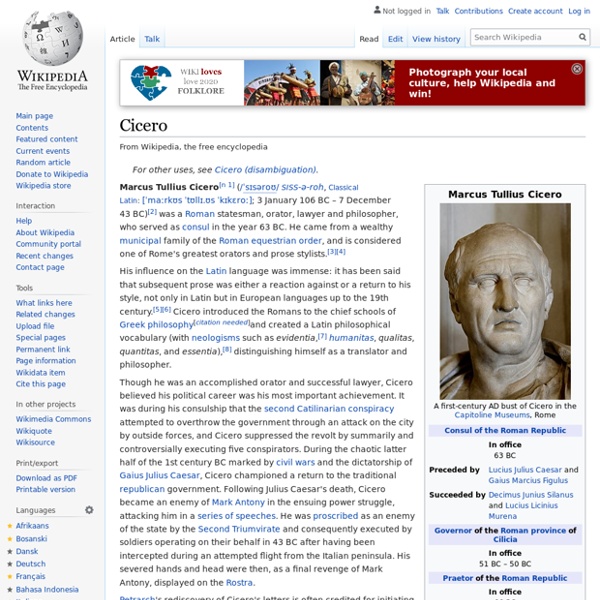 1st-century BC Roman lawyer, orator, philosopher and statesman Marcus Tullius Cicero[n 1] ( SISS-ə-roh, Classical Latin: [ˈmaːrkʊs ˈtʊllɪ.ʊs ˈkɪkɛroː]; 3 January 106 BC – 7 December 43 BC)[2] was a Roman statesman, orator, lawyer and philosopher, who served as consul in the year 63 BC. He came from a wealthy municipal family of the Roman equestrian order, and is considered one of Rome's greatest orators and prose stylists.[3][4] His influence on the Latin language was immense: it has been said that subsequent prose was either a reaction against or a return to his style, not only in Latin but in European languages up to the 19th century.[5][6] Cicero introduced the Romans to the chief schools of Greek philosophy[citation needed]and created a Latin philosophical vocabulary (with neologisms such as evidentia,[7] humanitas, qualitas, quantitas, and essentia),[8] distinguishing himself as a translator and philosopher. Personal life[edit] Early life[edit] Family[edit] Public career[edit]

Quintus Hortensius Quintus Hortensius Hortalus (114 BC – 50 BC) was a Roman Optimate[1] and orator. He was consul in 69 BC alongside Quintus Caecilius Metellus Creticus. Biography[edit] To this circumstance perhaps, as well as to his own merits, Hortensius may have been indebted for much of his success. Many of his clients were the governors of provinces which they were accused of having plundered. Equites The equites (; Latin: eques nom. singular; sometimes referred to as "knights" in modern times) constituted the second of the property-based classes of ancient Rome, ranking below the senatorial class. A member of the equestrian order was known as an eques. Description[edit]

Allegory of the Cave Allegory by Plato Plato has Socrates describe a group of people who have lived chained to the wall of a cave all of their lives, facing a blank wall. The people watch shadows projected on the wall from objects passing in front of a fire behind them, and give names to these shadows. The shadows are the prisoners' reality. Socrates explains how the philosopher is like a prisoner who is freed from the cave and comes to understand that the shadows on the wall are not reality at all, for he can perceive the true form of reality rather than the manufactured reality that is the shadows seen by the prisoners. The inmates of this place do not even desire to leave their prison, for they know no better life.

Mark Antony Roman politician and general Marcus Antonius[note 1] (14 January 83 BC – 1 August 30 BC), commonly known in English as Mark Antony or Anthony, was a Roman politician and general who played a critical role in the transformation of the Roman Republic from an oligarchy into the autocratic Roman Empire. Early life[edit] Antony's brother Lucius, on a coin issued at Ephesus during his consulship in 41 BC Antony's early life was characterized by a lack of proper parental guidance. Early career[edit]

Tullia It may also refer to : Places and jurisdictions Tullia, Numidia, formerly an Ancient Roman town and diocese in Numidia, presently in Algeria and a Latin Catholic titular see Female given name