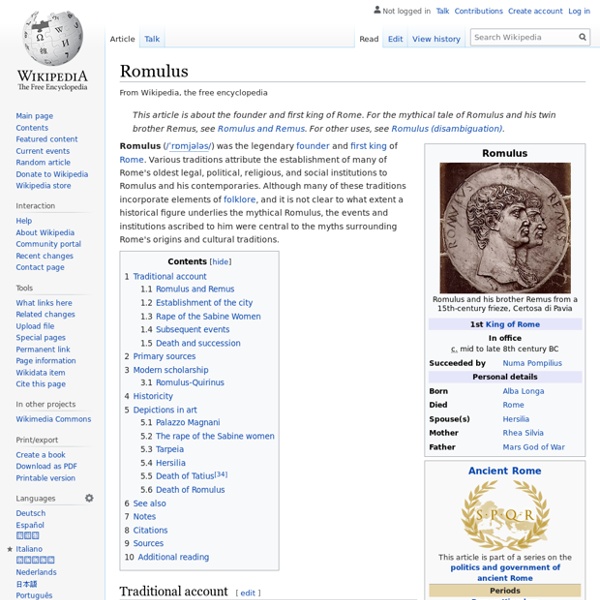 Legendary founder and first king of Rome Romulus () was the legendary founder and first king of Rome. Various traditions attribute the establishment of many of Rome's oldest legal, political, religious, and social institutions to Romulus and his contemporaries. Although many of these traditions incorporate elements of folklore, and it is not clear to what extent a historical figure underlies the mythical Romulus, the events and institutions ascribed to him were central to the myths surrounding Rome's origins and cultural traditions. Traditional account[edit] The myths concerning Romulus involve several distinct episodes and figures: the miraculous birth and youth of Romulus and Remus, his twin brother; Remus' murder and the founding of Rome; the Rape of the Sabine Women; the war with the Sabines; Titus Tatius; the establishment of Roman institutions; and the death or apotheosis of Romulus, and succession of Numa Pompilius. Romulus and Remus[edit] Establishment of the city[edit] Tarpeia[edit]

Mars Fourth planet from the Sun in the Solar System Mars can easily be seen from Earth with the naked eye, as can its reddish coloring. Its apparent magnitude reaches −2.94, which is surpassed only by Venus, the Moon and the Sun.[12] Optical ground-based telescopes are typically limited to resolving features about 300 kilometres (190 mi) across when Earth and Mars are closest because of Earth's atmosphere.[43] Names In English, the planet is named for the Roman god of war,[44] an association made because of its red color, which suggests blood.[45] The adjectival form of Latin Mars is Martius,[46] which provides the English words Martian, used as an adjective or for a putative inhabitant of Mars, and Martial, used as an adjective corresponding to Terrestrial for Earth.[47] In Greek, the planet is known as Ἄρης Arēs, with the inflectional stem Ἄρε- Are-.[48] From this come technical terms such as areology, as well as the adjective Arean[49] and the star name Antares. Physical characteristics

Sabines The Sabines (; Latin: Sabini; Ancient Greek: Σαβῖνοι Sabĩnoi; Italian: Sabini, all exonyms) were an Italic people that lived in the central Apennine Mountains of ancient Italy, also inhabiting Latium north of the Anio before the founding of Rome. Language[edit] There is little record of the Sabine language; however, there are some glosses by ancient commentators, and one or two inscriptions have been tentatively identified as Sabine. There are also personal names in use on Latin inscriptions from the Sabine country, but these are given in Latin form. Robert Seymour Conway, in his Italic Dialects, gives approximately 100 words which vary from being well-attested as Sabine to being possibly of Sabine origin.

Quintus Fabius Pictor Life[edit] Q. Fabius Pictor led Roman forces against the Gauls in 225 BC. In 216 BC, during the Second Punic War, he was appointed to travel to the oracle at Delphi in Greece to seek guidance after the disastrous Roman defeat to Hannibal at Cannae. Work[edit] Terracina Comune in Lazio, Italy Terracina is a city and comune of the province of Latina - (until 1934 of the province of Rome), Italy, 76 kilometres (47 miles) southeast of Rome by rail and 56 kilometres (35 mi) by the Via Appia by car. Platform of sanctuary and temple of "Jupiter Anxur".

Rhea Silvia The legend[edit] Romulus would go on to found Rome, overthrow Amulius, and reinstate Numitor as King of Alba Longa. In Roman art and literature[edit] In a version presented by Ovid,[7] it is the river Anio who takes pity on her and invites her to rule in his realm. Etymology[edit] Numa Pompilius King of Rome Numa Pompilius (; 753–673 BC; reigned 715–673 BC) was the legendary second king of Rome,[1] succeeding Romulus. He was of Sabine origin, and many of Rome's most important religious and political institutions are attributed to him. Genealogy[edit] Titus Livius (Livy) and Plutarch refer to the story that Numa was instructed in philosophy by Pythagoras but discredit it as chronologically and geographically implausible.[3] Kingship[edit]

Gauls Group of Celtic peoples of Western Europe The Gauls (Latin: Galli, Ancient Greek: Γαλάται, Galátai) were a group of Celtic peoples of Continental Europe in the Iron Age and the Roman period (roughly from the 5th century BC to the 5th century AD). The area they originally inhabited was known as Gaul. Their Gaulish language forms the main branch of the Continental Celtic languages. Jupiter Fifth planet from the Sun in the Solar System Formation and migration Astronomers have discovered nearly 500 planetary systems with multiple planets.

Quirinus In Roman mythology and religion, Quirinus ( kwi-RY-nəs,[1] Latin: [kᶣɪˈriːnʊs]) is an early god of the Roman state. In Augustan Rome, Quirinus was also an epithet of Janus, as Janus Quirinus.[2] His name may be derived from the Sabine word quiris "spear". Etymology[edit] Quirinus is probably an adjective meaning "wielder of the spear" (quiris, in the Sabine language, cf. Tullus Hostilius Tullus Hostilius (r. 673–642 BC) was the legendary third king of Rome. He succeeded Numa Pompilius and was succeeded by Ancus Marcius. Unlike his predecessor, Tullus was known as a warlike king.[1] Tullus Hostilius was the grandson of Hostus Hostilius, who had fought with Romulus and died during the Sabine invasion of Rome.[2] The principal feature of Tullus' reign was his defeat of Alba Longa. After Alba Longa was beaten (by the victory of three Roman champions over three Albans), Alba Longa became Rome's vassal state.

Barcids Background[edit] During the 3rd century BC, the Barcids comprised one of the leading families in the ruling oligarchy of Carthage. Realizing that the expansion of the Roman Republic into the Mediterranean Sea threatened the mercantile power of Carthage, they fought in the First Punic War (264–241 BC) and prepared themselves for the Second Punic War (218–201 BC). The Barcids founded several Carthaginian cities in the Iberian peninsula, some of which still exist today. Note for example Mahón and Qart Hadast (more famous under the Latin translation of its name: "Carthago Nova" or New Carthage) which currently bears the name of Cartagena in modern-day Spain. Lucius Tarquinius Priscus Lucius Tarquinius Priscus, or Tarquin the Elder, was the legendary fifth king of Rome from 616 to 579 BC. His wife was Tanaquil. Early life[edit] According to Livy, Tarquin came from Etruria. Livy claims that his original Etruscan name was Lucumo, but since lucumo (Etruscan Lauchume) is the Etruscan word for "king", there is reason to believe that Priscus' name and title have been confused in the official tradition. After inheriting his father's entire fortune, Lucius attempted to gain a political office.

Ops Ancient Roman goddess of fertility and the earth In ancient Roman religion, Ops or Opis (Latin: "Plenty") was a fertility deity and earth goddess of Sabine origin. Iconography[edit] Name[edit] The Latin word ops means "riches, goods, abundance, gifts, munificence, plenty".[2] The word is also related to opus, which means "work", particularly in the sense of "working the earth, ploughing, sowing". Ancus Marcius First acts as King[edit] According to Livy, his first act as king was to order the Pontifex Maximus to copy the text concerning the performance of public ceremonies of religion from the commentaries of Numa Pompilius to be displayed to the public, so that the rites of religion should no longer be neglected or improperly performed.[4] War[edit]