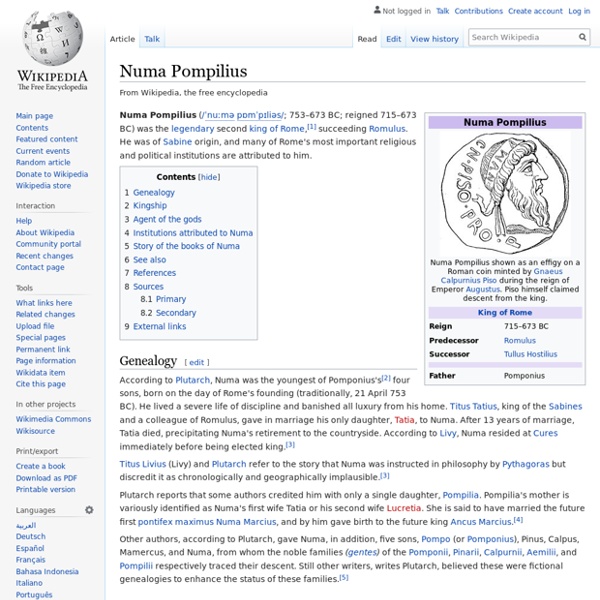 King of Rome Numa Pompilius (; 753–673 BC; reigned 715–673 BC) was the legendary second king of Rome,[1] succeeding Romulus. He was of Sabine origin, and many of Rome's most important religious and political institutions are attributed to him. Genealogy[edit] Titus Livius (Livy) and Plutarch refer to the story that Numa was instructed in philosophy by Pythagoras but discredit it as chronologically and geographically implausible.[3] Kingship[edit] After the death of Romulus, there was an interregnum of one year in which the royal power was exercised by members of the Senate in rotation for five days in a row. According to Plutarch, Numa's first act was to disband the personal guard of 300 so-called "Celeres" (the "Swift") with which Romulus permanently surrounded himself.[6] The gesture is variously interpreted as self-protection in the face of their questionable loyalty, a sign of humility, or a signal of peace and moderation. Based on Roman chronology, Numa died of old age in 673 BC. ...

Pygmalion Pygmalion or Pigmalion may refer to: Mythology[edit] Stage[edit] Iole Iole with Heracles in the house of Eurytus, as depicted on the 7th century Eurytos column-crater, Louvre. Iole's name is given in its Corinthian (Doric) form FIOLA ("Viola"), with digamma and a local Σ-shaped form for iota. It's located under the name of Herakles in the right upper corner of the image. Mythology[edit] Heracles' love for Iole leads to his death[edit]

Pyramus and Thisbe Plot[edit] In Ovid's Metamorphoses, Pyramus and Thisbe are two lovers in the city of Babylon who occupy connected houses/walls, forbidden by their parents to be wed, because of their parents' rivalry. Through a crack in one of the walls, they whisper their love for each other. They arrange to meet near Ninus' tomb under a mulberry tree and state their feelings for each other. Thisbe arrives first, but upon seeing a lioness with a mouth bloody from a recent kill, she flees, leaving behind her veil.

King Eurytus of Oechalia Image of King Eurytus of Oechalia in an Etruscan vase from Caere. Eurytus is depicted next to Heracles during a symposium. Krater of corinthian columns called 'Krater of Eurytus', circa 600 B.C. Family[edit] Eurytus' grandfather was Apollo, the archer-god, and was also a famed archer. Eurytus has been noted by some as the one who taught Heracles the art of archery. Pyrrha Deucalion and Pyrrha throwing rocks that become babies. Etymology[edit] In Latin the word pyrrhus means red from the Greek adjective πυρρός, purrhos, i.e. "flame coloured", "the colour of fire", "fiery red" or simply "red" or "reddish".[2][3] Pyrrha was evidently named after her red hair as Horace[4] and Ovid describes her as red haired. Mythology[edit] When Zeus decided to end the Bronze Age with the great deluge, Deucalion and his wife, Pyrrha, were the only survivors.

Dīs Pater 18th century painting showing Mercury (center), Flora (right), and Dīs Pater (left), from Convito per le nozze di Amore e Psiche (The Wedding Feast of Cupid & Psyche), Galleria Nazionale di Palazzo Spinola, Genova It is often thought that Dīs Pater was also a Celtic god. This confusion arises from the second-hand citation of one of Julius Caesar's comments in his Commentaries on the Gallic Wars (VI:18), where he says that the Gauls all claimed descent from Dīs Pater. However, Caesar's remark is a clear example of interpretatio Romana: what Caesar meant was that the Gauls all claimed descent from a Gaulish god that reminded him of the Roman Dīs Pater, a scholia on the Pharsalia equates Dis Pater with Taranis, the chief sky deity in the Gaulish religion.[1] Different possible candidates exist for this role in Celtic religion, such as Gaulish Sucellus, Irish Donn and Welsh Beli Mawr, among others.

Ionians The location of ancient Ionia on the coast of modern-day Turkey. When referring to populations, “Ionian” defines several groups in Classical Greece. In its narrowest sense, the term referred to the region of Ionia in Asia Minor. In its broadest sense, it could be used to describe all speakers of the Ionic dialect, which in addition to those in Ionia proper also included the Greek populations of Euboea, the Cyclades, and many cities founded by Ionian colonists.