What is a concept store? Despite the popularity of online shopping, brick-and-mortar stores are fighting back. 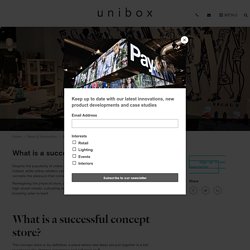 Indeed, while online retailers can be hard to beat when it comes to price, they can’t recreate the pleasure that comes from feeling and handling products before purchase. Opening A Concept Store: How To Get Things Off The Ground. In this dog-eat-dog business world, it’s important to stand out and be different from the competition. 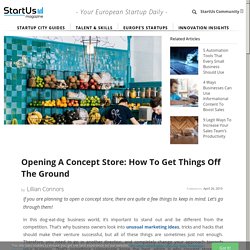 That’s why business owners look into unusual marketing ideas, tricks and hacks that should make their venture successful, but all of these things are sometimes just not enough. Therefore, you need to go in another direction, and completely change your approach towards your business. That’s something salespeople know the best, which is why concept stores are becoming more popular than ever – they’re attracting more people than your regular shops, creating a different shopping atmosphere, and earning more money.

So, if you too are thinking about opening a concept store, here’s what you need to know to get things off the ground. Initial Considerations The problem with concept stores is that not enough people know what they’re really about – yes, their number is constantly on the rise, but that still doesn’t mean they’re as popular as you’d think. Brand Philosophy Store Layout. Read an excerpt from Chimamanda Ngozi Adichie's short story Zikora. Os guerreiros das três cabeças do rio Onzo. Crescer em tempo de guerra. Há ainda um longo caminho a percorrer, para que se acalmem as guerras da memória, quer as que perturbam o trabalho dos historiadores, quer as que se travam na memória daqueles que as viveram. 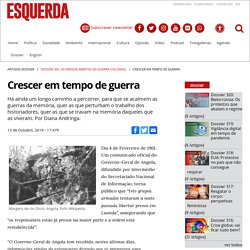 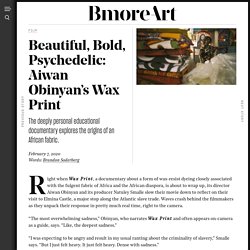 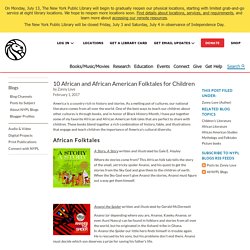 As a melting pot of cultures, our national literature comes from all over the world. One of the best ways to teach our children about other cultures is through books, and in honor of Black History Month, I have put together some of my favorite African and African American folk tales that are perfect to share with children. These books blend together a rich combination of history, fable, and illustrations that engage and teach children the importance of America's cultural diversity.

African Folktales A Story, A Story written and illustrated by Gale E. How to End the Slavery Blame-Game. Our new understanding of the scope of African involvement in the slave trade is not historical guesswork. 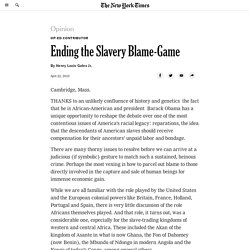 Thanks to the Trans-Atlantic Slave Trade Database, directed by the historian David Eltis of Emory University, we now know the ports from which more than 450,000 of our African ancestors were shipped out to what is now the United States (the database has records of 12.5 million people shipped to all parts of the New World from 1514 to 1866). About 16 percent of United States slaves came from eastern Nigeria, while 24 percent came from the Congo and Angola. African Participation and Resistance to the Trade · African Passages, Lowcountry Adaptations · Lowcountry Digital History Initiative. Mossi horsemen, created by J.W. 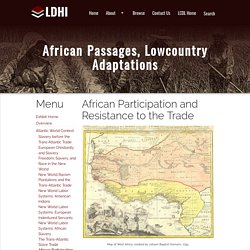 Buel, 1890. The Mossi Kingdoms resisted the trans-Saharan slave trade and slave raiding from the Ghana, Mali, and Songhai Empires in West Africa, but with the expansion of the trans-Atlantic slave trade, they became involved in slave trading in the 1800s. With some early exceptions, Europeans were not able to independently enter the West and Central African interior to capture Africans and force them onto ships to the Americas. Bring back Africa's tribal chieftains.

SIR - R W Johnson's article on Africa (May 22) was interesting, but his "solution" will solve nothing. 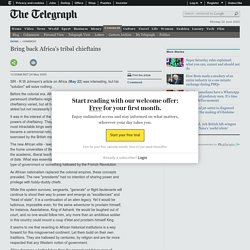 Before the colonial era, Africa consisted of many kingdoms, in which paramount chieftains reigned over their tribes. The institutions of chieftaincy varied, but all had a royal family of whom one member, the ablest but not necessarily the eldest, was elected by a council of elders. It was in the interest of the colonial administrations to weaken the powers of chieftaincy. They could not abolish the institution, although the most intractable kings were sent into exile. The last kings of Africa. Every week, Inside Africa takes its viewers on a journey across Africa, exploring the true diversity and depth of different cultures, countries and regions. 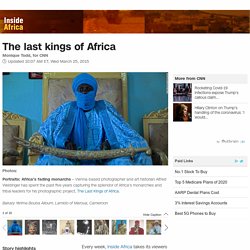 "I have a sort of deadline for myself -- which is the end of next year. It's not a question of the amount of kings or tribal leaders, it's just a question of countries," says Weidinger, who plans to visit Africa twice this year and six times in 2015. "There are still countries I definitely want to visit, for example Swaziland and the southern part of Sudan. " How Africa Became Black. Despite all I'd read about Africa, my first impressions upon being there were overwhelming. 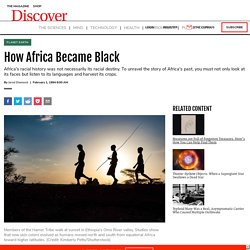 As I walked the streets of Windhoek, the capital of newly independent Namibia, I saw black Herero people and black Ovambo; I saw Nama, a group quite unlike the blacks in appearance; I saw whites, descendants of recent European immigrants; and outside Windhoek I saw the last of the formerly widespread Kalahari Bushmen struggling for survival. Womanism. Unification is a key cornerstone of womanist ideology. Womanism is a social theory based on the history and everyday experiences of women of color, especially black women. It seeks, according to womanist scholar Layli Maparyan (Phillips), to "restore the balance between people and the environment/nature and reconcil[e] human life with the spiritual dimension".[1] Writer Alice Walker coined the term womanist in a short story, "Coming Apart", in 1979.[3][4] Since Walker's initial use, the term has evolved to envelop varied, and often opposing interpretations of conceptions such as feminism, men, and blackness.[5] Theory[edit]

The 33-Year-Old Who Left A Six-Figure Job To Start A Travel Company. In 2017, Jessica Nabongo spent only 21% of the year at home. Bouncing from places like Sri Lanka to the Maldives or from South Africa to Mozambique, she visited 53 countries, 38 of which were new to her. That's over 189,000 miles on 131 flights. Whew. The Provocateur Behind Beyoncé, Rihanna, and Issa Rae. Melina Matsoukas, a director of music videos and television shows, had just returned home from a trip to Cuba when she got a call from Beyoncé, asking her to direct a video for a song called “Formation.” Matsoukas had directed nine of Beyoncé’s videos, and considered her “family.” But this assignment was unusually demanding. Beyoncé was working on “Lemonade,” a deeply personal “visual album” that touches on betrayals in black marriages—her parents’ and, reportedly, her own. “Formation” would be the first single, and an introduction to Beyoncé’s new aesthetic: both vulnerable and political.

She wanted to release the song the day before she performed it at the Super Bowl, which meant that Matsoukas would have to submit a video within a few weeks. The Fitzwilliam Museum : Kemet. Iwalewa House: showcase for African art and culture. The town of Bayreuth in southern Germany is known to classical music fans around the world over for its annual Richard Wagner Festival. But the town also has strong ties to Africa, strengthened by the reopening of Iwalewa House. This is a meeting place rather than a museum, more of a cultural center than a research institute, yet it is nevertheless an integral part of the University of Bayreuth which has a focus on research in Africa. Iwalewa House functions as a link between academic teaching, interest among the general public and African artists. Women in the Arts. Indigenous Cultural Entrepreneurship in South Africa.

South Africa consists of people who live out their culture in different or in similar ways. Culture includes all the various languages which people speak as their mother tongue and as a second or even a third language. It also includes the music, literature, visual arts, dance, drama, oral traditions, traditional practices which include food, fashion, architecture and heritage and the particular beliefs of a cultural group which all contribute to a unique way of life that is in certain ways distinct from that of another cultural group. Defining Cultural Entrepreneurship. Cultural Entrepreneurship is difficult to define. Are we taking a wide definition of ‘culture’ to include a ‘way of life’ or are we taking about the ‘arts’ or the ‘creative industries’?

Of course, there is no single definition. In the Guardian’s Secret Entrepreneur series, there is a debate about whether or not a definition for social enterprise is important. According to the Secret Entrepreneur: The merits of Cultural Entrepreneurship in Africa. I have come across an article dating back to 2009 by Peter Musa published by ‘D+C Development and Cooperation‘, a website and a monthly print magazine funded by Germany’s Federal Ministry for Economic Cooperation and Development and commissioned by ENGAGEMENT GLOBAL.

The article is entitled “The merits of Cultural Entrepreneurship in Africa – Becoming active“. The author suggests African cultural entrepreneurs to embrace an active position as professionals instead of waiting for government support. The merits of cultural entrepreneurship in Africa. The wealth of African culture makes the continent a fascinating destination for tourists, yet its full potential remains largely unknown. The Role of Culture in Doing Business in Africa. Culture refers to the accepted norms and values and rational behaviour of groups. The Hidden Power of Culture. The Power of Culture – Delegation of the European Union to the United States. One thing I’ve come to understand during my years as a diplomat is the power of culture. What is a concept store? 50 Best Concept Stores in the World.