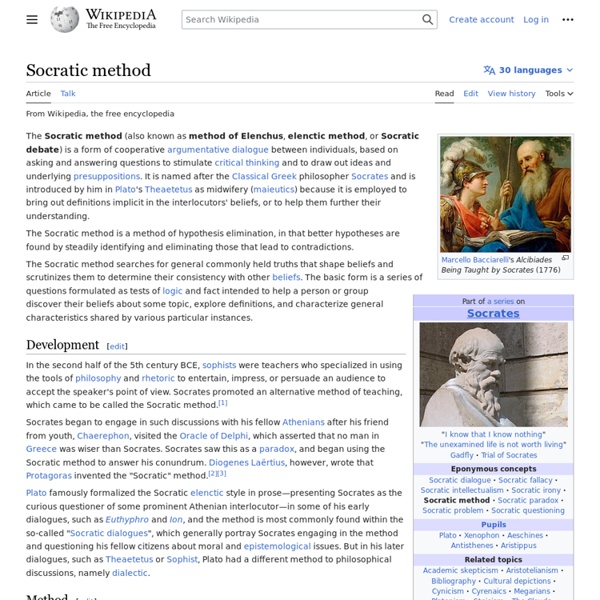 Type of dialog or debate The Socratic method is a method of hypothesis elimination, in that better hypotheses are found by steadily identifying and eliminating those that lead to contradictions. The Socratic method searches for general, commonly held truths that shape beliefs and scrutinizes them to determine their consistency with other beliefs. The basic form is a series of questions formulated as tests of logic and fact intended to help a person or group discover their beliefs about some topic; exploring definitions, and seeking to characterize general characteristics shared by various particular instances. Development[edit] In the second half of the 5th century BC, sophists were teachers who specialized in using the tools of philosophy and rhetoric to entertain, impress, or persuade an audience to accept the speaker's point of view. Method[edit] Elenchus (Ancient Greek: ἔλεγχος, romanized: elenkhos, lit. W. Application[edit] Socratic Circles[edit] Text selection[edit] Socratic Circle texts

House of Bourbon We ask you, humbly, to help. Hi reader in Canada, if you use Wikipedia a lot, this message is for you. It's a little awkward to ask, but this Thursday we need your help. We’re not salespeople. We’re librarians, archivists, and information junkies. We depend on donations averaging $15, but fewer than 1% of readers give. Anthropomorphism When you talk to your dog, your computer, your teddy bear, or your car as if you were speaking to another person, you are anthropomorphizing—or attributing human characteristics like emotions and intent to a non-human entity. Anthropomorphism is a universal mental process—pretty much everyone does it—but research shows that the degree to which individuals anthropomorphize can have significant consequences in their lives. Ascribing human qualities to inanimate objects is generally associated with innocuous, often positive effects like "cuteness," humor, empowerment, and a mature sense of responsibility.

Socratic dialogue A genre of literary prose Socratic dialogue (Ancient Greek: Σωκρατικὸς λόγος) is a genre of literary prose developed in Greece at the turn of the fourth century BC. It is preserved in the works of Plato and Xenophon. House of Windsor The House of Windsor is the reigning royal house of the United Kingdom and the other Commonwealth realms. The dynasty is of German paternal descent and was originally a branch of the House of Saxe-Coburg and Gotha, itself derived from the House of Wettin, which succeeded the House of Hanover to the British monarchy following the death of Queen Victoria, wife of Albert, Prince Consort. The name was changed from Saxe-Coburg and Gotha to the English Windsor (from "Windsor Castle"[1]) in 1917 because of anti-German sentiment in the British Empire during World War I.[2] There have been four British monarchs of the house of Windsor to date: three kings and the present queen, Elizabeth II.

Anthropomorphism Personification is the related attribution of human form and characteristics to abstract concepts such as nations, emotions, and natural forces, such as seasons and weather. Both have ancient roots as storytelling and artistic devices, and most cultures have traditional fables with anthropomorphized animals as characters. People have also routinely attributed human emotions and behavioural traits to wild as well as domesticated animals.[3] Socratic questioning Socratic questioning (or Socratic maieutics)[1] was named after Socrates, who was a philosopher in c. 470 BCE–c. 399 BCE[2]. Socrates utilized an educational method that focused on discovering answers by asking questions from his students. Socrates believed that "the disciplined practice of thoughtful questioning enables the scholar/student to examine ideas and be able to determine the validity of those ideas" [3]. Plato, a student of Socrates, described this rigorous method of teaching to explain that the teacher assumes an ignorant mindset in order to compel the student to assume the highest level of knowledge [4].

Imagination Imagination is the capacity to produce images, ideas and sensations in the mind without any immediate input of the senses (such as seeing or hearing). Imagination helps make knowledge applicable in solving problems and is fundamental to integrating experience and the learning process.[1][2][3][4] A basic training for imagination is listening to storytelling (narrative),[1][5] in which the exactness of the chosen words is the fundamental factor to "evoke worlds".[6] Imagination is a cognitive process used in mental functioning and sometimes used in conjunction with psychological imagery. The cognate term of mental imagery may be used in psychology for denoting the process of reviving in the mind recollections of objects formerly given in sense perception. Imagination can also be expressed through stories such as fairy tales or fantasies. Children often use such narratives and pretend play in order to exercise their imaginations.