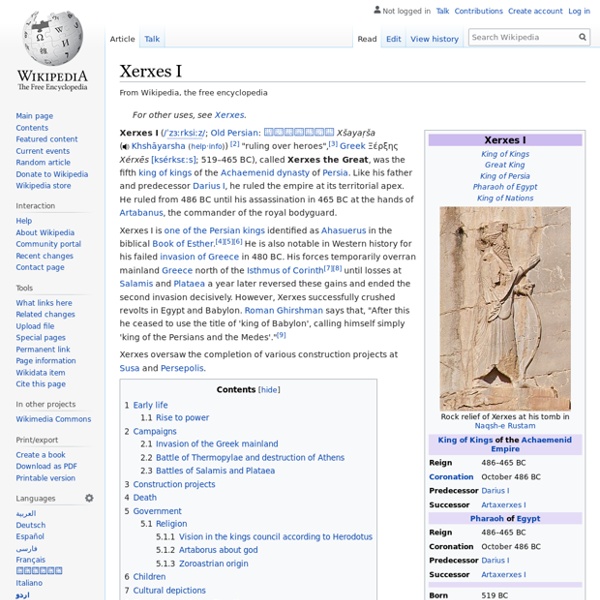 Ancient Persian king King of Kings Xerxes I (; Old Persian: 𐎧𐏁𐎹𐎠𐎼𐏁𐎠 Xšayaṛša ( Khshāyarsha ) [2] "ruling over heroes",[3] Greek Ξέρξης Xérxēs [ksérksɛːs]; 519–465 BC), called Xerxes the Great, was the fifth king of kings of the Achaemenid dynasty of Persia. Like his father and predecessor Darius I, he ruled the empire at its territorial apex. He ruled from 486 BC until his assassination in 465 BC at the hands of Artabanus, the commander of the royal bodyguard. Xerxes I is one of the Persian kings identified as Ahasuerus in the biblical Book of Esther.[4][5][6] He is also notable in Western history for his failed invasion of Greece in 480 BC. Xerxes oversaw the completion of various construction projects at Susa and Persepolis. Early life[edit] Rise to power[edit] Xerxes was born to Darius I and Atossa (daughter of Cyrus the Great). Probable depiction of Xerxes I as crown-prince, in the Audience scene of Darius, Persepolis. Campaigns[edit] Invasion of the Greek mainland[edit] Death[edit]

Seneca the Elder Background[edit] Seneca the Elder is the first of the gens Annaea of whom there is definite knowledge.[1] His praenomen is uncertain. In the renaissance his name and his works became confused with his son Lucius Annaeus Seneca.[2] In the early 16th century Raphael of Volterra saw that there must be two different men. He noted that two of the elder Seneca's grandsons were called Marcus and since there was a Roman custom for boys to be given the name of their grandfather, Raphael adopted the name of Marcus for the elder Seneca.[2] Until the 20th century this was used as the standard praenomen.

Aristides Athenian general and statesman Aristides (; Greek: Ἀριστείδης, Aristeides; 530–468 BC) was an ancient Athenian statesman. Nicknamed "the Just", he flourished in the early quarter of Athens' Classical period and is remembered for his generalship in the Persian War. Ancus Marcius First acts as King[edit] According to Livy, his first act as king was to order the Pontifex Maximus to copy the text concerning the performance of public ceremonies of religion from the commentaries of Numa Pompilius to be displayed to the public, so that the rites of religion should no longer be neglected or improperly performed.[4] War[edit] He waged war successfully against the Latins, and a number of them were settled on the Aventine Hill.[6] According to Livy the war was commenced by the Latins who anticipated Ancus would follow the pious pursuit of peace adopted by his grandfather, Numa Pompilius.

Miltiades Miltiades (; Greek: Μιλτιάδης; c. 550 – 489 BC), also known as Miltiades the Younger, was a Greek Athenian citizen known mostly for his role in the Battle of Marathon, as well as for his downfall afterwards. He was the son of Cimon Coalemos, a renowned Olympic chariot-racer, and the father of Cimon, the noted Athenian statesman. Family[edit] Tullus Hostilius Tullus Hostilius (r. 673–642 BC) was the legendary third king of Rome. He succeeded Numa Pompilius and was succeeded by Ancus Marcius. Unlike his predecessor, Tullus was known as a warlike king.[1] Artemisia I of Caria Queen of Halicarnassus, Kos, Nisyros and Kalymnos Artemisia I of Caria (Ancient Greek: Ἀρτεμισία; fl. 480 BC) was a Greek queen of the ancient Greek city-state of Halicarnassus and of the nearby islands of Kos, Nisyros and Kalymnos,[2] within the Achaemenid satrapy of Caria, in about 480 BC.[2] She fought as an ally of Xerxes I, King of Persia against the independent Greek city states during the second Persian invasion of Greece.[3] She personally commanded her contribution of five ships at the naval battle of Artemisium[4] and in the naval Battle of Salamis in 480 BC. She is mostly known through the writings of Herodotus, himself a native of Halicarnassus, who praises her courage and the respect in which Xerxes held her.[5][6]

Numa Pompilius King of Rome Numa Pompilius (; 753–673 BC; reigned 715–673 BC) was the legendary second king of Rome,[1] succeeding Romulus. He was of Sabine origin, and many of Rome's most important religious and political institutions are attributed to him. Biography & Facts Themistocles, (born c. 524 bce—died c. 460), Athenian politician and naval strategist who was the creator of Athenian sea power and the chief saviour of Greece from subjection to the Persian empire at the Battle of Salamis in 480 bce. Early life Themistocles’ father, Neocles, came of the aristocratic Lycomid family and was not poor, but his mother was a concubine, non-Athenian and possibly non-Greek. He thus owed his citizenship to the legislation of Cleisthenes, which in 508 had made citizens of all free men of Athens. This no doubt contributed to Themistocles’ democratic sympathies.

Sabines The Sabines (; Latin: Sabini; Ancient Greek: Σαβῖνοι Sabĩnoi; Italian: Sabini, all exonyms) were an Italic people that lived in the central Apennine Mountains of ancient Italy, also inhabiting Latium north of the Anio before the founding of Rome. Language[edit] There is little record of the Sabine language; however, there are some glosses by ancient commentators, and one or two inscriptions have been tentatively identified as Sabine. There are also personal names in use on Latin inscriptions from the Sabine country, but these are given in Latin form. Robert Seymour Conway, in his Italic Dialects, gives approximately 100 words which vary from being well-attested as Sabine to being possibly of Sabine origin. Historical geography[edit]

Themistocles - Livius Themistocles (c.525-459): Athenian military commander, statesman, and one of the main architects of the Athenian Empire. Early Career Themistocles was born in a village named Phrearrhioi as the son of a man named Neocles. His mother was a non-Athenian from Thrace or Caria. According to Themistocles' biographer Plutarch of Chaeronea, the young man "was of a vehement and impetuous nature, of a quick apprehension, and a strong and aspiring bent for action and great affairs", but this is probably nothing but a retroprojection. In Antiquity, it was widely believed that great statesmen already showed their qualities when they were still young. Romulus Legendary founder and first king of Rome Romulus () was the legendary founder and first king of Rome. Various traditions attribute the establishment of many of Rome's oldest legal, political, religious, and social institutions to Romulus and his contemporaries. Although many of these traditions incorporate elements of folklore, and it is not clear to what extent a historical figure underlies the mythical Romulus, the events and institutions ascribed to him were central to the myths surrounding Rome's origins and cultural traditions.

Sophist Specific kind of teacher in both Ancient Greece and in the Roman Empire Etymology[edit] The word σοφός gives rise to the verb σοφίζω (sophizo), which means "to instruct" or "make learned", and the passive voice of which means "to become or be wise", or "to be clever or skilled". From the verb is derived the noun σοφιστής (sophistes), which originally meant "a master of one's craft" and later "a prudent man" or "wise man".[1] The word for "sophist" in various languages comes from sophistes.