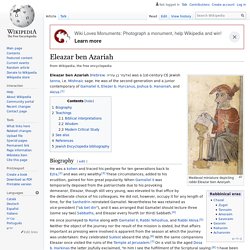 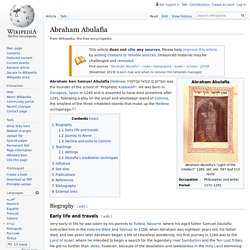 He was born in Zaragoza, Spain in 1240 and is assumed to have died sometime after 1291, following a stay on the small and windswept island of Comino, the smallest of the three inhabited islands that make up the Maltese archipelago.[1] Biography[edit] Early life and travels[edit] Although he always held Maimonides in the highest esteem, and often made use of sentences from his writings, he was as little satisfied with his philosophy as with any other branch of knowledge which he acquired. He was highly articulate, able and eager to teach others. Journey to Rome[edit] He went to Rome in 1280 in order to convert Pope Nicholas III to Judaism on the day before Rosh Hashanah.

Decline and exile to Comino[edit] He remained active in Messina for a decade (1281–91), presenting himself as a "prophet" and "messiah". Bloodstone Meaning and Uses. The Crystal Vaults Comprehensive Illustrated Guide to Crystals Your On-Line Guide to The Healing Energies, Metaphysical Properties, Legendary Uses and Meaning. 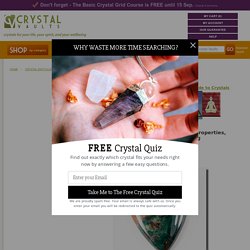 Heliotrope (mineral) Heliotrope is sometimes used in carved signet rings and is the traditional birthstone for Aries. 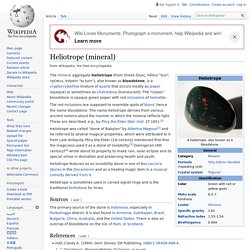 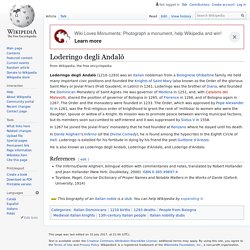 He held many important civic positions and founded the Knights of Saint Mary (also known as the Order of the glorious Saint Mary or Jovial Friars (Frati Gaudenti, in Latin)) in 1261. Order of the Blessed Virgin Mary. [The members of the order] are to be allowed to bear arms for the defence of the catholic faith and ecclesiastical freedom, when specifically required to do so by the Roman church. 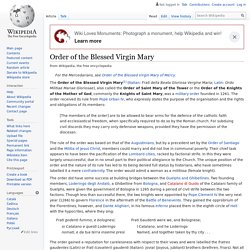 For subduing civil discords they may carry only defensive weapons, provided they have the permission of the diocesan. The rule of the order was based on that of the Augustinians, but by a precedent set by the Order of Santiago and the Militia of Jesus Christ, members could marry and did not live in communal poverty. Their chief task appears to have been the pacification of the Lombard cities, racked by factional strife.

In this they were largely unsuccessful, due in no small part to their political allegiance to the Church. The unique position of the order and the nature of its rule has led to its being denied full status by historians, who have sometimes labelled it a mere confraternity. Divine Comedy – Digital Dante. Divine Comedy – Digital Dante. Michael Scot. Michael Scott (Latin: Michael Scotus; 1175 – c. 1232) was a mathematician and scholar in the Middle Ages. 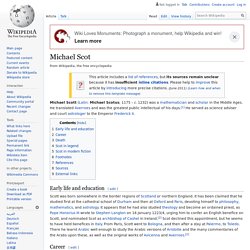 He translated Averroes and was the greatest public intellectual of his days.[1] He served as science adviser and court astrologer to the Emperor Frederick II. Early life and education[edit] Scott was born somewhere in the border regions of Scotland or northern England. It has been claimed that he studied first at the cathedral school of Durham and then at Oxford and Paris, devoting himself to philosophy, mathematics, and astrology. It appears that he had also studied theology and become an ordained priest, as Pope Honorius III wrote to Stephen Langton on 16 January 1223/4, urging him to confer an English benefice on Scott, and nominated Scot as archbishop of Cashel in Ireland.[2] Scot declined this appointment, but he seems to have held benefices in Italy. Guido Bonatti. Guido Bonatti, anonymous 18th-century engraving. 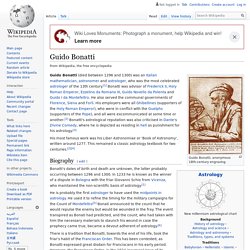 Guido Bonatti (died between 1296 and 1300) was an Italian mathematician, astronomer and astrologer, who was the most celebrated astrologer of the 13th century.[1] Bonatti was advisor of Frederick II, Holy Roman Emperor, Ezzelino da Romano III, Guido Novello da Polenta and Guido I da Montefeltro. He also served the communal governments of Florence, Siena and Forlì. His employers were all Ghibellines (supporters of the Holy Roman Emperor), who were in conflict with the Guelphs (supporters of the Pope), and all were excommunicated at some time or another.[2] Bonatti's astrological reputation was also criticised in Dante's Divine Comedy, where he is depicted as residing in hell as punishment for his astrology.[3] His most famous work was his Liber Astronomiae or 'Book of Astronomy', written around 1277.

This remained a classic astrology textbook for two centuries.[2][4] Danteum. The Danteum is an unbuilt monument proposed by a scholar of Dante, approved by the Benito Mussolini's Fascist government, designed by the modernist architect Giuseppe Terragni. 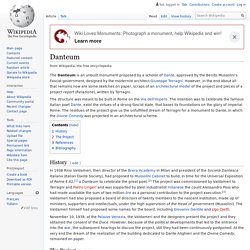 However, in the end about all that remains now are some sketches on paper, scraps of an architectural model of the project and pieces of a project report (Relazione), written by Terragni. The structure was meant to be built in Rome on the Via dell'Impero. Inferno (Brown novel) Novel by Dan Brown Harvard professor Robert Langdon wakes up in a hospital in Florence, Italy with a head wound and no memory of the last few days. 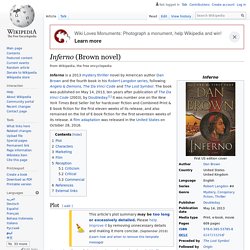 Dr. Metonymy. Metonymy (/mɛˈtɒnəmi/)[1] is a figure of speech in which a thing or concept is referred to by the name of something closely associated with that thing or concept.[2] Etymology[edit] The words metonymy and metonym come from the Greek μετωνυμία, metōnymía, "a change of name", from μετά, metá, "after, beyond", and -ωνυμία, -ōnymía, a suffix that names figures of speech, from ὄνυμα, ónyma or ὄνομα, ónoma, "name".[3] Terentianus. His references to Septimius Serenus and Alphius Avitus, who belonged to the school of "new poets" (poetae neoterici or novelli) of the reign of Hadrian and later, seem to show that he was a near contemporary of those writers.

He was the author of a treatise (incomplete) in four books (written chiefly in hexameters), on letters, syllables, feet and metres, of which considerable use was made by later writers on similar subjects. The most important part of it is that which deals with metres, based on the work of Caesius Bassus, the friend of Persius. By some authorities Terentianus has been identified with the prefect of Syene mentioned in Martial (i. 86), which would make his date about a century earlier; others, again, who placed Petronius at the end of the 3rd century (a date no longer held), assigned Terentianus to the same period, from his frequent references to that author. See also[edit] Habent sua fata libelli. Thais.

JULIAN OF NORWICH, HER SHOWING OF LOVE AND ITS CONTEXTS ©1997-2017 JULIA BOLTON HOLLOWAY || JULIAN OF NORWICH || SHOWING OF LOVE || HER TEXTS || HER SELF || ABOUT HER TEXTS || BEFORE JULIAN || HER CONTEMPORARIES || AFTER JULIAN || JULIAN IN OUR TIME || ST BIRGITTA OF SWEDEN || BIBLE AND WOMEN || EQUALLY IN GOD'S IMAGE || MIRROR OF SAINTS || BENEDICTINISM || THE CLOISTER || ITS SCRIPTORIUM || AMHERST MANUSCRIPT || PRAYER || CATALOGUE AND PORTFOLIO (HANDCRAFTS, BOOKS ) || BOOK REVIEWS || BIBLIOGRAPHY || Terence through Time Website, 1999/2017 E-Book. iterary works, ancient or modern, may be evaluated for what may make them timeless, as a tale which will be read, understood and relished not only today, but for centuries to come. Such qualities can be as easily recognized by a man as by a woman, by a white man as by a yellow, by a nobleman as by a pauper, regardless of the identity of the author who first created them.

Eunuchus. Drawing by Albrecht Dürer of a scene from Eunuchus. Eunuchus (The Eunuch) is a comedy written by the 2nd century BCE Roman playwright Terence featuring a complex plot of familial misunderstanding.[1] It was Terence's most successful play during his lifetime. Suetonius notes how the play was staged twice in a single day and won Terence 8,000 sesterces.[2]. The play is a loose translation of one written by Menander in Greek.[3] Characters[edit] Demea - Athenian nobleman and father of Phaedria and Chaerea.

Prologue[edit] The prologue is an apology for the work of Terence, who was coming under attack at the time for his writing. Internet History Sourcebooks. Medieval Sourcebook: Alain of Lille [Alanus de lnsulis]: The Complaint of Nature. [ d. 1202.] Alain of Lille [Alanus de lnsulis], d. 1202., The complaint of nature, Yale studies in English, v. 36 (1908), Translation of De planctu natura. by Douglas M. Moffat. Pagination preserved in etext form. Alain de Lille. Alain de Lille (Latin: Alanus ab Insulis; c. 1128 – 1202/03) was a French[1] theologian and poet. Inferno 16 – Digital Dante. The Meaning of Our Corded Belts - MFVA - Franciscan Missionaries of the Eternal Word.