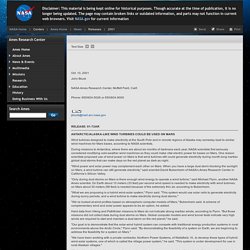 Phone: 650/604-5026 or 650/604-9000 jbluck@mail.arc.nasa.gov Wind turbines designed to make electricity at the South Pole and in remote regions of Alaska may someday lead to similar wind machines for Mars bases, according to NASA scientists. Breakthrough in energy harvesting could power life on Mars. Martian colonists could use an innovative new technique to harvest energy from carbon dioxide thanks to research pioneered at Northumbria University, Newcastle. 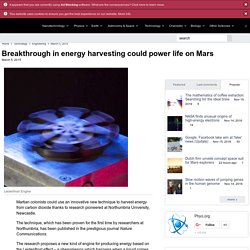 The technique, which has been proven for the first time by researchers at Northumbria, has been published in the prestigious journal Nature Communications. The research proposes a new kind of engine for producing energy based on the Leidenfrost effect – a phenomenon which happens when a liquid comes into near contact with a surface much hotter than its boiling point. This effect is commonly seen in the way water appears to skitter across the surface of a hot pan, but it also applies to solid carbon dioxide, commonly known as dry ice.

Blocks of dry ice are able to levitate above hot surfaces protected by a barrier of evaporated gas vapour. Northumbria's research proposes using the vapour created by this effect to power an engine. Explore further: Doctoral student explores formation of martian gullies More information: Gary G. Energy On Mars: What Are The Challenges? It’s starting to look like people may go to Mars in our lifetimes. 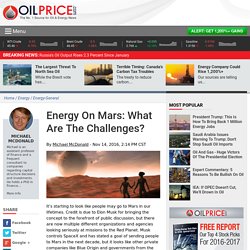 Credit is due to Elon Musk for bringing the concept to the forefront of public discussion, but there are now multiple different organizations and agencies looking seriously at missions to the Red Planet. Musk controls SpaceX and has stated a goal of sending people to Mars in the next decade, but it looks like other private companies like Blue Origin and governments from the U.S. to China are all interested in the concept as well.

Radioisotope thermoelectric generator - Wikipedia. A radioisotope thermoelectric generator (RTG, RITEG) is an electrical generator that uses an array of thermocouples to convert the heat released by the decay of a suitable radioactive material into electricity by the Seebeck effect. This generator has no moving parts. RTGs have been used as power sources in satellites, space probes, and unmanned remote facilities such as a series of lighthouses built by the former Soviet Union inside the Arctic Circle. RTGs are usually the most desirable power source for unmaintained situations that need a few hundred watts (or less) of power for durations too long for fuel cells, batteries, or generators to provide economically, and in places where solar cells are not practical.

Safe use of RTGs requires containment of the radioisotopes long after the productive life of the unit. Notably, RTGs tend to be a prohibitively expensive for most things they might otherwise find applications for. The first nuclear power plants for settlements on the Moon & Mars - American Chemical Society. Imagineering on Mars - Making Heat on Mars(Imagineering E-Zine) How Energy From Dry Ice Could Power Human Colonies On Mars. A mission to Mars has captured the public’s imagination and the possibility of making that second small step has never seemed so close. 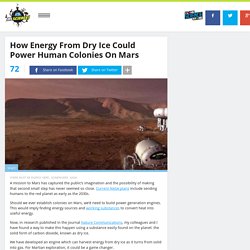 Current NASA plans include sending humans to the red planet as early as the 2030s. Should we ever establish colonies on Mars, we’d need to build power generation engines. This would imply finding energy sources and working substances to convert heat into useful energy. Now, in research published in the journal Nature Communications, my colleagues and I have found a way to make this happen using a substance easily found on the planet: the solid form of carbon dioxide, known as dry ice. We have developed an engine which can harvest energy from dry ice as it turns from solid into gas. Long Island dry ice tea? To understand why, let’s go back to Earth for a moment. This whole situation changes dramatically on Mars; although water is still available on the surface of the red planet, it is locked in solid form. 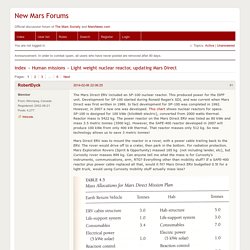 Let's start by looking at equipment installed on ISS. This is sized for 3 crew; the other 3 are supported by the Russian side. This is what I provided for the Mars Homestead Project - Phase One: Hillside Settlement. But that was sized for 12 crew, this is adjusted for 4 crew. Waste Collector Subsystem: (space toilet)This is designed for zero-G, we may use a simpler toilet in the gravity of Mars, but it is a starting point. Despite Dust Storms, Solar Power is Best for Mars Colonies - Universe Today. 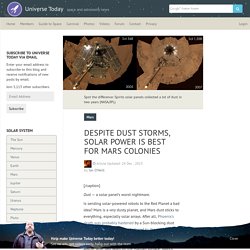 Is sending solar-powered robots to the Red Planet a bad idea? Mars is a very dusty planet, and Mars dust sticks to everything, especially solar arrays. After all, Phoenix’s death was probably hastened by a Sun-blocking dust storm, and rover Spirit was battered by the combined solar panel-coated dust layer plus dust storm, nearly draining its batteries (as can be seen in the comparison above, after two years on the Martian surface, Spirit’s dusty layer was already an acute problem). However, a NASA-sponsored MIT think-tank has weighed up the future energy needs of a manned settlement on Mars and arrived at an interesting conclusion… It sounds like the “nuclear space debate” continues. The Utility of Geothermal Energy on Mars. Could Mars colonies use geothermal energy as a source of power? - Quora. 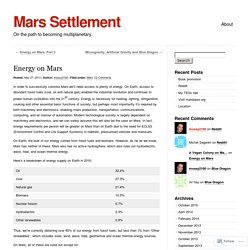 On Earth, access to abundant fossil fuels (coal, oil and natural gas) enabled the industrial revolution and continues to power human civilisation into the 21st century. Energy is necessary for heating, lighting, refrigeration, cooking and other essential basic functions of society, but perhaps most importantly it’s required by both machinery and electronics, enabling mass production, transportation, communications, computing, and all manner of automation. Modern technological society is largely dependent on machinery and electronics, and we can safely assume this will also be the case on Mars. In fact, energy requirements per person will be greater on Mars than on Earth due to the need for ECLSS (Environment Control and Life Support Systems) in habitats, pressurised vehicles and marssuits. On Earth, the bulk of our energy comes from fossil fuels and biomass. Energy Sources - Welcome to Mars. The Sahara desert is pretty big, but can you imagine it could be as big as a whole planet, a barren, uninhabited desert where sandstorms and tornados rampage! 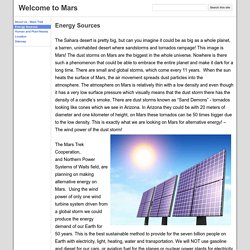 This image is Mars! The dust storms on Mars are the biggest in the whole universe. Nowhere is there such a phenomenon that could be able to embrace the entire planet and make it dark for a long time. There are small and global storms, which come every 11 years. The Mars Colony. The Mars Colony Over the course of the lab, we have done many experiments that can relate to building a colony on mars. 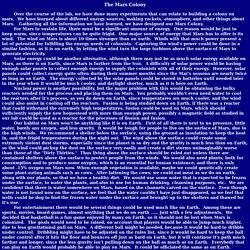 We have learned about different energy sources, making rockets, atmosphere, and other things about Mars. Gathering all the information we have learned, we have designed our Mars Colony. For Mars to sustain life, there must be a significant amount of energy. One reason would be just to keep warm, since temperatures can be quite frigid. Mars - What power source options provide reliable and sustainable power generation for a Martian Colony - Space Exploration Stack Exchange. Many life support and mission design questions have answers depending on scale: how large is the colony? 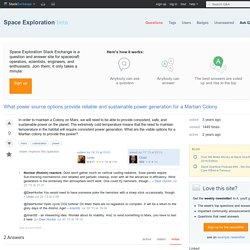 So far viable solutions discussed in Mars mission papers revolve around two major sources of energy: solar (photoelectric panels ) andnuclear (meaning conventional fission reactors on Uranium-235, most likely highly enriched) Until now, we have faced several challenges as far as photovoltaics are concerned: dust accumulationthe need to rotate the panels to track the Sun and corresponding unreliability of any mechanisms with bearings in Martian environment (even with human maintenance)PV decay with timeseasonal variations of PV outputthe need to store energy for consumption at night and the refreshing idea of having to add extra mass to the deliverable goods and to watch out for any problems (including thermal ones) with the batteries (although flywheels will become more efficient as the colony scales) However, there are two other possible solutions for sufficiently large colonies:

Want to live and use energy on Mars? Why not? The problem of energy accessibility and production on Mars is one of the three main challenges for the upcoming colonisation of the red planet. The energetic potential on its turn is mainly dependent on the astrophysical characteristics of the planet. A short insight into the Mars environment is thus the compulsory introduction to the problem of energy onMars.