Designing Stories: Chris Ware as the Intersection of Comics and Graphic Design by undefined. Nick Gazin's Comic Book Love-in #59 - VICE. Oh My Goddess: Anthropological Thoughts On the Representation of Marvel’s Storm and the Legacy of Black Women in Comics. The Objectification of Women in Graphic Novels. A handsome intelligence officer of the United States Army, Colonel Steve Trevor, crashes his plane on “Paradise Island” (an island full of Amazon women, what else would it be called, right?). 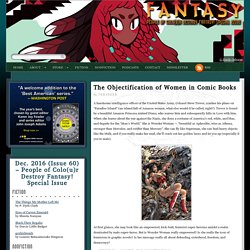 Trevor is found by a beautiful Amazon Princess named Diana, who nurses him and subsequently falls in Love with him. When she learns about the war against the Nazis, she dons a costume of America’s red, white, and blue, and departs for the “Man’s World.” She is Wonder Woman — “beautiful as Aphrodite, wise as Athena, stronger than Hercules, and swifter than Mercury”. She can fly like Superman, she can hurl heavy objects like the Hulk, and if you really make her mad, she’ll crack out her golden lasso and tie you up (especially if you’re male). At first glance, she may look like an empowered, kick-butt, feminist super-heroine amidst a realm dominated by male super-heros. 1.

The Rise of the American Comics Artist: Creators and Contexts - Google Books. A Dose of Design Inspiration from Comic Strips. Introduction. “These films had a sensibility that can be called ‘European’, instead of having special effects they bring more intellectual truth.” – Renato Polselli, Director Taking its cue from Gary Needham’s Kino Eye article Playing with genre – an introduction to the Italian giallo (2002) this study is an effort in opening up rather than closing down the subject of the giallo. 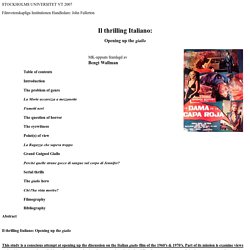 As such it aims to explore rather than define, suggesting avenues rather than blind alleys. As I have seen it, part of this effort is examining the views and writings available on the giallo. Therefore much of the study is spent on analysing and comparing different ideas and theories. I have made a conscious attempt to bring ideas from various fields together and as it were, pitch them against each other not in antagonism but in an attempt to find a common ground. In short the questions that I pose in are concerned with generic definition of the giallo and its interdisciplinary influences. Studying Comics and Graphic Novels - Karin Kukkonen - Google Books.

Pornographic space-time and the potential of fantasy in comics and fan art. 1.

Art - icons - comics. SUPER SEXIST : A Character Analysis of Marvel's Women - The Bull & Bear. By KC Moore, Staff Writer HOWARD STARK: I always thought you should be in pictures, Peg. 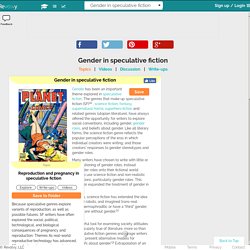 The genres that make up speculative fiction (SF)[a] , science fiction, fantasy, supernatural horror, superhero fiction and related genres (utopian literature), have always offered the opportunity for writers to explore social conventions, including gender, gender roles, and beliefs about gender. Like all literary forms, the science fiction genre reflects the popular perceptions of the eras in which individual creators were writing; and those creators' responses to gender stereotypes and gender roles.

Many writers have chosen to write with little or no questioning of gender roles, instead effectively reflecting their own cultural gender roles onto their fictional world. However, many other writers have chosen to use science fiction and non-realistic formats in order to explore cultural conventions, particularly gender roles. Critical analysis. Sex, War, And Power: Illustrations That Depict How Humanity Is Rotten To The Core. Twitter0 0facebook4282 4282pinterest33 33google plus0Share0stumbleupon0Share0meneame1Share1tumblr0Share0 If we let ourselves be swept away by conspiracy theories for a moment, we would all claim without a shadow of a doubt that the world is on the brink of a Third World War. 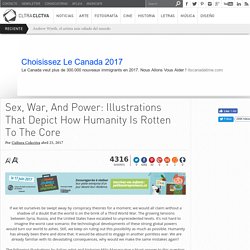 The growing tensions between Syria, Russia, and the United States have escalated to unprecedented levels. It’s not hard to imagine the worst case scenario: the technological developments of these strong global powers would turn our world to ashes. Still, we keep on ruling out this possibility as much as possible. Humanity has already been there and done that. The following illustrations by Italian artist and historian Milo Manara give a blunt answer to this question.

For Milo Manara, humanity was born from violence, where eroticism and culture merge seamlessly. Milo Manara’s unique style is unmistakable, for he is a great exponent of the Italian comic genre and is known for his brand of eroticism. Race Gender & The Media Paper: Women Portrayal in Comics. There have been controversies surrounding women in the comic book world since the very beginning of the industry, their gender roles, stereotypes, and unrealistic body type depictions. 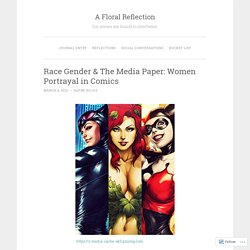 The women that have starred as leaders, supporting characters, have both succeeded and failed throughout each comic book age in justly women representation. They have gone from damsels in distress, to sexualized objects, being drawn by men and created for the male audience. Their advancements towards a positive progression have been slow, and have only recently positively become identifiable and pleasing to the industries rapid growing female fans. The Golden Age of comic books was between the 1930’s until the 1940’s, when they were first introduced, and women in comic books then were commonly portrayed solely as the subordinate character in the background or fitting into generic stereotypes.

Wonder Woman was primarily a success, but also underwent scrutiny and controversies. The Objectification of Women in Comic Books. No Girls Allowed!: Crumb and the Comix Counterculture. Although ‘60s counterculture gave the women’s movement a chance to blossom, women were fighting an uphill battle; they had to go up against not just The Man, but the men: their own supposedly sympathetic compatriots. 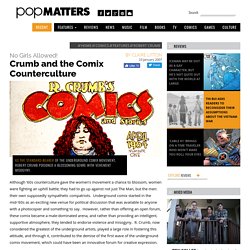 Underground comix started in the mid-‘60s as an exciting new venue for political discussion that was available to anyone with a photocopier and something to say. The Problem With Representations Of Women In Comics. Female Superhero Representation in Comics. Black Widow. 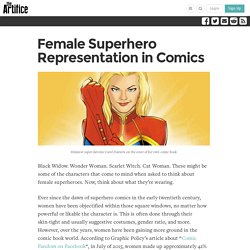 Wonder Woman. Scarlet Witch. Cat Woman. These might be some of the characters that come to mind when asked to think about female superheroes. Now, think about what they’re wearing. Women in Comics. The changing role of women in comic books. It’s a time of change for comic books. 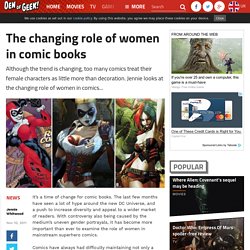 Graphic Women: Life Narrative and Contemporary Comics. New York: Columbia UP, 2010. Print. Women have been making comics for a very long time. It should go without saying that, today, women no longer need be cloistered virgins in order to produce imagetexts. The Supergirls: Fashion, Feminism, Fantasy, and the History of Comic Book Heroines by Mike Madrid. (Exterminating Angel Press)US: Sep 2009 On a trip to your local comic book store you can see any number of buxom women gracing the covers of superhero comics.

Race and Gender in Comic Books. The changing role of women in comic books.