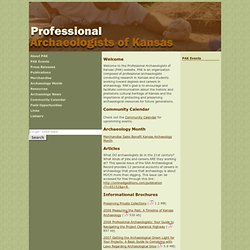 PAK is an organization composed of professional archaeologists conducting research in Kansas and students working toward degrees and careers in archaeology. PAK's goal is to encourage and facilitate communication about the historic and prehistoric cultural heritage of Kansas and the importance of protecting and preserving archaeological resources for future generations. Community Calendar Check out the Community Calendar for upcomming events. Archaeology Month Merchandise Sales Benefit Kansas Archaeology Month Articles What DO archaeologists do in the 21st century? Informational Brochures Preserving Private Collections ( 2009 Measuring the Past: A Timeline of Kansas Archaeology ( 530 kb) 2008 Professional Archaeologists: Your Guide to Navigating the Project Clearance Highway ( 897 kb) 2007 Getting the Archaeological Green Light for Your Projects: A Basic Guide to Complying with Laws Regarding Archaeological Sites ( Donations. 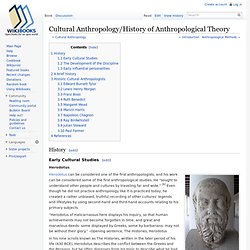 He “sought to understand other people and cultures by traveling far and wide.” [6] Even though he did not practice anthropology like it is practiced today, he created a rather unbiased, truthful recording of other cultures’ legends and lifestyles by using second-hand and third-hand accounts relating to his primary subjects. “Herodotus of Halicarnassus here displays his inquiry, so that human achievements may not become forgotten in time, and great and marvelous deeds- some displayed by Greeks, some by barbarians- may not be without their glory.” Friar John of Pian de Caprine The Journey of Friar John of Pian de Caprine to the Court of Kuyuk Khan, 1245-1247, is another very early cultural anthropological study. Anthropological Theory. Anthropological Theory The following materials are key presentation points developed by the instructor during class lectures. 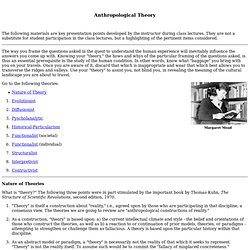 They are not a substitute for student participation in the class lectures, but a highlighting of the pertinent items considered. The way you frame the questions asked in the quest to understand the human experience will inevitably influence the answers you come up with. Knowing your "theory," the hows and whys of the particular framing of the questions asked, is thus an essential prerequisite in the study of the human condition. In other words, know what "baggage" you bring with you on your travels. Theories in Anthropology. Cultural Anthropology: Theories Theories are like "big-picture" roadmaps, that are meant to orient us in the midst of a lot of facts, ideas, beliefs, opinions etc., to make general sense out of them. 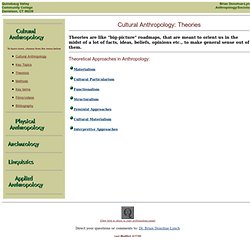 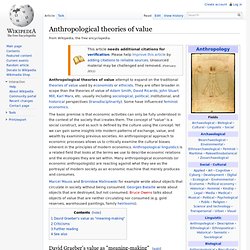 They are often broader in scope than the theories of value of Adam Smith, David Ricardo, John Stuart Mill, Karl Marx, etc. usually including sociological, political, institutional, and historical perspectives (transdisciplinarity). Some have influenced feminist economics. The basic premise is that economic activities can only be fully understood in the context of the society that creates them. The concept of "value" is a social construct, and as such is defined by the culture using the concept.

Yet we can gain some insights into modern patterns of exchange, value, and wealth by examining previous societies. Marcel Mauss and Bronisław Malinowski for example wrote about objects that circulate in society without being consumed. David Graeber's value as "meaning-making"[edit] David Graeber attempts to synthesize the insights of Karl Marx and Marcel Mauss. Criticisms[edit] - Anthropological Theories - Department of Anthropology - The University of Alabama. Society for Medical Anthropology. 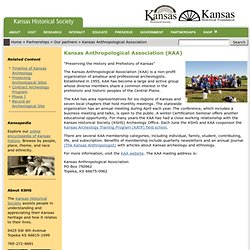 Established in 1955, KAA has become a large and active group whose diverse members share a common interest in the prehistoric and historic peoples of the Central Plains. The KAA has area representatives for six regions of Kansas and seven local chapters that hold monthly meetings. The statewide organization has an annual meeting during April each year. The conference, which includes a business meeting and talks, is open to the public. There are several KAA membership categories, including individual, family, student, contributing, life, and subscription. For more information, visit the KAA website. Supporting & disseminating innovative research & teaching on human biological variation, worldwide. Foundation For Endangered Languages - Home. Endangered Language Fund. ArchNet - WWW Virtual Library - Archaeology. Archaeological Institute of America - Archaeology - Site Preservation.