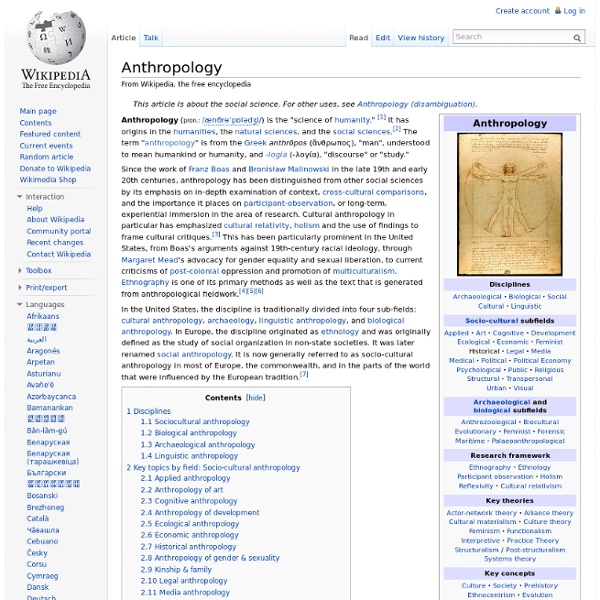 Anthropology /ænθrɵˈpɒlədʒi/ is the study of humankind, past and present,[1][2] that draws and builds upon knowledge from social and biological sciences, as well as the humanities and the natural sciences.[3][4] Since the work of Franz Boas and Bronisław Malinowski in the late 19th and early 20th centuries, anthropology in Great Britain and the US has been distinguished from ethnology[5] and from other social sciences by its emphasis on cross-cultural comparisons, long-term in-depth examination of context, and the importance it places on participant-observation or experiential immersion in the area of research. In those European countries that did not have overseas colonies, where ethnology (a term coined and defined by Adam F. Origin of the term[edit] The term anthropology originates from the Greek anthrōpos (ἄνθρωπος), "human being" (understood to mean humankind or humanity), and -λογία -logia, "study." Fields[edit] According to Clifford Geertz, Sociocultural[edit] Biological[edit]

Education School children sitting in the shade of an orchard in Bamozai, near Gardez, Paktya Province, Afghanistan A right to education has been recognized by some governments. At the global level, Article 13 of the United Nations' 1966 International Covenant on Economic, Social and Cultural Rights recognizes the right of everyone to an education.[2] Although education is compulsory in most places up to a certain age, attendance at school often isn't, and a minority of parents choose home-schooling, e-learning or similar for their children. Etymology[edit] Etymologically, the word "education" is derived from the Latin ēducātiō ("A breeding, a bringing up, a rearing") from ēdūcō ("I educate, I train") which is related to the homonym ēdūcō ("I lead forth, I take out; I raise up, I erect") from ē- ("from, out of") and dūcō ("I lead, I conduct").[3] Education can take place in formal or informal educational settings.

Archaeology Archaeology studies human prehistory and history from the development of the first stone tools in eastern Africa 4 million years ago up until recent decades.[4] (Archaeology does not include the discipline of paleontology.) It is of most importance for learning about prehistoric societies, when there are no written records for historians to study, making up over 99% of total human history, from the Paleolithic until the advent of literacy in any given society.[2] Archaeology has various goals, which range from studying human evolution to cultural evolution and understanding culture history.[5] Archaeology developed out of antiquarianism in Europe during the 19th century, and has since become a discipline practiced across the world. History[edit] Antiquarians[edit]

Intersectionality - Wikipedia This framework can be used to understand how systemic injustice and social inequality occur on a multidimensional basis.[3] Intersectionality holds that the classical conceptualizations of oppression within society—such as racism, sexism, classism, ableism, homophobia, transphobia, xenophobia and belief-based bigotry—do not act independently of each other. Instead, these forms of oppression interrelate, creating a system of oppression that reflects the "intersection" of multiple forms of discrimination.[4] Intersectional identities usually aren’t addressed or mapped out in normal social discourses and often come with their own set of oppression, domination, and discrimination. Because laws and policies usually only address one form of marginalized identity but not the intersection of multiple oppressed identities, intersectional identities often go overlooked. Historical background[edit]

Four Steps to Creating Principles and Building A High Performance Workplace Have you read the first part of this article? You may like to look at the the overview of the importance of developing guiding principles before jumping into these four steps to creating principles. Step One: Articulate the Values Articulating the values that you want to drive the organization, is an important part of the visioning process for any organization. Most organizations identify 6-8 core values they want their business to operate under, that will drive the outcomes achieved by the business.

Economics For a topical guide to this subject, see Outline of economics. Economics is the social science that studies the behavior of individuals, households, and organizations (called economic actors, players, or agents), when they manage or use scarce resources, which have alternative uses, to achieve desired ends. Agents are assumed to act rationally, have multiple desirable ends in sight, limited resources to obtain these ends, a set of stable preferences, a definite overall guiding objective, and the capability of making a choice. There exists an economic problem, subject to study by economic science, when a decision (choice) has to be made by one or more resource-controlling players to attain the best possible outcome under bounded rational conditions.

Zoology Zoology (/zoʊˈɒlədʒi/, zoh AHL uh jee) or animal biology, is the branch of biology that relates to the animal kingdom, including the structure, embryology, evolution, classification, habits, and distribution of all animals, both living and extinct. The term is derived from Ancient Greek ζῷον, zōon, i.e. "animal" and λόγος, logos, i.e. "knowledge, study".[1] History[edit] Ancient history to Darwin[edit]

Public administration Public administration is both an academic discipline and a field of practice; the latter is depicted in this picture of US federal public servants at a meeting. Public administration refers to two meanings: first, it is concerned with the implementation of government policy; second, it is an academic discipline that studies this implementation and prepares civil servants for working in the public service.[1] As a "field of inquiry with a diverse scope" its "fundamental goal... is to advance management and policies so that government can function."[2] Some of the various definitions which have been offered for the term are: "the management of public programs";[3] the "translation of politics into the reality that citizens see every day";[4] and "the study of government decision making, the analysis of the policies themselves, the various inputs that have produced them, and the inputs necessary to produce alternative policies.