The Philosophical Implications of the Urge to Urinate. If one thing’s for sure, it’s that I decided what breakfast cereal to eat this morning. 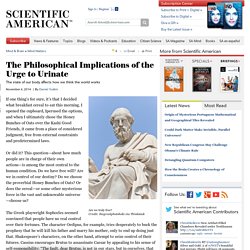 I opened the cupboard, Iperused the options, and when I ultimately chose the Honey Bunches of Oats over the Kashi Good Friends, it came from a place of considered judgment, free from external constraints and predetermined laws. Or did it? This question—about how much people are in charge of their own actions—is among the most central to the human condition. Do we have free will? Are we in control of our destiny? The Greek playwright Sophocles seemed convinced that people have no real control over their fortunes. Fortunately, though, for social scientists (and for readers of this column), the task of the experimental psychologist isn’t to settle once and for all whether we have free will, but rather to see whether people think they do.

The study of lay theory yields interesting insights about the factors that hold sway over our seemingly most deeply held beliefs. Drugs and the Meaning of Life. (Photo by JB Banks) (Note 6/4/2014: I have revised this 2011 essay and added an audio version. 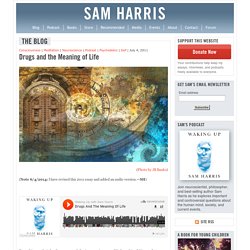 —SH) Everything we do is for the purpose of altering consciousness. We form friendships so that we can feel certain emotions, like love, and avoid others, like loneliness. We eat specific foods to enjoy their fleeting presence on our tongues. Drugs are another means toward this end. Dennis McKenna: DMT strips away the brain's filter on reality. DMT: THE SPIRIT MOLECULE [Official Trailer] Pineal gland. The pineal gland, also known as the pineal body, conarium or epiphysis cerebri, is a small endocrine gland in the vertebrate brain. 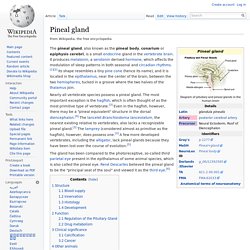 It produces melatonin, a serotonin derived hormone, which affects the modulation of sleep patterns in both seasonal and circadian rhythms.[1][2] Its shape resembles a tiny pine cone (hence its name), and it is located in the epithalamus, near the center of the brain, between the two hemispheres, tucked in a groove where the two halves of the thalamus join. Nearly all vertebrate species possess a pineal gland. The gland has been compared to the photoreceptive, so-called third parietal eye present in the epithalamus of some animal species, which is also called the pineal eye. René Descartes believed the pineal gland to be the "principal seat of the soul" and viewed it as the third eye.[6] Structure[edit] Blood supply[edit] DMT & The Mysteries of The Pineal Gland. Blisshrooms. Mescaline. Mescaline or 3,4,5-trimethoxyphenethylamine is a naturally occurring psychedelic alkaloid of the phenethylamine class, known for its hallucinogenic effects similar to those of LSD and psilocybin. 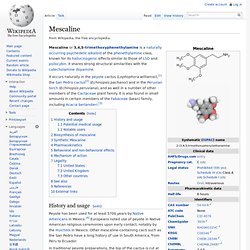 It shares strong structural similarities with the catecholamine dopamine. It occurs naturally in the peyote cactus (Lophophora williamsii),[1] the San Pedro cactus[2] (Echinopsis pachanoi) and in the Peruvian torch (Echinopsis peruviana), and as well in a number of other members of the Cactaceae plant family. It is also found in small amounts in certain members of the Fabaceae (bean) family, including Acacia berlandieri.[3] Naturally derived mescaline powder extract.

History and usage[edit] Peyote has been used for at least 5700 years by Native Americans in Mexico.[4] Europeans noted use of peyote in Native American religious ceremonies upon early contact, notably by the Huichols in Mexico. Potential medical usage[edit] Notable users[edit] Biosynthesis of mescaline[edit] Hallucinogen. Lysergic acid diethylamide. Lysergic acid diethylamide, abbreviated LSD or LSD-25, also known as lysergide (INN) and colloquially as acid, is a semisynthetic psychedelic drug of the ergoline family, well known for its psychological effects which can include altered thinking processes, closed- and open-eye visuals, synesthesia, an altered sense of time and spiritual experiences, as well as for its key role in 1960s counterculture. 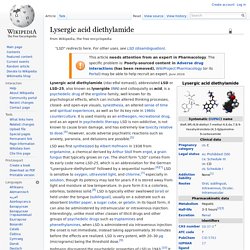 It is used mainly as an entheogen, recreational drug, and as an agent in psychedelic therapy. LSD is non-addictive, is not known to cause brain damage, and has extremely low toxicity relative to dose.[3] However, acute adverse psychiatric reactions such as anxiety, paranoia, and delusions are possible.[4] LSD was first synthesized by Albert Hofmann in 1938 from ergotamine, a chemical derived by Arthur Stoll from ergot, a grain fungus that typically grows on rye. Effects Physical. Ayahuasca. Psilocybin. Psychoactive drug. An assortment of psychoactive drugs—street drugs and medications: Psychoactive substances often bring about subjective (although these may be objectively observed) changes in consciousness and mood that the user may find rewarding and pleasant (e.g. euphoria or a sense of relaxation) or advantageous (e.g. increased alertness) and are thus reinforcing. 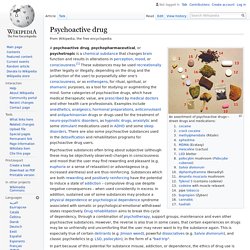 Substances which are both rewarding and positively reinforcing have the potential to induce a state of addiction – compulsive drug use despite negative consequences – when used consistently in excess. In addition, sustained use of some substances may produce a physical dependence or psychological dependence syndrome associated with somatic or psychological-emotional withdrawal states respectively.

Drug rehabilitation aims to break this cycle of dependency, through a combination of psychotherapy, support groups, maintenance and even other psychoactive substances. History[edit] Alcohol is a widely used and abused psychoactive drug. Concord Prison Experiment. The Concord Prison Experiment was designed to evaluate whether the experiences produced by the psychoactive drug psilocybin, derived from psilocybin mushrooms, combined with psychotherapy, could inspire prisoners to leave their antisocial lifestyles behind once they were released. 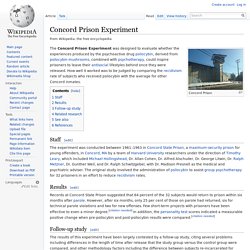 How well it worked was to be judged by comparing the recidivism rate of subjects who received psilocybin with the average for other Concord inmates. Staff[edit] The experiment was conducted between 1961–1963 in Concord State Prison, a maximum-security prison for young offenders, in Concord, MA by a team of Harvard University researchers under the direction of Timothy Leary, which included Michael Hollingshead, Dr. Allan Cohen, Dr. Alfred Alschuder, Dr. Marsh Chapel Experiment. The rose window above the altar at Boston University's Marsh Chapel The Marsh Chapel Experiment, also called the "Good Friday Experiment," was a 1962 experiment conducted on Good Friday at Boston University's Marsh Chapel. 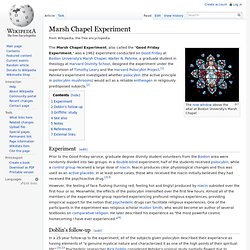 Walter N. Brain. This article compares the properties of brains across the entire range of animal species, with the greatest attention to vertebrates. 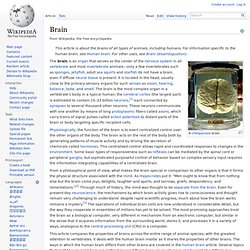 It deals with the human brain insofar as it shares the properties of other brains. The ways in which the human brain differs from other brains are covered in the human brain article. Several topics that might be covered here are instead covered there because much more can be said about them in a human context. Terence Mckenna - Trust Yourself. Neuropsychopharmacology - Serotonin and Hallucinogens. Rare footage of 1950s housewife in LSD experiment. Mckenna discusses if reality is real. The Effects of LSD on the Brain (Hallucinations) Updated May 20, 2014. 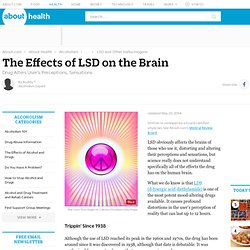 Written or reviewed by a board-certified physician. LSD Effects - HowStuffWorks. What Happens To A Brain On MDMA. Terence McKenna. Psychonautics. Psychonautics (from the Greek ψυχή (psychē "soul/spirit/mind") and ναύτης (naútēs "sailor/navigator")—a sailor of the mind/soul)[1] refers both to a methodology for describing and explaining the subjective effects of altered states of consciousness, including those induced by meditation or mind-altering substances, and to a research paradigm in which the researcher voluntarily immerses himself or herself into an altered mental state in order to explore the accompanying experiences.[2] The term has been applied diversely, to cover all activities by which altered states are induced and utilized for spiritual purposes or the exploration of the human condition, including shamanism, lamas of the Tibetan Buddhist tradition,[3] sensory deprivation,[1] and archaic/modern drug users who use entheogenic substances in order to gain deeper insights and spiritual experiences.[4] A person who uses altered states for such exploration is known as a psychonaut.

Etymology and categorization[edit] Peter J. Tabernanthe iboga. Tabernanthe iboga or simply iboga is a perennial rainforest shrub and psychedelic, native to western Central Africa. N,N-Dimethyltryptamine. History[edit] Another historical milestone is the discovery of DMT in plants frequently used by Amazonian natives as additive to the vine Banisteriopsis caapi to make ayahuasca decoctions. Biosynthesis[edit] Biosynthetic pathway for N,N-dimethyltryptamine This transmethylation mechanism has been repeatedly and consistently proven by radiolabeling of SAM methyl group with carbon-14 (14C-CH3)SAM).[22][20][24][25][26] Evidence in mammals[edit] How Do Hallucinogens (LSD and Psilocybin) Affect the Brain and Body? How Do Hallucinogens Work? Classic hallucinogens are thought to produce their perception-altering effects by acting on neural circuits in the brain that use the neurotransmitter serotonin.6-9 Specifically, some of their most prominent effects occur in the prefrontal cortex—an area involved in mood, cognition, and perception—as well as other regions important in regulating arousal and physiological responses to stress and panic.

The Biological Basis Behind Magic Mushroom Mind Expansion. Psychedelic mushrooms put your brain in a “waking dream,” study finds. By Rachel Feltman July 3 at 8:47 AM REUTERS/Mark Makela Psychedelic mushrooms can do more than make you see the world in kaleidoscope. Research suggests they may have permanent, positive effects on the human brain. In fact, a mind-altering compound found in some 200 species of mushroom is already being explored as a potential treatment for depression and anxiety. People who consume these mushrooms, after “trips” that can be a bit scary and unpleasant, report feeling more optimistic, less self-centered, and even happier for months after the fact. Brain mechanisms of hallucinogens and entactogens.