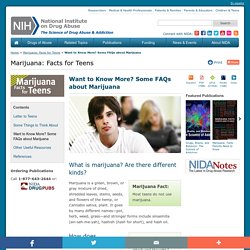 Are there different kinds? Marijuana Fact: Most teens do not use marijuana. Marijuana is a green, brown, or gray mixture of dried, shredded leaves, stems, seeds, and flowers of the hemp, or Cannabis sativa, plant. It goes by many different names—pot, herb, weed, grass—and stronger forms include sinsemilla (sin-seh-me-yah), hashish (hash for short), and hash oil. "I used to smoke pot until I had an anxiety attack and thought I couldn't breathe...

"There are a million things to do that are more fun than smoking some unknown grass. . — Comments submitted to NIDA's blog for teens How does marijuana work? All forms of marijuana are mind altering (psychoactive). How long does marijuana stay in your body? Organs in the body have fatty tissues that quickly absorb the THC in marijuana. Does marijuana use lead to other drugs? Marijuana Fact: Marijuana can be addictive. Exposure to marijuana may affect the brain, particularly during development, which continues into the early 20s. Yes. Some Things to Think About. People smoke marijuana for a lot of different reasons: to feel good, to feel better, to feel different, or to fit in. 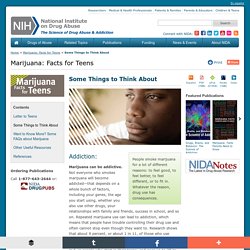 Whatever the reason, drug use has consequences. Addiction: Marijuana can be addictive. Not everyone who smokes marijuana will become addicted—that depends on a whole bunch of factors, including your genes, the age you start using, whether you also use other drugs, your relationships with family and friends, success in school, and so on. Repeated marijuana use can lead to addiction, which means that people have trouble controlling their drug use and often cannot stop even though they want to.

To help you make an informed choice, here are some brief summaries of what marijuana research is telling us. Driving: Drugs and the Brain. Introducing the Human Brain The human brain is the most complex organ in the body. 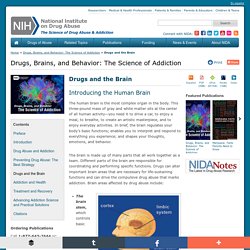 This three-pound mass of gray and white matter sits at the center of all human activity—you need it to drive a car, to enjoy a meal, to breathe, to create an artistic masterpiece, and to enjoy everyday activities. In brief, the brain regulates your body’s basic functions; enables you to interpret and respond to everything you experience; and shapes your thoughts, emotions, and behavior. The brain is made up of many parts that all work together as a team. Different parts of the brain are responsible for coordinating and performing specific functions. The brain stem, which controls basic functions critical to life, such as heart rate, breathing, and sleeping. 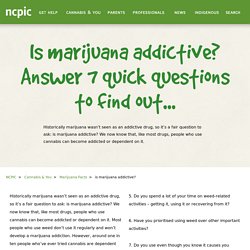