Addiction and the Rat Park experiments. Ela9 rodriguez outline. The Likely Cause of Addiction Has Been Discovered, and It Is Not What You Think. It is now one hundred years since drugs were first banned — and all through this long century of waging war on drugs, we have been told a story about addiction by our teachers and by our governments. 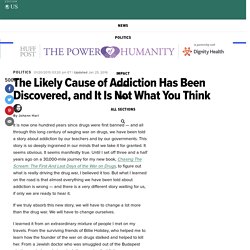 This story is so deeply ingrained in our minds that we take it for granted. It seems obvious. It seems manifestly true. Until I set off three and a half years ago on a 30,000-mile journey for my new book, Chasing The Scream: The First And Last Days of the War on Drugs, to figure out what is really driving the drug war, I believed it too. But what I learned on the road is that almost everything we have been told about addiction is wrong — and there is a very different story waiting for us, if only we are ready to hear it. If we truly absorb this new story, we will have to change a lot more than the drug war.

I learned it from an extraordinary mixture of people I met on my travels. I had a quite personal reason to set out for these answers. When I first learned about this, I was puzzled. Overdose Awareness Day spreads the message that the tragedy of overdose death is preventable. Drug awareness. Hs pp epi. Addiction and the Rat Park experiments. Empower. Connect. Mobilize. Ela9 music power outline. Ela9 wines outline. Ela9 rodriguez outline. Helping schools. In the foreword to his 1980 book, LSD - My Problem Child (McGraw-Hill, 1980), Swiss chemist Albert Hofmann wrote: “It is my desire in this book to give a comprehensive picture of LSD, its origin, its effects, and its dangers, in order to guard against increasing abuse of this extraordinary drug. 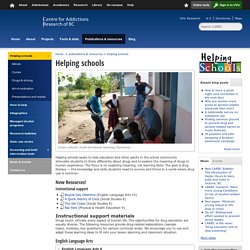 I hope thereby to emphasize possible uses of LSD that are compatible with its characteristic action. I believe that if people would learn to use LSD's vision-inducing capability more wisely, under suitable conditions, in medical practice and in conjunction with meditation, then in the future this problem child could become a wonder child.” The book includes Hofmann's 1943 laboratory notes when he was a Sandoz employee who unwittingly ingested lysergic acid diethylamide (LSD), a semi-synthetic substance he had created for obstetrics purposes, five years earlier.

About midway through the semester last fall my department asked me if I wanted to teach my own course in the spring. 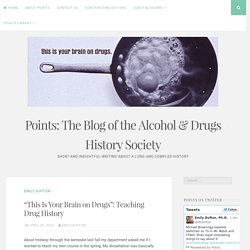 My dissertation was basically complete and, since I wasn’t going on the academic job market this year, I felt that I had the time to dedicate to what I knew would be a fairly demanding task. (Be prepared. Be very prepared.) I also knew what I wanted to teach. After writing a 450-page dissertation on the shifting nature of marijuana laws in the 1970s and ‘80s and the role that social activism played in catalyzing these changes, I knew that I wanted to teach a course about the history of drug use and anti-drug activism in the United States – the good, the bad, and the ugly of all of it. There’s not a lot of guidance out there on how to teach this material. The novelty of starting afresh was thrilling.

But what was particularly telling was how recent, and therefore how insufficiently understood, much of our modern history about drug use is. Like this: Like Loading... Marijuana was criminalized in 1923, but why? - Health. Pot activists in Canada who took part in the annual "Global Marijuana March" on May 3 demanded the decriminalization of marijuana. 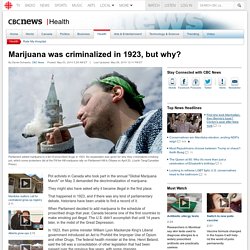 They might also have asked why it became illegal in the first place. That happened in 1923, and if there was any kind of parliamentary debate, historians have been unable to find a record of it. When Parliament decided to add marijuana to the schedule of proscribed drugs that year, Canada became one of the first countries to make smoking pot illegal. The U.S. didn't accomplish that until 14 years later, in the midst of the Great Depression. In 1923, then prime minister William Lyon Mackenzie King's Liberal government introduced an Act to Prohibit the Improper Use of Opium and other Drugs. At the time, the only drugs on the schedule were opium, morphine, cocaine and eucaine (a local anesthetic first introduced as a substitute for cocaine). Theories of Relativity by Barbara Haworth-Attard. ARC Programs Ltd. The Centre for Addictions Research of BC (CARBC) Helping schools. Helping schools Helping schools seeks to help educators and other adults in the school community stimulate students to think differently about drugs and to explore the meaning of drugs in human experience. 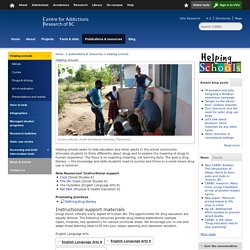