Battle of the Brains

Miscellaneous. Social Study. World. O Canada. Small government. Small government is a term generally used in liberalism, especially by political conservatives and libertarians to describe a government with minimal involvement in certain areas of public policy or the private sector, especially matters considered to be private or personal. 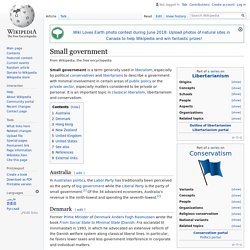 It is an important topic in classical liberalism, libertarianism and conservatism. Junta (governing body) Junta (/ˈhʊntə/ or /ˈdʒʌntə/) is a Spanish, Greek and Portuguese term for a civil deliberative or administrative council. 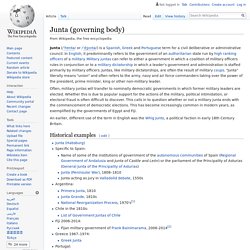 In English, it predominantly refers to the government of an authoritarian state run by high ranking officers of a military. Military juntas can refer to either a government in which a coalition of military officers rules in conjunction or to a military dictatorship in which a leader's government and administration is staffed primarily by military officers. Juntas, like military dictatorships, are often the result of military coups. "Junta" literally means "union" and often refers to the army, navy and air force commanders taking over the power of the president, prime minister, king or other non-military leader.

Often, military juntas will transfer to nominally democratic governments in which former military leaders are elected. Stormy Daniels–Donald Trump scandal. Legal dispute Daniels (2010) and Trump (2011) In August 2018, Cohen pleaded guilty to eight charges, including one related to the scandal, and he stated under oath that he paid Daniels "in coordination with and at the direction of a candidate for federal office," meaning Trump. 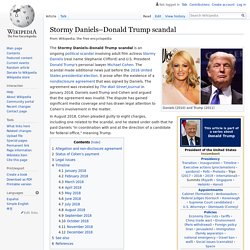 Allegation and non-disclosure agreement[edit] On behalf of his client Donald Trump, on January 14 Cohen denied the existence of the affair,[6] but on February 13 he acknowledged that he paid Daniels $130,000. On March 6, 2018, Daniels filed a lawsuit against Trump, claiming that the nondisclosure agreement she had signed about the alleged affair was invalid because Trump had never personally signed it, despite acknowledging that she accepted the payment made in consideration for her silence in the matter.[7][8] The suit also alleged that Trump's attorney was trying to intimidate Daniels and "scare her into not talking". Spoiler effect. The spoiler effect is the effect of vote splitting between candidates or ballot questions[n 1] who often have similar ideologies. 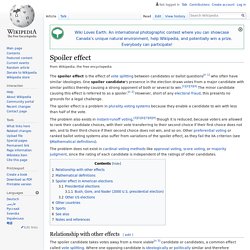 One spoiler candidate's presence in the election draws votes from a major candidate with similar politics thereby causing a strong opponent of both or several to win.[1][2][3][4] The minor candidate causing this effect is referred to as a spoiler. [n 2] However, short of any electoral fraud, this presents no grounds for a legal challenge. The spoiler effect is a problem in plurality voting systems because they enable a candidate to win with less than half of the vote. The problem also exists in instant-runoff voting,[3][5][6][7][8][9] though it is reduced, because voters are allowed to rank their candidate choices, with their vote transferring to their second choice if their first choice does not win, and to their third choice if their second choice does not win, and so on. 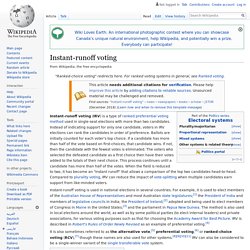 Instead of indicating support for only one candidate, voters in IRV elections can rank the candidates in order of preference. Ballots are initially counted for each voter's top choice. 10 Biggest Scandals Of The Obama Presidency. Perhaps it’s just the nature of the job or maybe a byproduct of the highly partisan political climate in our country but these days every presidency is filled with innumerable scandals. 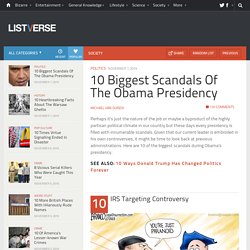 Given that our current leader is embroiled in his own controversies, it might be time to look back at previous administrations. Here are 10 of the biggest scandals during Obama’s presidency. SEE ALSO: 10 Ways Donald Trump Has Changed Politics Forever. Definition and Examples of Broadening in English. Definition Broadening is a type of semantic change by which the meaning of a word becomes broader or more inclusive than its earlier meaning. 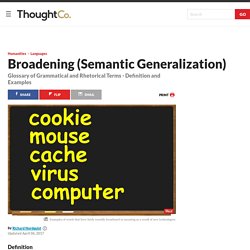 Also known as semantic broadening, generalization, expansion, or extension. The opposite process is called semantic narrowing, with a word taking on a more restricted meaning than it had before. Rhoticity in English. Rhoticity in English refers to English speakers' pronunciation of the historical rhotic consonant /r/, and is one of the most prominent distinctions by which varieties of English can be classified. 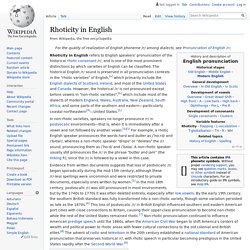 The historical English /r/ sound is preserved in all pronunciation contexts in the "rhotic varieties" of English,[a] which primarily include the English dialects of Scotland, Ireland, and most of the United States and Canada. However, the historical /r/ is not pronounced except before vowels in "non-rhotic varieties",[b] which include most of the dialects of modern England, Wales, Australia, New Zealand, South Africa, and some parts of the southern and eastern—particularly coastal northeastern[4]—United States. 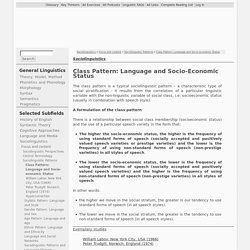 A formulation of the class pattern: There is a relationship between social class membership (socioeconomic status) and the use of a particular speech variety in the form that: The higher the socio-economic status, the higher is the frequency of using standard forms of speech (socially accepted and positively valued speech varieties or prestige varieties) and the lower is the frequency of using non-standard forms of speech (non-prestige varieties) in all styles of speech. In other words: Lexicography. Lexicography is divided into two separate but equally important groups: There is some disagreement on the definition of lexicology, as distinct from lexicography. 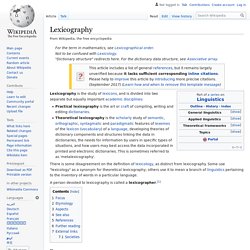 Semitic languages. Language group containing Arabic and Hebrew The Semitic languages are a branch of the Afroasiatic language family originating in the Middle East[2] that are spoken by more than 330 million people across much of Western Asia, North Africa and the Horn of Africa,[3] as well as in often large immigrant and expatriate communities in North America, Europe and Australia.[4][5] The terminology was first used in the 1780s by members of the Göttingen School of History, who derived the name from Shem, one of the three sons of Noah in the Book of Genesis.

The most widely spoken Semitic languages today are (numbers given are for native speakers only) Arabic (300 million),[7] Amharic (22 million),[8] Tigrinya (7 million),[9] Hebrew (~5 million native/L1 speakers),[10] Tigre (~1.05 million), Aramaic (575,000 to 1 million largely Assyrian fluent speakers)[11][12][13] and Maltese (483,000 speakers).[14] Aphasia. Aphasia is an inability to comprehend or formulate language because of damage to specific brain regions.[1] This damage is typically caused by a cerebral vascular accident (stroke), or head trauma; however, these are not the only possible causes.

To be diagnosed with aphasia, a person's speech or language must be significantly impaired in one (or several) of the four communication modalities following acquired brain injury or have significant decline over a short time period (progressive aphasia). The four communication modalities are auditory comprehension, verbal expression, reading and writing, and functional communication. The difficulties of people with aphasia can range from occasional trouble finding words, to losing the ability to speak, read, or write; intelligence, however, is unaffected.[2] Expressive language and receptive language can both be affected as well.

Juxtaposition. Juxtaposition is an act or instance of placing two elements close together or side by side. This is often done in order to compare/contrast the two, to show similarities or differences, etc. Juxtaposition in literary terms is the showing contrast by concepts placed side by side. An example of juxtaposition are the quotes "Ask not what your country can do for you; ask what you can do for your country", and "Let us never negotiate out of fear, but let us never fear to negotiate", both by John F. Spoonerism. An example is saying "The Lord is a shoving leopard" instead of "The Lord is a loving shepherd. " While spoonerisms are commonly heard as slips of the tongue, and getting one's words in a tangle, they can also be used intentionally as a play on words. Etymology[edit] It is named after the Reverend William Archibald Spooner (1844–1930), Warden of New College, Oxford, who was notoriously prone to this mistake.[3][4] The term "Spoonerism" was well established by 1921.

An article in The Times from that year reports that, The boys of Aldro School, Eastbourne, ... have been set the following task for the holidays: Discover and write down something about: The Old Lady of Threadneedle-street, a Spoonerism, a Busman's Holiday...[5] Great Vowel Shift. The Great Vowel Shift was a major change in the pronunciation of the English language that took place in England between 1350 and 1700.[1][2] The Great Vowel Shift was first studied by Otto Jespersen (1860–1943), a Danish linguist and Anglicist, who coined the term.[3] Because English spelling was becoming standardized in the 15th and 16th centuries, the Great Vowel Shift is responsible for many of the peculiarities of English spelling.[4]

Deixis. Words requiring context to understand their meaning Person deixis, place deixis and time deixis in English Although this article draws examples primarily from English, deixis is believed to be a feature (to some degree) of all natural languages.[2] The term's origin is Ancient Greek: δεῖξις, translit. deixis, lit. Jargon. Cultural Reader: Ferdinand de Saussure - langue and parole - Explanation and Summary. Langue and parole. Langue (French, meaning "language") and parole (meaning "speaking") are linguistic terms distinguished by Ferdinand de Saussure in his Course in General Linguistics. Langue encompasses the abstract, systematic rules and conventions of a signifying system; it is independent of, and pre-exists, individual users. Langue involves the principles of language, without which no meaningful utterance, "parole", would be possible.

Pushback. Official Homepage of Faber-Castell. Installation art. What Is The Difference Between "Art, Arts, And The Arts"? Meaning - What is the difference, if any, between 'art', 'the arts', and 'Art'? 7 Things You May Not Know About the Sistine Chapel. Tessellation. Château. Stunning Black Sand Beaches You Have to Visit. Reichstag dome. Mont Saint-Michel. The Natural Firefall, Horsetail Fall. Pig Beach. Flume. Musical or Opera? The Fine Line That Divides Them. Buying Guide: How to Choose Acoustic Guitar Strings. Fairchild Republic A-10 Thunderbolt II.

Occlusion Culling. AAA (video game industry) Player versus environment. Terminology - Is there a difference between "Expansion Pack" and "Downloadable Content"? - Arqade. What are the differences between DLC, Expansion and Episodes? Isometric graphics in video games and pixel art. Leviathan Class Organisms. Episodic video game. Diplomacy (game) - Wikipedia. What is stream sniping? Here's what you need to know about the livestream exploitation tactic in gaming, and how to prevent it.