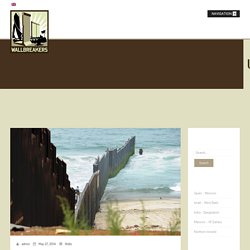 The Secure fence Act was a reaction to problems relating to illegal immigrants, drug trafficking and their alleged connection to terrorist organisations. Until now the project has cost 2.7 billion dollars, but the Congressional Research Service estimated, for improvements and maintenance of the border until 2025, to be 49 million dollars. CNN reporter presses Trump: You promised Mexico would pay for wall.

Friendship Park, at the US - Mexico border

Untitled. Huge Wall Climbed in Antarctica. Walls of Babylon. Babylon, about 85 kilometers south of Baghdad, was one of the great capitals of the ancient world (and most closely associated with King Nebuchadnezzar II, 605-562 BC); but it is also a center-point for myths and stories. 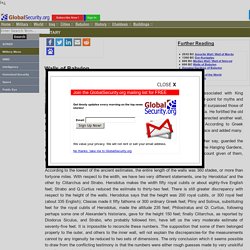 Bellfast Peace Lines. Berlin Wall. Satellite image of Berlin, with the Wall's location marked in yellow West and East Berlin borders overlaying a current road map (interactive map) The Berlin Wall (German: Berliner Mauer, pronounced [bɛʁˈliːnɐ ˈmaʊ̯ɐ] ( listen)) was a guarded concrete barrier that physically and ideologically divided Berlin from 1961 to 1989.[1] Constructed by the German Democratic Republic (GDR, East Germany), starting on 13 August 1961, the Wall cut off (by land) West Berlin from virtually all of surrounding East Germany and East Berlin until government officials opened it in November 1989.[2] Its demolition officially began on 13 June 1990 and finished in 1992.[1][3] The barrier included guard towers placed along large concrete walls,[4] accompanied by a wide area (later known as the "death strip") that contained anti-vehicle trenches, "fakir beds" and other defenses. 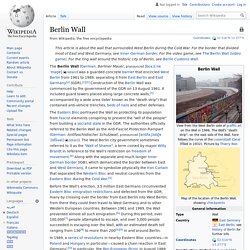 Great Wall of China. In legend, the Chinese dragon is quite a bit different than the European dragon. 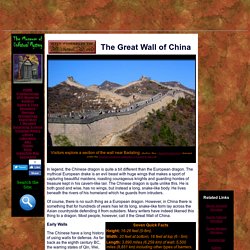 The mythical European drake is an evil beast with huge wings that makes a sport of capturing beautiful maidens, roasting courageous knights and guarding hordes of treasure kept in his cavern-like lair. The Chinese dragon is quite unlike this. He is both good and wise, has no wings, but instead a long, snake-like body. He lives beneath the rivers of his homeland which he guards from intruders. Of course, there is no such thing as a European dragon. Early Walls The Chinese have a long history of using walls for defense. This early wall was constructed of whatever materials were at hand.

Phoenician Walls of Erice - Itinerari del gusto del litorale Trapanese. Hadrian's Wall. Tsunami sea wall by Hamaoka nuclear plant. India – Bangladesh. Walls Except for a gap of about 700 kilometres, all of Bangladesh is fenced in by a concrete and barbed wire fence dotted with watchtowers every 2,9 kilometres. 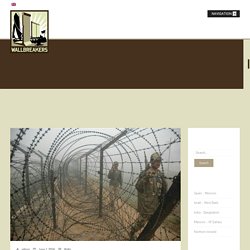 Measuring over 3400 kilometers, this is the longest border fence in the entire world. Only in the years since 2006, almost a 1000 people lost their lives to this fence in some way. Itchan Kala. Itchan Kala Itchan Kala is the inner town (protected by brick walls some 10 m high) of the old Khiva oasis, which was the last resting-place of caravans before crossing the desert to Iran. 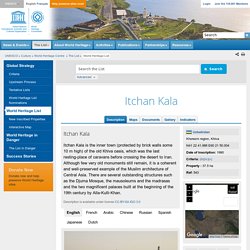 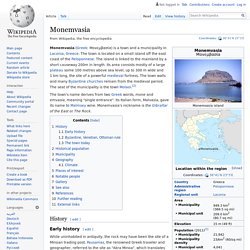 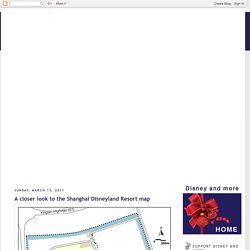 The first version of the map was in black and white but since then i've found it in color as you can see above. And the colors reveal something extremely interesting. If you remind what was written in the text of last week article you probably remember this quote: "Water will be a prominent feature of the amusement park. A river, about 10 kilometers long and 60 meters wide, is being created around the park area...

". Now that we see the map in color you can see clearly on it this "60 meters wide river", in light blue on the plan, making a square all around SDL resort. When i first saw this it reminded me something and i had the feeling that it was more than simply a river going all around the resort. First, you must remember the importance of wall/barrier for Chineses. And, talking about Beijing famous Forbidden "Imperial" City, have a closer look at the picture below. Pure genius idea, really. Picture: copyright Disney. Walls of Ston - Longest fortress system in Europe. Tateyama, Japan Snow Walls (or snow corridor) Ancient Walls of Troy.

Troy is the name of the Bronze Age city attacked in the Trojan War, a popular story in the mythology of ancient Greece, and the name given to the archaeological site in the north-west of Asia Minor (now Turkey) which has revealed a large and prosperous city occupied over millennia. 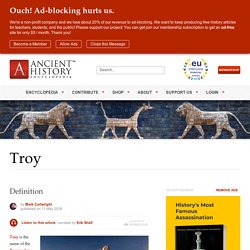 There has been much scholarly debate as to whether mythical Troy actually existed and if so whether the archaeological site was the same city; however, it is now almost universally accepted that the archaeological excavations have revealed the city of Homer’s Iliad. Other names for Troy include Hisarlik (Turkish), Ilios (Homer), Ilion (Greek) and Ilium (Roman).

Western Wall. Holy site of Judaism in Jerusalem The term Western Wall and its variations are mostly used in a narrow sense for the section traditionally used by Jews for prayer; it has also been called the "Wailing Wall", referring to the practice of Jews weeping at the site over the destruction of the Temples. 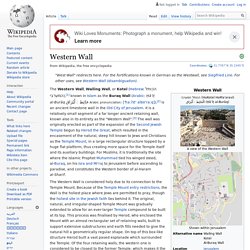 During the period of Christian Roman rule over Jerusalem (ca. 324–638), Jews were completely barred from Jerusalem except to attend Tisha B'Av, the day of national mourning for the Temples, and on this day the Jews would weep at their holy places. The term "Wailing Wall" was thus almost exclusively used by Christians, and was revived in the period of non-Jewish control between the establishment of British Rule in 1920 and the Six-Day War in 1967. The term "Wailing Wall" is not used by Jews, and increasingly not by many others who consider it derogatory.[4]

Great Zimbabwe Walls. 5/10/16: Invisible Radar Wall in the Atmosphere Caused by UV from the Sun. Conflicts and walls in the world. The Glass Ceiling: A Fact Sheet. Bunker.