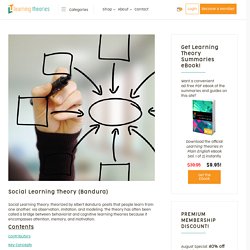 “Most human behavior is learned observationally through modeling: from observing others, one forms an idea of how new behaviors are performed, and on later occasions this coded information serves as a guide for action.” (Bandura). Social learning theory explains human behavior in terms of continuous reciprocal interaction between cognitive, behavioral, and environmental influences. Necessary conditions for effective modeling Attention — various factors increase or decrease the amount of attention paid. Retention — remembering what you paid attention to. Reproduction — reproducing the image. Motivation — having a good reason to imitate. Reciprocal Determinism Social learning theory has sometimes been called a bridge between behaviorist and cognitive learning theories because it encompasses attention, memory, and motivation. Social Learning Theory. Albert Bandura's Social Learning Theory By Saul McLeod, updated 2016 Social learning theory, proposed by Albert Bandura, emphasizes the importance of observing, modelling, and imitating the behaviors, attitudes, and emotional reactions of others. 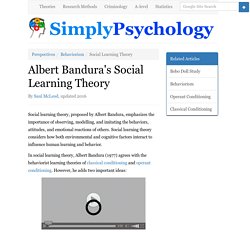 28542 Human development theory: Māori models of human development. Hauora [pronounced ho-or-a] (health and wellbeing) is seen in a holistic way by Māori and encompasses more than just physical health or the absence of illness. 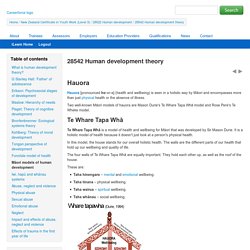 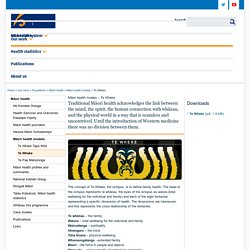 Until the introduction of Western medicine there was no division between them. The concept of Te Wheke, the octopus, is to define family health. Māori health models – Te Whare Tapa Whā. With its strong foundations and four equal sides, the symbol of the wharenui illustrates the four dimensions of Māori well-being. 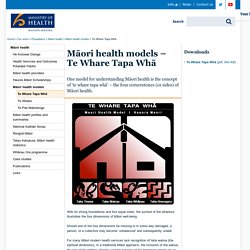 Should one of the four dimensions be missing or in some way damaged, a person, or a collective may become ‘unbalanced’ and subsequently unwell. For many Māori modern health services lack recognition of taha wairua (the spiritual dimension). In a traditional Māori approach, the inclusion of the wairua, the role of the whānau (family) and the balance of the hinengaro (mind) are as important as the physical manifestations of illness. Taha tinana (physical health) The capacity for physical growth and development. Good physical health is required for optimal development. Our physical ‘being’ supports our essence and shelters us from the external environment. Taha wairua (spiritual health) The capacity for faith and wider communication. Health is related to unseen and unspoken energies.

The spiritual essence of a person is their life force. 2.3 Objectivism and behaviourism – Teaching in a Digital Age. 2.2 Epistemology and theories of learning – Teaching in a Digital Age. The AGES model. The concept of ako / Aspects of planning / Teaching and learning te reo Māori / Curriculum guidelines / Home - Te reo Māori. The Difference Between Pedagogy, Andragogy, And Heutagogy. By Terry Heick Jackie Gerstein’s passionate thinking about learning is some of my favorite to read. 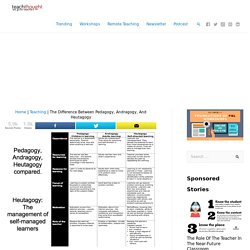 She is rarely pulled down by trend or fad, but is unquestionably progressive and forward-thinking in her approaches to learning and thinking about learning. Further, we share a passion: self-directed learning. (As does the original summarizer/author of the thinking embedded in table above, Lindy McKeown Orwin.) I’m embarrassingly interested in any kind of learning at all–formal or informal, self-directed or teacher-centered, authentic or academic.

Gerstein’s presentation, “Education 3.0 and the Pedagogy of Mobile Learning” uses the concept of mobile learning as a spearhead into a broader discussion of how people learn–different approaches, different domains, and different technologies. Learning theory: models, product and process. Photo by Antenna on Unsplash Contents: introduction · what do people think learning is? 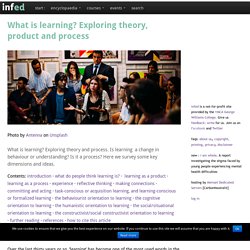 The Adult Learning Theory - Andragogy - of Malcolm Knowles. Malcolm Shepherd Knowles (1913 – 1997) was an American educator well known for the use of the term Andragogy as synonymous to adult education. 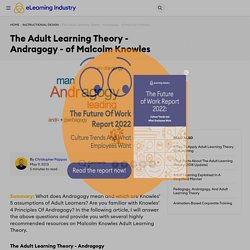 According to Malcolm Knowles, andragogy is the art and science of adult learning, thus andragogy refers to any form of adult learning. (Kearsley, 2010). The term andragogy can be supposedly equivalent to the term pedagogy. Andragogy in Greek means man-leading in comparison to pedagogy, which in Greek means child-leading. However, it should be noted that the term pedagogy has been used since the Ancient Greek times, while Alexander Kapp, a German educator, first used the term andragogy in 1833. Malcolm Knowles, informal adult education, self-direction and andragogy. Contents: introduction · malcolm knowles – life · adult informal education · malcolm s. knowles on andragogy · self-direction · conclusion · further reading and references · links Malcolm Shepherd Knowles (1913 – 1997) was a, perhaps ‘the’, central figure in US adult education in the second half of the twentieth century. 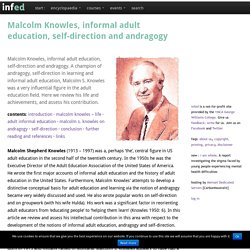 In the 1950s he was the Executive Director of the Adult Education Association of the United States of America. He wrote the first major accounts of informal adult education and the history of adult education in the United States. Furthermore, Malcolm Knowles’ attempts to develop a distinctive conceptual basis for adult education and learning via the notion of andragogy became very widely discussed and used. He also wrote popular works on self-direction and on groupwork (with his wife Hulda). Malcolm Knowles – a life Born in 1913 and initially raised in Montana, Malcolm S.