Into the Dark of Night. Converting D&D Spells. After designing my power creation guidelines in Savage Abilities, I decided to test their versatility by converting various D&D spells (converting the flavour rather than the mechanics). 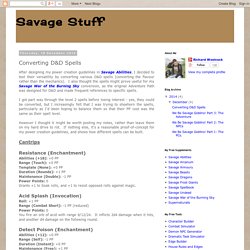 I also thought the spells might prove useful for my Savage War of the Burning Sky conversion, as the original Adventure Path was designed for D&D and made frequent references to specific spells. I got part way through the level 2 spells before losing interest - yes, they could be converted, but I increasingly felt that I was trying to shoehorn the spells, particularly as I'd been hoping to balance them so that their PP cost was the same as their spell level.

However I thought it might be worth posting my notes, rather than leave them on my hard drive to rot. If nothing else, it's a reasonable proof-of-concept for my power creation guidelines, and shows how different spells can be built. Cantrips Resistance (Enchantment) Abilities (+18): +0 PP Range (Touch): +0 PP. Focus Stones (Rune Stones/magical item) Savage Worlds. Lesser Rune stones are created as a general spell foci. 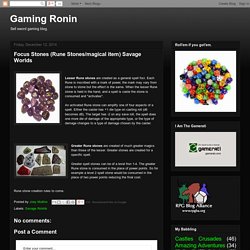 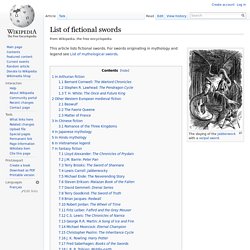 For swords originating in mythology and legend see List of mythological swords. In Arthurian fiction[edit] The sword Excalibur is important in the Matter of Britain — Arthurian literature and myth.[1] Some examples of works which retell the tale of the sword include: Bernard Cornwell: The Warlord Chronicles[edit] Caledfwlch: The sword of Arthur ap Neb, analogous with Excalibur in most traditions.Hywelbane: The sword of Derfel Cadarn, champion of DumnoniaThe Christ-blade (formerly Tanlladwyr, "Brightkiller"): The sword of Sir Lancelot Stephen R. The Sword of Britain (the Sword in the Stone): The sword of Magnus Maximus (Macsen Wledig), Aurelius Ambrosius, Uther, and Arthur consecutively. T.

Excalibur: The sword which "Wart" pulls from the stone, leading him to be crowned King Arthur. Other Western European medieval fiction[edit] Beowulf[edit] NrzQYJU.png (PNG Image, 1280 × 800 pixels) - Scaled (80%) Adventurer’s Toolbox – Bags of Holding » Troll in the Corner. Image by: SoulRider.222 I have written a couple of article in this series already covering Immovable Rods and Feather Tokens. 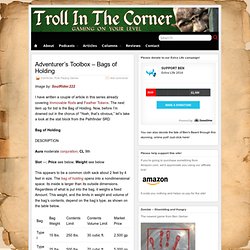 The next item up for bid is the Bag of Holding. Now, before I’m downed out in the chorus of “Yeah, that’s obvious,” let’s take a look at the stat block from the Pathfinder SRD: Bag of Holding Aura moderate conjuration; CL 9th Slot —; Price see below; Weight see below This appears to be a common cloth sack about 2 feet by 4 feet in size. If a bag of holding is overloaded, or if sharp objects pierce it (from inside or outside), the bag immediately ruptures and is ruined, and all contents are lost forever. If a bag of holding is placed within a portable hole, a rift to the Astral Plane is torn in the space: bag and hole alike are sucked into the void and forever lost. 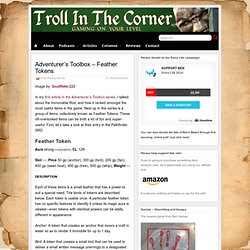 Next up in this series is a group of items, collectively known as Feather Tokens. These oft-overlooked items can be both a lot of fun and super-useful. First, let’s take a look at their entry in the Pathfinder SRD: Feather Token Aura strong conjuration; CL 12th Slot —; Price 50 gp (anchor), 300 gp (bird), 200 gp (fan), 450 gp (swan boat), 400 gp (tree), 500 gp (whip); Weight — Each of these items is a small feather that has a power to suit a special need.

Anchor: A token that creates an anchor that moors a craft in water so as to render it immobile for up to 1 day. Bird: A token that creates a small bird that can be used to deliver a small written message unerringly to a designated target. Fan: A token that forms a huge flapping fan, causing a breeze of sufficient strength to propel one ship (about 25 mph). About Tracy. Adventurer’s Toolbox – Immovable Rods » Troll in the Corner. Image by: SoulRider.222 I figured I would take some time away from my convention coverage to begin a new series. 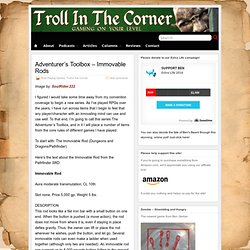 As I’ve played RPGs over the years, I have run across items that I begin to feel that any player/character with an innovating mind can use and use well. To that end, I’m going to call this series The Adventurer’s Toolbox, and in it I will place a number of items from the core rules of different games I have played. To start with: The Immovable Rod (Dungeons and Dragons/Pathfinder) Here’s the text about the Immovable Rod from the Pathfinder SRD: Immovable Rod Aura moderate transmutation; CL 10th Slot none; Price 5,000 gp; Weight 5 lbs. DESCRIPTION This rod looks like a flat iron bar with a small button on one end. CONSTRUCTION Requirements Craft Rod, levitate; Cost 2,500 gp The Immovable Rod, perhaps more than anything else I will cover as a part of this series, is the gold standard of being an ultra-useful item. 1. 2. 3. Let’s break these three things down. 1. 2. 3.