Angry GOP Senate freezes out Obama nominees. Tom Cotton was livid that top Secret Service officials had leaked unflattering information about a GOP congressman who had become one of the embattled agency’s highest-profile critics. 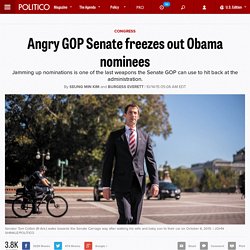 So the freshman Republican senator from Arkansas quickly settled on his payback: He would indefinitely stall ambassadorial nominees to Sweden, Norway and the Bahamas — a former White House counsel, plus two Obama campaign bundlers — until the administration investigated the Secret Service’s misconduct. Story Continued Below It's not just Cotton holding up nominations. Republican senators such as Ted Cruz, John McCain and Chuck Grassley are deploying the tactic at an unprecedented level in their ongoing war with the White House. 5 immigration myths debunked - Nov. 20, 2014. NEW YORK (CNNMoney) His plan has been a tough sell to the American people, especially with the new Republican-controlled Congress. 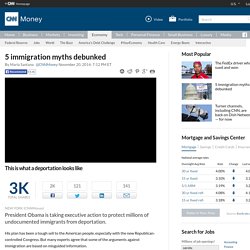 But many experts agree that some of the arguments against immigration are based on misguided information. Here are 5 myths about undocumented immigrants, and why they're wrong. Myth # 1: They don't pay taxes Undocumented immigrants are already U.S. taxpayers. Collectively, they paid an estimated $10.6 billion to state and local taxes in 2010, according to the Institute on Taxation and Economic Policy (ITEP), a research organization that works on tax policy issues. A 2007 Congressional Budget Office (CBO) report on the impact of undocumented immigrants on the budgets of local and state governments cited IRS figures showing that 50% to 75% of the about 11 million unauthorized U.S. immigrants file and pay income taxes each year.

The Government Is Quietly Giving Way More Housing Aid to Rich People Than Poor People. The Center for Budget Policy Priorities released a number of charts today that shows how much the federal government favors high-income households over low-income ones in housing benefits. 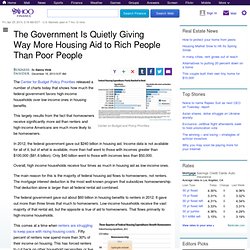 This largely results from the fact that homeowners receive significantly more aid than renters and high-income Americans are much more likely to be homeowners. In 2012, the federal government gave out $240 billion in housing aid. Why the US spends so much on medical care. U.S. Air Force Band Wows Crowd With Most Civilized Flash Mob Ever. Military bands aren’t often considered cutting-edge. 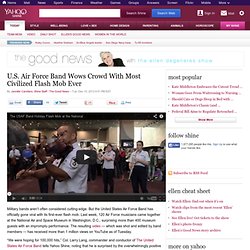 But the United States Air Force Band has officially gone viral with its first-ever flash mob. Last week, 120 Air Force musicians came together at the National Air and Space Museum in Washington, D.C., surprising more than 400 museum guests with an impromptu performance. Police turn routine traffic stops into cavity searches. Timothy Young had just turned into a gas station in Lordsburg, N.M., at 10 p.m. and was about to fill up his pickup truck when several police cars pulled up behind him. 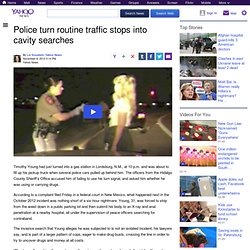 The officers from the Hidalgo County Sheriff’s Office accused him of failing to use his turn signal, and asked him whether he was using or carrying drugs. According to a complaint filed Friday in a federal court in New Mexico, what happened next in the October 2012 incident was nothing short of a six-hour nightmare. A Toxic Love Triangle Heads To The Supreme Court. The U.S. 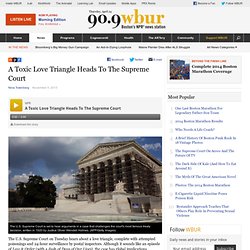 Supreme Court is set to hear arguments in a case that challenges the court's most famous treaty decision, written in 1920 by Justice Oliver Wendell Holmes. Legislative prayer gets Supreme Court review. WASHINGTON (AP) — The Supreme Court, which asks for God's protection before every public session, will settle a dispute over prayer in the halls of government. 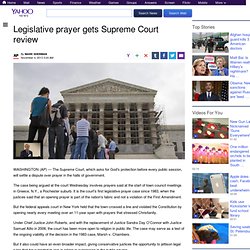 New book: Obama told aides that drones make him 'really good at killing people' President Obama in a 2012 photo in the Oval Office. 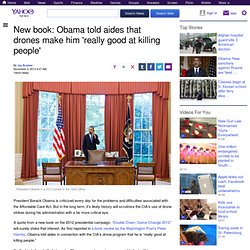 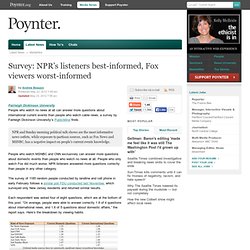 NPR and Sunday morning political talk shows are the most informative news outlets, while exposure to partisan sources, such as Fox News and MSNBC, has a negative impact on people’s current events knowledge. People who watch MSNBC and CNN exclusively can answer more questions about domestic events than people who watch no news at all. People who only watch Fox did much worse. NPR listeners answered more questions correctly than people in any other category. The survey of 1185 random people conducted by landline and cell phone in early February follows a similar poll FDU conducted last November, which surveyed only New Jersey residents and returned similar results. The report explains: Sen. Ted Cruz: I Don't Think President Obama 'Has the Authority' to Order Syria Strike Without Congressional Approval. Contradicting President Obama's assertion, Republican Sen. 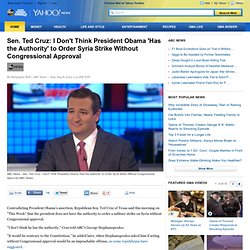 Ted Cruz of Texas said this morning on "This Week" that the president does not have the authority to order a military strike on Syria without Congressional approval. "I don't think he has the authority," Cruz told ABC's George Stephanopoulos. "It would be contrary to the Constitution," he added later, when Stephanopoulos asked him if acting without Congressional approval would be an impeachable offense, as some republicans have suggested.

President Obama said last month that while he was in favor of a military strike on Syria and believed he could order one without Congressional authorization, he would seek the approval of Congress before he ordered military strikes against the Middle Eastern nation for its alleged use of chemical weapons last month that the United States says killed close to 1,500 people, including more than 400 children.

Atheist Acton couple takes Pledge of Allegiance challenge to Supreme Judicial Court - Acton - Your Town. BOSTON (AP) â€” A family asked Massachusettsâ€™ highest court Wednesday to ban the daily practice of reciting the Pledge of Allegiance in public schools, arguing that the words â€˜â€˜under Godâ€™â€™ in the pledge discriminate against atheists. What makes NPR (and the Economist) so special? Farmers worry about fate of immigration bills.