Gameful Pedagogy. GradeCraft. ARIS - Mobile Learning Experiences - Creating educational games on the iPhone. - Gamelearn - Games+Learning+Society Center. Games+Learning+Society Center. E-Line Media. Home - Customer Engagement Platform For Utilities. SuperBetter. Zamzee Physical Activity Program for Families. Gameblox. You've Been Faced - The Zappos Experience. Best Gamification Books - Where to start and Why. Here's a list I wanted to share with you all on (almost) all the books that you should read if you are to become a gamification expert (still a long way for me, want to join?) 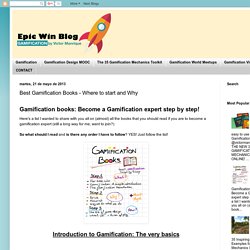 A Theory of Fun for Game Design. Gamification Archives - EI Design Blog. Bartle's Taxonomy of Player Types (And Why It Doesn't Apply to Everything) Richard Bartle co-created MUD (Multi-User Dungeon), the text-based precursor to today's MMORPGs, while studying at Essex University. 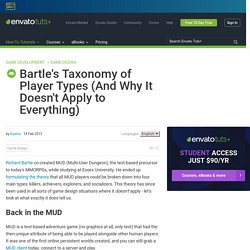 He ended up formulating the theory that all MUD players could be broken down into four main types: killers, achievers, explorers, and socializers. This theory has since been used in all sorts of game design situations where it doesn't apply - let's look at what exactly it does tell us. MUD is a text-based adventure game (no graphics at all, only text) that had the then-unique attribute of being able to be played alongside other human players. It was one of the first online persistent worlds created, and you can still grab a MUD client today, connect to a server and play. It's a simplified version of pen and paper role-playing games in that the player has to imagine the world according to the information the Game Master (the server and the writer of the game, in this case) provides. 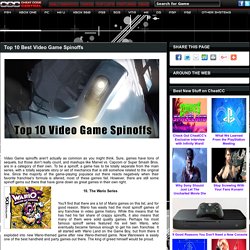 Sure, games have tons of sequels, but those don't really count, and mashups like Marvel vs. Massively Overthinking: Let’s take the classic Bartle test – Massively Overpowered. Here’s something you probably didn’t know: Online worlds researcher Dr. 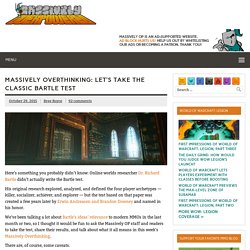 Richard Bartle didn’t actually write the Bartle test. His original research explored, analyzed, and defined the four player archetypes — killer, socializer, achiever, and explorer — but the test based on that paper was created a few years later by Erwin Andreasen and Brandon Downey and named in his honor. We’ve been talking a lot about Bartle’s ideas’ relevance to modern MMOs in the last month or two, so I thought it would be fun to ask the Massively OP staff and readers to take the test, share their results, and talk about what it all means in this week’s Massively Overthinking. There are, of course, some caveats. Breaking the Rules of Game Design: When to Go Against Competence, Autonomy and Relatedness. Selfdeterminationtheory.org - An Approach to human motivation & personality.

Search for "gamification" - eLearning Industry. SPENT. Center for the Study of Digital Games and Play. GameDuell: Online Games - Real People, Real Prizes. Gamified - Gamification News - and stuff I like. World Congress 2015 #GWC15. What is Gamification? Gamification is the concept of applying game mechanics and game design techniques to engage and motivate people to achieve their goals.[1] Gamification taps into the basic desires and needs of the users impulses which revolve around the idea of Status and Achievement. 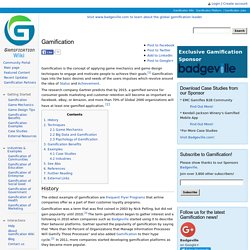 The research company Gartner predicts that by 2015, a gamified service for consumer goods marketing and customer retention will become as important as Facebook, eBay, or Amazon, and more than 70% of Global 2000 organizations will have at least one gamified application. [2] Nick Pelling's Home Page. Video Game Design. XSeries Program Overview Imagine what it would be like to turn your love of playing video games into a career. 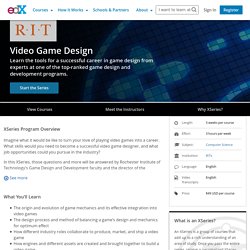 What skills would you need to become a successful video game designer, and what job opportunities could you pursue in the industry? In this XSeries, those questions and more will be answered by Rochester Institute of Technology’s Game Design and Development faculty and the director of the International Center for the History of Electronic Games at The Strong National Museum of Play. You will learn how various roles within the video game design discipline work together, helping you dive deeper into your area of interest and the career paths available. 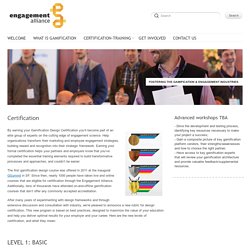 How to Effectively Use Gamification in Education with Moodle. About ETR Community EdTechReview (ETR) is a community of and for everyone involved in education technology to connect and collaborate both online and offline to discover, learn, utilize and share about the best ways technology can improve learning, teaching, and leading in the 21st century. 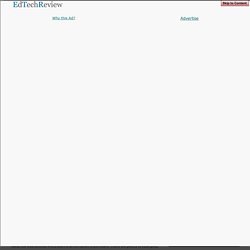 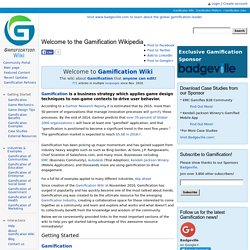 According to a Gartner Research Report, it is estimated that by 2015, more than 50 percent of organizations that manage innovation processes will gamify those processes. By the end of 2014, Gartner predicts that over 70 percent of Global 2000 organizations will have at least one "gamified" application, and that "gamification is positioned to become a significant trend in the next five years. " The gamification market is expected to reach $5.5B in 2018. Gamification has been picking up major momentum and has gained support from industry heavy weights such as such as Bing Gordon, Al Gore, J.P. Rangaswami, Chief Scientist of Salesforce.com, and many more. For a full list of examples applied to many different industries, skip ahead Getting Started. Yu-kai Chou: Gamification & Behavioral Design - Learn how to use Gamification to make a positive impact on your work and life.

Enterprise Gamification Consultancy - Start. Patience is a rare commodity these days, as we live in an age of instant gratification. 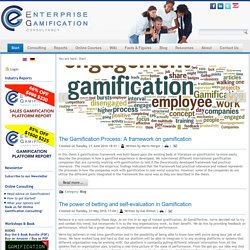 At GamEffective, we've decided not to try and combat this trend, but incorporate it in to the way organizations work, to their benefit. We do this by providing feedback on performance, which has a great impact on employee motivation and performance. The Art & Business of Making Games. Gamification World Meetups Spain (Madrid) Smartick: Matemáticas para niños. Gamification of Learning. Learn how incorporating a sense of play into your classroom or elearning environment can make your content more engaging and help students retain more information. Keyboard Shortcuts Overview Transcript View Offline Exercise Files Released Gamification is an underutilized element in instructional design, but it's crucial to engaging today's learners and enabling content mastery.

In this course, professor, instructional game designer, and author Karl Kapp lays the foundations of the theory, provides examples of gamification in three real-world learning scenarios, and breaks down the dynamics of gamification (aka what makes games fun!) Duolingo: Apprenez l'anglais, l'espagnol et + gratuitement. Dragonbox - Bringing math to life.

ClassDojo. A Futuristic Short Film HD: by Sight Systems. P.S. Be Brave. Mind the Sheep! - Brain-Computer Game. The Blood Typing Game. SPENT. Students and Employers Benefit in Real World PBL. By Dawne Adams and Robin Willner The Pathways in Technology Early College High School (P-TECH) 9-14 model launched in Brooklyn, New York in 2011. Serving every region and major industry in New York State with 38 schools for fall 2016, it re-imagines the pathway for students to complete their first college degree and step into a middle career.

From the first, PBL has been a critical program element for P-TECH, offering students the opportunity to master professional skills for the workplace while assuring that every student, regardless of their academic preparation, will master rigorous academic and technical skills. Game Based Learning: Serious Educational Play. There is a common misperception that game based learning is about what has been labeled as “edutainment” or “chocolate-covered broccoli.” There is a fallacy underlying these sorts of games that goes like this: Students like gamesGames have levels and mechanics and pointsIf we add these things to learning content, students will like the content Not so much. In edutainment games, the game mechanics are completely divorced from the learning goals. For instance, the game might ask you to pop bubbles to demonstrate your knowledge of addition facts – what the student wants to get good at are the mechanics, bubble popping, but what the game wants the student to learn is math.

Serious Gaming: Entertainment Technology Yields Results for Research Ranging from Defense to K-12 Education. In a laboratory at the Georgia Institute of Technology, researchers gaze intently into a line of large flat-screen monitors. Using hand-held devices and famous-name gaming software, they guide on-screen vehicles through winding streets and around or over obstacles.

Groans can be heard when a vehicle doesn't make the grade. No, it's not break time in the lab. The gaming activity here is serious, aimed at investigating ways in which a robot might move through complex environments. Game Theory Is Useful, Except When It Is Not. Nobel prize laureate John Forbes Nash, mathemetician and game theorist, in May, 2005. Applying Game Theory to Real Life Situations. UNHCR: My Life as a Refugee. Ian Bogost. Issue 1103, 2011. Persuasive Gaming in Context. Unmanned: a Game by Molleindustria and Jim Munroe. The Best Amendment Indie Game Takes On the NRA. In the weeks after the shooting at the Sandy Hook Elementary School in Newtown, Connecticut last December, National Rifle Association vice president Wayne LaPierre lodged a fiery rant against gun control legislation with what appears to be the lobbyist group’s core argument: “The only thing that stops a bad guy with a gun is a good guy with a gun.”

The Best Amendment, a satirical PC game, aims to shoot a few holes in that argument. The first level is straightforward. You’re a little white cone-shaped fella, and you need to go get the star before the timer runs out. Free Online Games - Play Strategy Games and RPG Online for free! Elvenar. Poverty Is Not A Game. Posted by admin on April 20th, 2016 Poverty Is Not a Game (PING) – A game about poverty. Ayiti: The Cost of Life. From Theory-Based Design to Validation and Back. PGiC group will be participating at the Etmaal 2015 conference with a panel on Games for Social Change. The ETMAAL (24 Hours of Communication Sciences) is an annual conference organised under the patronage of NeFCA, the Netherlands Flanders Communication Association, which brings together communication scholars from Flanders, the Netherlands and beyond.

My Cotton Picking Life - Game The News. How long will you spend picking cotton in this exploration of child labor in Uzbekistan? This game comes originally from a news article on the Guardian website that reported on the scandal of cotton picking by kids in Uzbekistan that are used to make clothes, supplied to people in the west. Untitled. Gamedesignconcepts / FrontPage. This site is only open for write access to those who were registered for the Summer 2009 course. If you want to create new sections of this wiki or use it for something new, feel free. What is linked to below is just, potentially, the beginning. If you've completed the course and are wondering what to do next, here is the next steps page. Official Websites. The Acagamic » usable game science, research, technology « Professor Blog. David Edery & Ethan Mollick. From Digital Distraction to Profitable Pastime Everywhere we go these days, the ubiquitous nature of video games is hard to avoid.

People are now playing them on their cell phones, home computers and even their computers at work, not to mention the many portable and home gaming systems that have completely shaken up the entertainment industry. Changing The Game Project. Startup Innovation. Pong Game. Stop Disasters.