Italian with Grammar. Italian with Grammar by Mark Twain (1835-1910) Word Count: 2623 I found that a person of large intelligence could read this beautiful language with considerable facility without a dictionary, but I presently found that to such a parson a grammar could be of use at times. 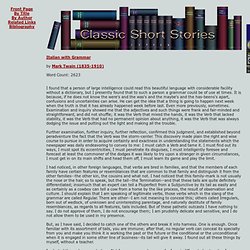 It is because, if he does not know the were's and the was's and the maybe's and the has-beens's apart, confusions and uncertainties can arise. He can get the idea that a thing is going to happen next week when the truth is that it has already happened week before last. Even more previously, sometimes. Further examination, further inquiry, further reflection, confirmed this judgment, and established beyond peradventure the fact that the Verb was the storm-center.

But, as I have said, I decided to catch one of the others and break it into harness. L'aménagement linguistique dans le monde: page d'accueil. Les Accents Français. Matteo Pericoli - Homepage. <The Meaning of Tingo> 20 awesomely untranslatable words from around the world.

Mental_floss Blog » 15 Wonderful Words With No English Equivalent. The Global Language Monitor estimates that there are currently 1,009,753 words in the English language. Despite this large lexicon, many nuances of human experience still leave us tongue-tied.

And that’s why sometimes it’s necessary to turn to other languages to find le mot juste . Here are fifteen foreign words with no direct English equivalent. 1. Zhaghzhagh (Persian) The chattering of teeth from the cold or from rage. 2. 3. 4. 5. 6. A word that would aptly describe the prevailing fashion trend among American men under 40, it means one who wears the shirt tail outside of his trousers. 7. 8. 9. 10. 11. 12. 13. 14. 15. Mental_floss Blog » 14 More Wonderful Words With No English Equivalent.

Earlier this year, Bill DeMain introduced us to 15 Wonderful Words With No English Equivalent . Now that you've integrated those into your vocabulary, here are 14 more. 1. Shemomedjamo (Georgian) You know when you’re really full, but your meal is just so delicious, you can’t stop eating it? The Georgians feel your pain. This word means, “I accidentally ate the whole thing. " The guide to languages, alphabets and other writing systems. Translations of My hovercraft is full of eels in many languages. French idioms. Endangered languages encode plant and animal knowledge - environment - 19 February 2007.

Saving indigenous languages from extinction is the only way to preserve traditional knowledge about plants and animals that have yet to be discovered by Western scientists, says a linguist and cultural expert. 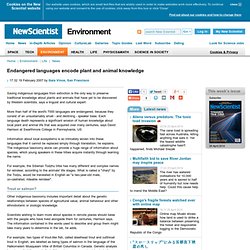 More than half of the word's 7000 languages are endangered, because they consist of an unsustainably small - and declining - speaker base. Each language death represents a significant erosion of human knowledge about local plant and animal life that was acquired over many centuries, says David Harrison at Swarthmore College in Pennsylvania, US. Information about local ecosystems is so intricately woven into these languages that it cannot be replaced simply through translation, he explains.

The indigenous taxonomy alone can provide a huge range of information about species, which young speakers in these tribes acquire instantly through learning the name. For example, the Siberian Todzhu tribe has many different and complex names for reindeer, according to the animals' life stages. American English Dialects. Linguistic oddities. At some point, all native speakers have sometimes considered some of the oddities of English—we all once struggled to spell words like laugh and through.

But when you live abroad, you’re regularly bombarded with questions from non-native speakers about things you’ve never considered before, but when you think about them, they’re downright strange. For example, I once had to explain to someone that while “fear” and “fright” mean the same thing, “fearful” and “frightful” are almost opposites (fearful = frightened, frightful = terrible). Papers by non-native speakers often use the word “economical” (cost-saving) when they mean “economic” (having to do with the economy). 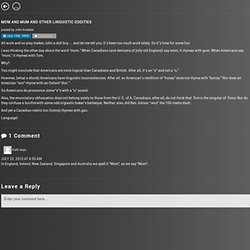 So it’s time for some fun. I was thinking the other day about the word “mom.” When Canadians (and denizens of jolly old England) say mom, it rhymes with gum.