Pregnancy Care - Making Sure You Do The Right Things. Pregnancy care is a big part of a soon-to-be mother’s life. 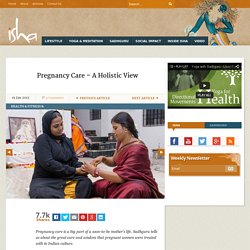 Sadhguru tells us about the great care and wisdom that pregnant women were treated with in Indian culture. Karezza: Victorian Tantra. By David Haenke and catherine yronwode [Reprinted from New Age Magazine, July 1977, pp. 68-69] (Note: This was the first short article i wrote about Sacred Sex, and one of the first about the subject to appear in a national magazine during the 1970s. 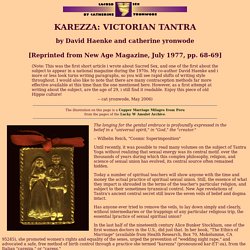 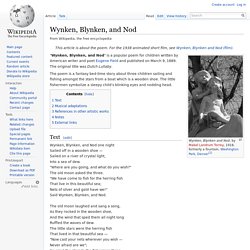 The original title was Dutch Lullaby. The poem is a fantasy bed-time story about three children sailing and fishing amongst the stars from a boat which is a wooden shoe. The little fishermen symbolize a sleepy child's blinking eyes and nodding head. Text[edit] Wynken, Blynken, and Nod one night Sailed off in a wooden shoe — Sailed on a river of crystal light, Into a sea of dew.

The old moon laughed and sang a song, As they rocked in the wooden shoe, And the wind that sped them all night long Ruffled the waves of dew. Wynken and Blynken are two little eyes, And Nod is a little head, And the wooden shoe that sailed the skies Is a wee one's trundle-bed. Musical adaptations[edit] References in other artistic works[edit] Notes[edit] The iconic video game Pac-Man, released in 1980, has 4 ghosts to be avoided, named "Blinky", "Pinky", "Inky", and "Clyde".

Domino Effect – A Child Welfare Fable. Everyone knows about dominoes. 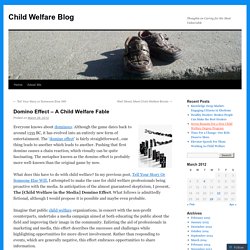 Although the game dates back to around 1355 BC, it has evolved into an entirely new form of entertainment. The ‘domino effect‘ is fairly straightforward…one thing leads to another which leads to another. Pushing that first domino causes a chain reaction, which visually can be quite fascinating. The metaphor known as the domino effect is probably more well-known than the original game by now. American Mindfulness Research Association Mindfulness curriculum promotes prosocial behavior in preschoolers - American Mindfulness Research Association. Posted: 12.15.2014 | by AMRA. 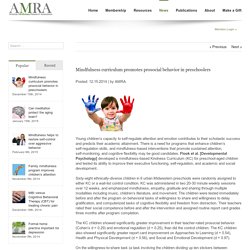 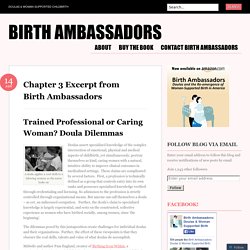 Two studies published in early 2013 offer the opportunity to address this complex question. Monitoring your Newborns Weight Gain. It seems some of the most common questions that parents hear from the moment a new baby arrives is “what does the baby weigh?” 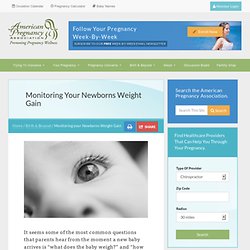 And “how is the baby growing?” The weight of a newborn is often used as a marker of general health, so it makes sense that it’s something everyone is watching. But how is a parent to know if their child is gaining weight properly? Breasts « Mike's Meandering Mind. For some reason, breasts have been in the news lately. Not one but two scholarly works are out, one of which is nicely skeptical about all the received wisdom about their form, function etc. Apart from my Y-chromosome issues, I find this subject interesting because of the discussions about precisely why men are attracted to women with large breasts. 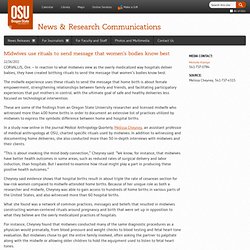 The midwife experience uses these rituals to send the message that home birth is about female empowerment, strengthening relationships between family and friends, and facilitating participatory experiences that put mothers in control, with the ultimate goal of safe and healthy deliveries less focused on technological intervention. These are some of the findings from an Oregon State University researcher and licensed midwife who witnessed more than 400 home births in order to document an extensive list of practices utilized by midwives to express the symbolic difference between home and hospital births.

In a study now online in the journal Medical Anthropology Quarterly, Melissa Cheyney, an assistant professor of medical anthropology at OSU, charted specific rituals used by midwives. Midwives Use Rituals to Empower Mothers. We have watched a shifting of birthing protocols over the past few years and a restoration of the role of the midwife. 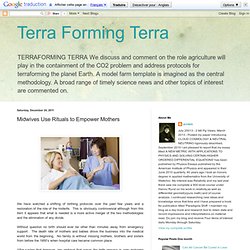 This is obviously controversial although from this item it appears that what is needed is a more active merger of the two methodologies and the elimination of any divide. Without question no birth should ever be other than minutes away from emergency support. The death rate of mothers and babies drove the business into the medical world from the beginning. No family is without missing mothers, brothers and sisters from before the 1950’s when hospital care became common place.

Who Decides What Patients Need to Know? The American College of Medical Genetics and Genomics (ACMG) released a report on "incidental findings" in genetic tests on March 21, and kicked up a storm of controversy within the field of medical ethics. 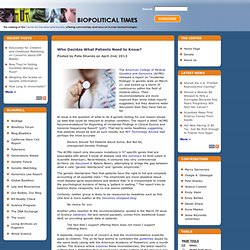 Their recommendations are more nuanced than some initial reports suggested, but they deserve wider discussion than they have had so far. At issue is the question of what to do if genetic testing for one reason shows up data that could be relevant to another condition. The report is titled "ACMG Recommendations for Reporting of Incidental Findings in Clinical Exome and Genome Sequencing Report" [pdf].

That led to some headlines suggesting that patients should be told all such results, but MIT Technology Review had perhaps the most accurate: Doctors Should Tell Patients About Some, But Not All, Unexpected Genetic Findings. ACMG_Releases_Highly-Anticipated_Recommendations_on_Incidental_Findings_in_Clinical_Exome_and_Genome_Sequencing. ThinkTwice Global Vaccine Institute: Avoid Vaccine Reactions. Vaccines Don’t Protect: Exposing the Vaccination for Immunity Fraud. Paul Fassa, Natural SocietyWaking Times There are two primary guilt trips used on parents who refuse vaccinations for their children.

The first is absurd enough to be laughable – the peer pressure tactic of not letting children who weren’t vaccinated around parents’ vaccinated children. But if your kids were vaccinated, they’re supposed to be protected. right? Actually, many children contract the disease vaccinated against. Millions of Children Infected with 'Vaccine Safety Experts' Rotateq. This should help, from one of our advisers Judy Mikovits, PhD: "It is simply misrepresentation of the literature and available data to suggest the presence of these retroviruses elements are of no concern simply because they are not replication competent.

There is a body of literature of more than two decades showing defective retroviral elements can have deleterious effects in humans. There are four primary areas of concern; these elements can: Global Strategy for Women's and Children's Health.  How Soon Is Now? Prenatal Tests Racing from Theory to Practice. Only a couple of years ago, people were amazed at the idea of genetically testing a fetus using no more than a pin-prick of the mother's blood. Suddenly, the tests have become big business: Illumina recently paid almost half a billion dollars to acquire Verinata, one of at least four companies selling fetal tests, with Sequenom, Ariosa and Natera. Perhaps as a sign of the money to be made, lawsuits have been flying among them. The talk is now of the tests' scope being determined not by the technology but by the market for it. Non-invasive prenatal genetic testing was theorized at least 15 years ago, and demonstrated in principle by 2008.

New gene therapy births 'designer baby' fears. London, UK - Fertility regulators in the UK have paved the way for the introduction of a radical form of gene therapy in which babies are created using cellular material from three people. The Human Fertilisation and Embryology Authority (HFEA) advised the government recently that there is no evidence "mitochondrial replacement" - an advanced form of in-vitro fertilisation - is unsafe, and ministers will now decide whether to proceed with the technique. Critics say the move is the first step on a slippery slope towards the creation of "designer babies" built to order that heralds a new era of "consumer eugenics" - with potentially disastrous implications for humankind.