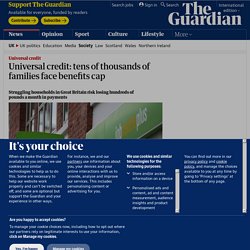 Many claimants who lost their jobs in March under the first coronavirus lockdown and have been unemployed since then will be informed in December by the Department for Work and Pensions (DWP) that their benefits will be slashed unless they find work. If they are capped, these households face benefit income losses averaging about £250 a month from January.

For some families living in high rent areas such as London, being capped could leave them several hundred pounds a month out of pocket. Rishi Sunak's failure to give councils the funding they need will cost lives. Rishi Sunak’s spending review will cost lives and cause yet more cuts in local services. 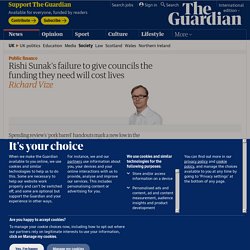 But he still found the cash for a red wall bung. If there were any lessons about spending priorities during the pandemic it is that investing in public health services saves lives, but Sunak offered nothing. Jeremy Corbyn visits homeless centre amid growing concern over crisis. Jeremy Corbyn has paid an unannounced visit to a centre for homeless people in London run by the charity Crisis, where he helped to entertain rough sleepers amid growing concern about the scale of the problem in the UK. 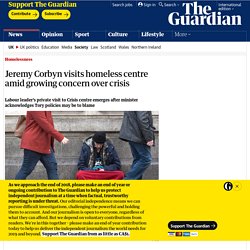 The Labour leader was not accompanied by any reporters or photographers for the visit, which took place on Sunday, with the visit only becoming public after photographs were shared on social media. A Labour spokesperson confirmed that Corbyn made a “private visit” to a centre in his constituency. Crisis, which campaigns against rough sleeping and provides services for homeless people throughout the year, has organised events and drop-in centres in London, Birmingham, Coventry, Edinburgh, Newcastle, Oxford and south Wales during the Christmas period. 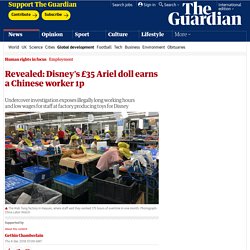 She sparkles. And she’s made by women paid just 1p for each doll that shimmers off shop shelves. Britain’s low-paid face decade of wage squeeze. The wages of 10 million low-paid workers have stalled for two decades and face pressure for a decade to come, according to a bleak assessment of Britain’s future jobs market. 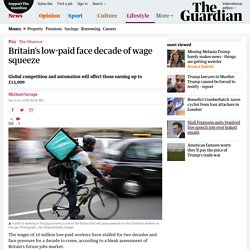 Global economic competition, automation, the shift to the gig economy and a widening regional divide will see further pressure placed on the incomes of those earning between £10,000 and £15,000, it warns. Technology will widen pay gap and hit women hardest – Davos report. The gulf between men and women at work – in both pay and status – is likely to widen unless action is taken to tackle inequality in high-growth sectors such as technology, say researchers at this week’s World Economic Forum summit in Davos. 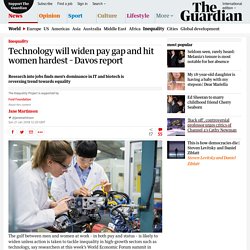 A new WEF report on the future of jobs finds the dominance of men in industries such as information and biotechnology, coupled with the enduring failure of women to rise to the top even in the health and education sectors, is helping to reverse gender equality after years of improvements. The report estimates that 57% of the jobs set to be displaced by technology between now and 2026 belong to women. According to Saadia Zahidi, the WEF’s head of education, gender and work, this underlines that global efforts to reduce gender inequality in business are stalling. “We’re really looking at a worsening of inequality, particularly in IT but across all sectors,” Zahidi said. “We are losing valuable opportunity to reduce gender inequality.” ‘There’s no life here’: a journey into Britain’s precarious future. At the Ebbw Vale steelworks in the south Wales valleys, thousands of men once laboured to produce the steel that helped to drive Britain’s industrial revolution. 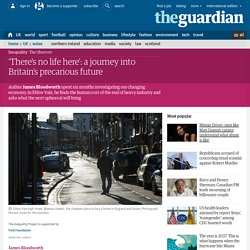 The steelworks closed for good 15 years ago, and today a familiar fare decorates the town’s mournful high street: pound shops, arcades, bookies. On the brief walk from one end to the other, I count three pawnbrokers. “It ain’t worth looking for any work up here,” Rob Smyth, a youth worker tells me. Why do ministers do nothing about bosses who steal from the low-paid? Large numbers of employers are it seems now in the habit of shortchanging their staff as a deliberate strategy to increase profits. 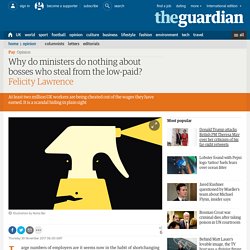 At least 2 million workers a year in the UK are being cheated of pay they are owed. We should all be working a four-day week. Here’s why. Imagine there was a single policy that would slash unemployment and underemployment, tackle health conditions ranging from mental distress to high blood pressure, increase productivity, help the environment, improve family lives, encourage men to do more household tasks, and make people happier. 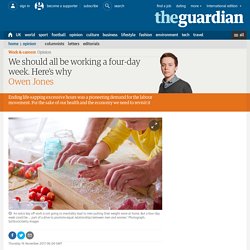 It sounds fantastical, but it exists, and it’s overdue: the introduction of a four-day week. The liberation of workers from excessive work was one of the pioneering demands of the labour movement. From the ashes of the civil war, American trade unionism rallied behind an eight-hour day, “a movement which ran with express speed from the Atlantic to the Pacific, from New England to California”, as Karl Marx put it. In 1890 hundreds of thousands thronged into Hyde Park in a historic protest for the same demand. It is a cause that urgently needs reclaiming. Richest 1% own half the world's wealth, study finds. The globe’s richest 1% own half the world’s wealth, according to a new report highlighting the growing gap between the super-rich and everyone else. 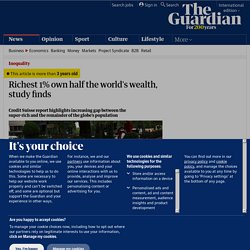 The world’s richest people have seen their share of the globe’s total wealth increase from 42.5% at the height of the 2008 financial crisis to 50.1% in 2017, or $140tn (£106tn), according to Credit Suisse’s global wealth report published on Tuesday. Paradise Papers: who's who in the leak of offshore secrets. Key revelations from the Paradise Papers. A fair, decent society needs a real living wage for its workers. Tia’s plea was simple and direct. If her mother Sandra was paid the living wage, she wouldn’t have to work around the clock to make ends meet, Tia would be able to see her in the evenings; they could have a family life. Tia Sanchez made her plea as she stood alongside her mother, and her grandmother Martha – both cleaners in Whitehall, both obliged to travel to work at dawn each morning – before hundreds of members of Citizens UK, a community organisation, and guest speakers Gordon Brown, then prime minister, and the leader of the opposition, David Cameron, both coming to the end of a general election campaign.

Brown was visibly moved by Tia’s testimony. And Cameron responded positively. The call – for an income based on the amount an individual needs to earn to cover the basic costs of living – was, he said, an idea whose time had come. UK's low pay culture traps people in poorly paid jobs, study finds. Britain’s low pay culture traps people in poorly paid jobs and prevents them from escaping into full-time work with better pay, according to a major study by the government-backed body that tracks social mobility. Only one in six workers on low pay managed in the last 10 years to push themselves up the pay ladder and stay there, while most remained stuck in a cycle of part-time and insecure jobs.

The analysis by the Social Mobility Commission found that a quarter of low-paid workers remained permanently stuck in low pay and nearly half (48%) fluctuated in and out of it over the course of the last 10 years. Alan Milburn, the former Labour MP and health minister who heads the commission, said the study showed that successive governments had failed to reduce inequality between rich and poor despite two decades of interventions. IMF: higher taxes for rich will cut inequality without hitting growth. Higher income tax rates for the rich would help reduce inequality without having an adverse impact on growth, the International Monetary Fund has said. The Washington-based IMF used its influential half-yearly fiscal monitor to demolish the argument that economic growth would suffer if governments in advanced Western countries forced the top 1% of earners to pay more tax.

The IMF said tax theory suggested there should be “significantly higher” tax rates for those on higher incomes but the argument against doing so was that hitting the rich would be bad for growth. More than half of Londoners in poverty are in working families. More than half of the 2.3 million Londoners living in poverty are members of households in which someone is earning money, research has found. The overall poverty rate in London has fallen slightly from 29% to 27% over the past six years, because of rising employment levels, but having a job is not enough to protect a huge number of residents from financial hardship.

According to a study by the Trust for London, 58% of Londoners who are in poverty are living in a working family, the highest this figure has ever been. The proportion is up from 44% a decade ago and 28% two decades ago. Neoliberalism: the idea that swallowed the world. Last summer, researchers at the International Monetary Fund settled a long and bitter debate over “neoliberalism”: they admitted it exists. Three senior economists at the IMF, an organisation not known for its incaution, published a paper questioning the benefits of neoliberalism. In so doing, they helped put to rest the idea that the word is nothing more than a political slur, or a term without any analytic power. The paper gently called out a “neoliberal agenda” for pushing deregulation on economies around the world, for forcing open national markets to trade and capital, and for demanding that governments shrink themselves via austerity or privatisation.

The authors cited statistical evidence for the spread of neoliberal policies since 1980, and their correlation with anaemic growth, boom-and-bust cycles and inequality. Don’t let the rich get even richer on the assets we all share. What will cost more than lifting the public sector pay cap? Not lifting it. The Conservatives are finally backing down on the public sector pay cap – but not without a fight, and not without confusing the maths. I’m guessing the government thought our fear of numbers wouldn’t allow us to work out that inflation of 2.9% means their announcement of 1.7% and 2% respectively for prison staff and police wasn’t really a pay rise.

Luckily, we’re not quite that bad at maths.