10 Things GOOD with Social Media. Social Media Revolution. Wendy: Wherever we are, thanks to devices like these, we can all feel connected. 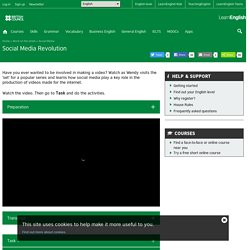 They’ve created a media revolution. Ah! Just been sent the address and a picture of the place we need to go. So come on! This must be it. Director: Action! Policeman 1: AAAAAH! Policeman 2: Right, you then, over here! Wendy: But what’s unusual here is that this programme isn’t being made for television. Angel: Ian! Ian: Angel! Samuell: No, Angel, get out! Angel: Technically, I’m not in the room … Ian: She’s right, bro. Samuell: Shut up, both of you. Wendy: Now, they are filming the third series. #LIKELIFE! World with vs World without Social Media. Moby & The Void Pacific Choir - Are You Lost In The World Like Me.

Untitled. Google Image Result for. A Day In The Life Of The Average Social Teen - infographic. Social Media Platforms Most Liked by Teens. Teens love to spend their time on the Internet because it is a place where they can start connecting with people and spark engaging conversations. 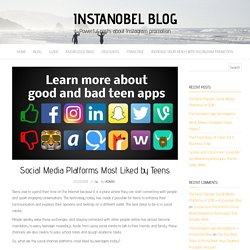 The technology today has made it possible for teens to enhance their communication and express their opinions and feelings on a different outlet. The best place to be in is social media. People greatly value these exchanges, and staying connected with other people online has almost become mandatory to every teenager nowadays. Aside from using social media to talk to their friends and family, these channels are also means to pass school notes and assign academic tasks. So, what are the social channel platforms most liked by teenagers today? WhatsApp Some would say that Facebook is where most teenagers hang out and communicate. Facebook Facebook, as many people know, is a social network where users can sign up for free, set up a personalized profile, and connect with friends and family.

Snapchat Another extremely popular messaging app is Snapchat. Youtube. WebWise - What are social networking sites? What's the point of Snapchat and how does it work? You've probably heard about Snapchat. 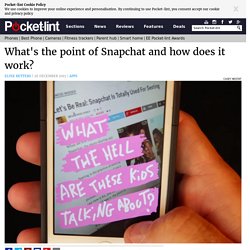 It's the popular mobile app that allows you to send videos and pictures, both of which will self destruct after a few seconds of a person viewing them. Snapchat is also a fun messaging app. You can take a photo or a video with it, then add a caption or doodle or lens graphic over top, and send it to a friend. Alternatively, you can add it to your "story", a 24-hour collection of your photos and videos, which you broadcast to the world or just your followers. Those things are part of the various features within Snapchat. They can't seem to understand why someone would actually want to send brief pictures or videos to friends, especially if they can't be saved.

If you'd like to learn all about Snapchat and how it works, keep reading. Snapchat is a photo- and video-messaging app. Due to the instant popularity of Snapchat, Facebook reportedly offered to acquire Snapchat for $3 billion. Everyone uses Snapchat. Snapchatters: Snapchat users Main screen Yes. Teens react to giving up social media for a week. Future - Is social media bad for you? The evidence and the unknowns. #LikeMinded A special series about social media and well-being This month, BBC Future is exploring social media’s impact on mental health and well-being – and seeking solutions for a happier, healthier experience on these platforms. 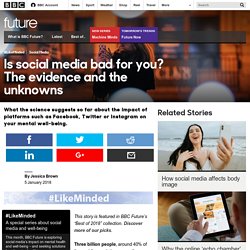 Stay tuned for more stories, coming soon… Share your tips for a happy life on social media with the hashtag #LikeMinded on Facebook, Twitter and Instagram. This story is featured in BBC Future’s “Best of 2018” collection. Three billion people, around 40% of the world’s population, use online social media – and we’re spending an average of two hours every day sharing, liking, tweeting and updating on these platforms, according to some reports. How social media is affecting teens. Dos and Don'ts when using social networks. Snapchat introduces new feature called 'Snap Map' SNAP MAP DANGER.

Facemoods' Online Safety Kit - Little Red Riding Mood. Future - How to stay happy and healthy on social media. Cyber Bullying : Create No Hate. Five ways to spot fake news. Cyberbullying: What Should and Shouldn’t Be Done. What is cyberbullying and how to defend against it? Snap Map dangers. Cyberbullying ‘common threat’ for children, says EU rights agency - MaltaToday.com.mt. CyberBullying. 6 Types of Cyberbullying. What Is Cyberbullying? 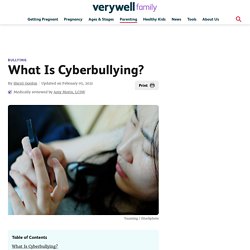 When a young person uses the Internet or technology to harass, threaten, embarrass, or target another person, this person is called a cyberbully.1 Typically, cyberbullying involves tweens and teens; but it's not uncommon for adults to experience cyberbullying and public shaming as well. Compared to traditional bullying, the effects of cyberbullying are often more significant. Not only do the hurtful messages reach an unlimited audience, but the words and images are often preserved online.2 Even if someone deletes a mean post, chances are it's still available in some form such as in a screenshot or a shared text message. Worse yet, those targeted by cyberbullies often don't know who is bullying them, so they often have no way to bring it to an end.

Types of Cyberbullying Teens are online now more than ever. In fact, texting and using social media is one of the top ways kids communicate with others. Harassment Harassing someone is a common method of online bullying. Stop Cyberbullying.