Discussion Guide: We Should All be Feminists, Everybody Reads 2019. In We Should All Be Feminists, Chimamanda Ngozi Adichie offers readers a unique definition of feminism for the 21st century, one rooted in inclusion and awareness. 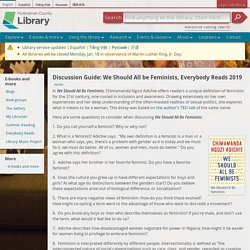 The Iron Lady – movies resource. Engage with culture without disengaging your faith. 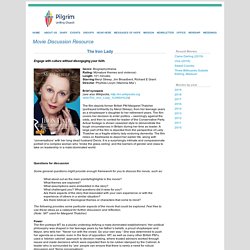 Genre: Biography/dramaRating: M(mature themes and violence)Length: 101 minutesStarring Meryl Streep, Jim Broadbent, Richard E GrantDirector: Phyllida Lloyd (‘Mamma Mia’) Brief synopsis(see also Wikipedia, The film depicts former British PM Margaret Thatcher (portrayed brilliantly by Meryl Streep), from her teenage years as a shopkeeper’s daughter to her retirement years. The film covers her decision to enter politics – seemingly against the odds, and then to contest for leader of the Conservative Party. Actual footage is shown newsreel style to demonstrate the tough circumstances in Britain during her time as leader.

Questions for discussion Some general questions might provide enough framework for you to discuss the movie, such as: What stood out as the main points/highlights in the movie? Teaching ‘Frankenstein’ With The New York Times. Two hundred years ago this June, 19-year-old Mary Wollstonecraft Shelley sat in a hotel on Lake Geneva in Switzerland, in a relentless cold rain caused by bizarre weather from a massive volcanic eruption half a world away. 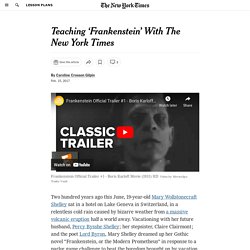 Vacationing with her future husband, Percy Bysshe Shelley; her stepsister, Claire Clairmont; and the poet Lord Byron, Mary Shelley dreamed up her Gothic novel “Frankenstein, or the Modern Prometheus” in response to a parlor game challenge to beat the boredom brought on by vacation cabin fever. In the two centuries since, the novel has been taught worldwide, adapted into every possible art form, infused into popular culture and used to kick-start conversations on themes ranging from religion to law, from science to art. What Is Expository Writing? Expository writing is used to convey factual information (as opposed to creative writing, such as fiction). 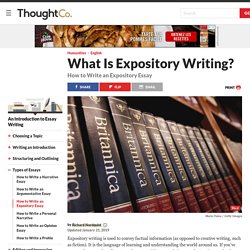 It is the language of learning and understanding the world around us. If you've ever read an encyclopedia entry, a how-to article on a website, or a chapter in a textbook, then you've encountered examples of expository writing. Key Takeaways: Expository Writing Just the facts, M'am: Expository writing is informational, not creative writing.Anytime you write to describe or explain, you use expository writing.Use a logical flow when planning an expository essay, report, or article: introduction, body text, and conclusion.It's often easier to write the body of your article first, before composing the introduction or conclusion.

Expository writing is everywhere in everyday life, not just academic settings, as it's present anytime there's information to be conveyed. Types of Expository Writing. Informative Speech Example. How to Write an A+ Comparison Essay on any Topic. Published 3/10/2013 What is a Comparison Essay? 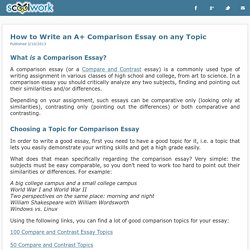 A comparison essay (or a Compare and Contrast essay) is a commonly used type of writing assignment in various classes of high school and college, from art to science. British Council LearnEnglish. Blood and Earth. 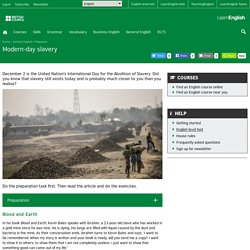 What is modern slavery? - Anti-Slavery International. Slavery did not end with abolition in the 19th century. 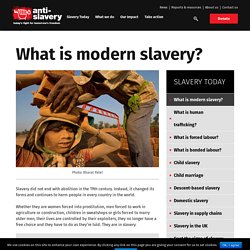 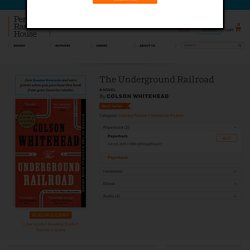 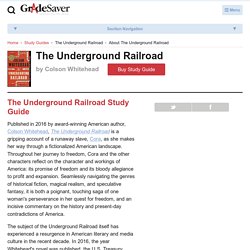 Throughout her journey to freedom, Cora and the other characters reflect on the character and workings of America: its promise of freedom and its bloody allegiance to profit and expansion. Seamlessly navigating the genres of historical fiction, magical realism, and speculative fantasy, it is both a poignant, touching saga of one woman's perseverance in her quest for freedom, and an incisive commentary on the history and present-day contradictions of America. The subject of the Underground Railroad itself has experienced a resurgence in American literary and media culture in the recent decade. The Underground Railroad by Colson Whitehead - The Undergroud Railroad Discussion Guide - LibGuides at Ramapo Catskill Library System. 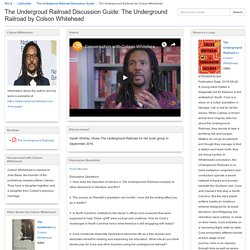 If you speak just one language, would you like to learn another? With a partner, share your language knowledge and then discuss the pros and cons of knowing — or not knowing — more than one language for speaking, writing and listening. Questions for Comprehension and Analysis. Scott Peeples: Why should you read Edgar Allan Poe? Formal & Informal English. How to use rhetoric to get what you want - Camille A.

Aristotle, the student of Plato, taught first in Plato’s Academy and then tutored Alexander the Great, and finally established his Athenian philosophical school the Lyceum. The Lyceum is an amazing place to visit. Rhetoric 101: The art of persuasive speech. 5 tips to improve your writing. Carol Dweck: The power of believing that you can improve. We should all be feminists - Chimamanda Ngozi Adichie at TEDxEuston. Mr Smedjeback's English Class.

Present a classical author or a modern author (from an English speaking country) orally. You should present personal information about the author and his/her literary work. Say something about which genre the author is writing in (for example detective novels, crime, romantic etc).