Small Change. What Is the Social in Social Media? - Journal #40 December 2012. Headlines, 2012: “Next time you’re hiring, forget personality tests, just check out the applicant’s Facebook profile instead.” – “Stephanie Watanabe spent nearly four hours Thursday night unfriending about 700 of her Facebook friends—and she isn’t done yet” – “Facebook apology or jail time: Ohio man gets to choose” – “Study: Facebook users getting less friendly” – “Women tend to have stronger feelings regarding who has access to their personal information” (Mary Madden) – “All dressed up and no place to go” (Wall Street Journal) – “I’m making more of an effort to be social these days, because I don’t want to be alone, and I want to meet people” (Cindy Sherman) – “30 percent posted updates that met the American Psychiatric Association’s criteria for a symptom of depression, reporting feelings of worthlessness or hopelessness, insomnia or sleeping too much, and difficulty concentrating” – Control your patients: “Do you hire someone in the clinic to look at Facebook all day?” 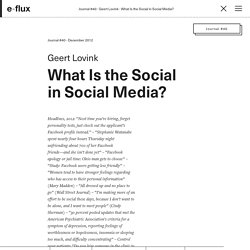 Dr. Slavoj Žižek · Trouble in Paradise: The Global Protest · LRB 18 July 2013. In his early writings, Marx described the German situation as one in which the only answer to particular problems was the universal solution: global revolution. 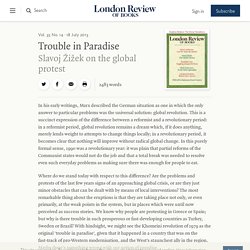 This is a succinct expression of the difference between a reformist and a revolutionary period: in a reformist period, global revolution remains a dream which, if it does anything, merely lends weight to attempts to change things locally; in a revolutionary period, it becomes clear that nothing will improve without radical global change. In this purely formal sense, 1990 was a revolutionary year: it was plain that partial reforms of the Communist states would not do the job and that a total break was needed to resolve even such everyday problems as making sure there was enough for people to eat.

Where do we stand today with respect to this difference? Why fear the Arab revolutionary spirit? What cannot but strike the eye in the revolts in Tunisia and Egypt is the conspicuous absence of Muslim fundamentalism. 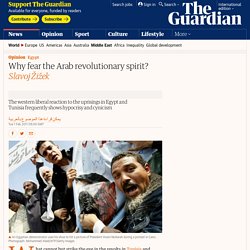 In the best secular democratic tradition, people simply revolted against an oppressive regime, its corruption and poverty, and demanded freedom and economic hope. The cynical wisdom of western liberals, according to which, in Arab countries, genuine democratic sense is limited to narrow liberal elites while the vast majority can only be mobilised through religious fundamentalism or nationalism, has been proven wrong.

The big question is what will happen next? View of #digitalactivism: New media and political protest. Why In-Person Protests Are Stronger Than Online Activism. One of the single greatest factors in learning to trust and rely on one’s neighbors is a community’s walkability. 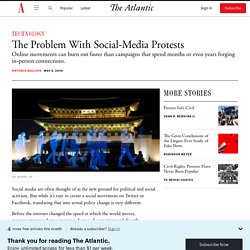 The everyday dynamics that walkable neighborhoods provide also ensure the regular connections to the rest of humanity that each of us desperately needs. These interactions can be small, often almost inconsequential (that borrowed cup of sugar, say), but our brains have evolved to look for our tribes, our communities, and our neighbors to remind ourselves that we’re not alone. Alain Badiou: The Event. Badiou's theory of the Event is the lynchpin of his influential, but controversial, theory of revolutionary politics. 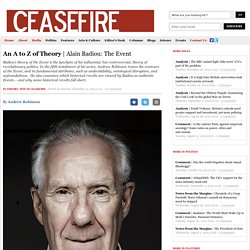 In the fifth instalment of his series, Andrew Robinson traces the contours of the Event, and its fundamental attributes, such as undecidability, ontological disruption, and unfoundedness. He also examines which historical revolts are viewed by Badiou as authentic Events – and why some historical revolts fall short. By Andrew Robinson. Alain Badiou on the Egyptian revolution: questions of the movement and its vision [video]

“Rules of the revolutionary square in Tahrir” Photo by Mosa'ab Elshamy, Tahrir Square, 2011. 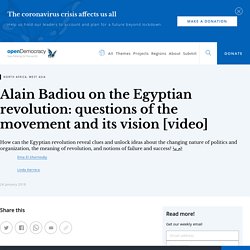 All rights reserved. The Times They Keep A-Changin' When this essay was first written for the Alvin Fine Memorial Lecture at San Francisco State University in April 1985, I was not fully aware of how much the times had already changed since I wrote The Making of a Counter Culture in 1969. But I soon learned. A few weeks before the lecture, a student in the Public Affairs Office at San Francisco State called me to arrange some campus publicity. How the 1960s counterculture created Silicon Valley. Steve Jobs was influenced by an important counterculture and computing periodical.

San Francisco went from hippie haven to technological hub in the years that followed the 1960s. The Homebrew Computer Club was founded by a draft resister and spawned dozens of tech companies. There is a lot of confused historical misrepresentation when it comes to the 1960s counterculture. Far from being just a populist barefoot romp in the hippie mud, the 1960s was one of the most transformational time periods we've ever experienced. Characterized by a continuation of 1950s beatnik and Buddhist sensibilities, bohemian experiments in alternative ways of life, psychedelic experiences and an anarchist anti-authority bent, the sixties had it all. There is much more to this era than the minimal fodder that is dolled out as counterculture history to the populace usually served in weak pop-song aphorisms and fading tie-dye shirts. He also came across a startling connection later on in his years. .. The Complicated Legacy of Stewart Brand’s “Whole Earth Catalog” 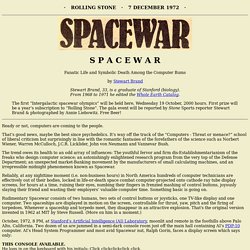 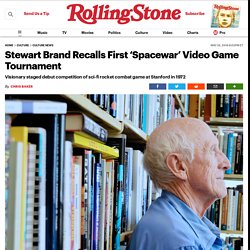 Competitors gathered at the Stanford Artificial Intelligence Lab in Los Altos, California to do battle in the sci-fi rocket combat game Spacewar. Stewart Brand and the Whole Earth Catalog, the book that changed the world. Stewart Brand didn't just happen to be around when the personal computer came into being; he's the one who put "personal" and "computer" together in the same sentence and introduced the concept to the world. Howsocialmediafacilitatespoliticalprotest Informationmotivationandsocialnetworks.

The Impact of Social Media on Modern Protest Movements & Democracy. Social Media Made the Arab Spring, But Couldn't Save It. Five years ago this week, massive protests toppled Egyptian President Hosni Mubarak, marking the height of the Arab Spring. Empowered by access to social media sites like Twitter, YouTube and Facebook, protesters organized across the Middle East, starting in December 2010 in Tunisia, and gathered together to speak out against oppression, inspiring hope for a better, more democratic future. Social Media and the Arab Spring.