Chemistry / Overview of Mr. Morris. Chemistry PowerPoint Lessons, Handouts, Labs, and Worksheets. Chemmybear.com. Woodridge High School. Chemistry: Chemistry’s three main goals are (1) to provide a deep and broad introduction to chemistry concepts and skills, (2) to prepare students for further study of chemistry, such as a first year college chemistry class or AP class, and (3) to challenge every student, including those not usually challenged by their coursework. 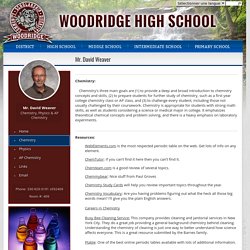 Chemistry is appropriate for students with strong math skills, as well as students considering a science or medical major in college. It emphasizes theoretical chemical concepts and problem solving, and there is a heavy emphasis on laboratory experiments. Resources: WebElements.com is the most respected periodic table on the web. ChemTutor: if you can't find it here then you can't find it. Chemistry Vocabulary: Are you having problems figuring out what the heck all those big words mean? Physical Science - Mrs. Kroutil's Science Classes. 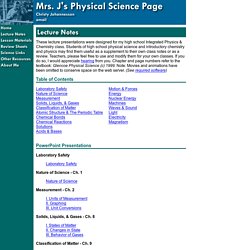 Students of high school physical science and introductory chemistry and physics may find them useful as a supplement to their own class notes or as a review. Teachers, please feel free to use and modify them for your own classes. If you do so, I would appreciate hearing from you. Chapter and page numbers refer to the textbook: Glencoe Physical Science (c) 1999. Note: Movies and animations have been omitted to conserve space on the web server.

Chemistry & Physics. Streaming In addition to watching the videos in this site, Georgia teachers and students can stream Chemistry: A Study of Matter and Physics Fundamentals from GPB Education Streaming by plugging in the search term 'GPB Classroom' and select an episode to stream live or download. 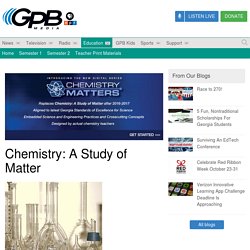 You may also stream the videos through PBS Learning Media by searching for Chemistry & Physics. Chemistry & Physics consists of two series teaching high school college preparatory chemistry and physics. Chemistry: A Study of Matter and Physics Fundamentals provides instructional content delivered through thirty-minute episodes and integrated classroom materials. Episodes provide content while giving cues for the classroom teacher to pause the program and interact with students, engaging them in discussions, problem-solving, and laboratory activities. For each unit, daily lesson plans are given to help teachers prepare for and pace the lessons. 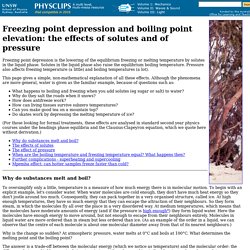 Solutes in the liquid phase also raise the equilibrium boiling temperature. Pressure also affects freezing temperature (a little) and boiling temperatures (a lot). This page gives a simple, non-mathematical explanation of all these effects. Although the phenomena are more general, water is given as the familiar example, because of questions such as: What happens to boiling and freezing when you add solutes (eg sugar or salt) to water? Why do substances melt and boil? To oversimplify only a little, temperature is a measure of how much energy there is in molecular motion. Why is the change so sudden? The answer is a trade-off between the molecular energy (which we notice as temperature) and the molecular order: the difference between highly organised structure in ice, rather close packing in liquid water, and nearly complete disorganisation in steam. 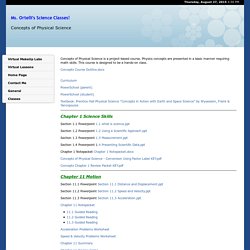 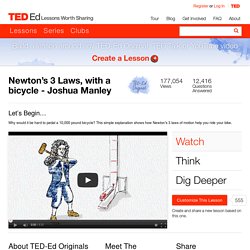 A little bit stuffy, bad hair, but quite an intelligent guy. He worked on developing both calculus and physics at the same time. In his work, he came up with the three basic ideas that we still use to describe the physics of motion (up to a point). The ideas have been tested and verified so many times over the years that scientists now call them Newton's Three Laws of Motion. It is helpful when describing forces acting on an object to label their direction. Draw a vector diagram of a bicycle being pedaled and label all of the forces which act on it. Bicycle with thick tires, like mountain bikes, tend to go slower than bicycles with thin tires, like road bikes, when you apply the same amount of force, even if the bicycles are the same weight. According the the conservation of energy theory, energy cannot be created or destroyed.