Wait For It...The Mongols!: Crash Course World History #17. What Genghis Khan's Mongolian Sounded Like - and how we know. Mongolic: meet a language family, including Para-Mongolic. Nomads of Mongolia. How a Young Eagle Huntress Kicks Butt at a Kazakh Tradition. When Mongolia closed its borders earlier this year due to the pandemic, Marinel de Jesus was organizing an all-female trip there and filming the annual winter migration of nomadic families in the Altai Mountains. 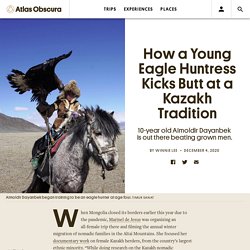 She focused her documentary work on female Kazakh herders, from the country’s largest ethnic minority. “While doing research on the Kazakh nomadic migrations, I quickly learned that most of the articles or films about the subject involve merely the voices of local males or male explorers. This particular narrative is devoid of female perspectives and voices,” writes de Jesus in an email. “I discovered that my suspicion was right all along—women were the leaders of nomadic migrations in the past.”

She also observed that some female Kazakh nomads participated in traditional eagle hunting, in which a trained raptor is used to help catch foxes or hares. Do you know what inspired Aimoldir Dayanbek to become an eagle huntress? How was she trained to compete at such a young age? COVID Underdogs: Mongolia - Indi Samarajiva - Medium. After 9 Months Of Competition And More Than 130,000 Submissions, Here Are The Most Breathtaking Pics Taken This Year (50 Pics)

Mongolian Heavy Metal Band Gets Millions Of YouTube Views : Goats and Soda. A band from Mongolia that blends the screaming guitars of heavy metal and traditional Mongolian guttural singing has picked up 7 million views for its two videos. 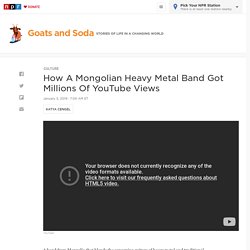 Leather jackets, skull rings and bandannas alongside intricately carved Mongolian horsehead fiddles are just some of the images in the first two music videos the Mongolian band The Hu released on YouTube this fall. Excited listeners from around the globe have posted comments like: "This makes me want to ride a horse and shoot people with a bow" and "This sounds like ancient mongol rock of 1000 b.c. Really badass! " (sic) And yet what The Hu is doing, while new, comes out of a tradition that began several decades ago when Mongolia transitioned from a satellite of the Soviet Union to a democracy. It is something they continue to do today, says Stokes, who spoke via Skype from Inner Mongolia where she is studying Mongolian hip-hop.

"So it's not rock music performed by Mongolians. They aren't quite sure how it happened. The HU - Yuve Yuve Yu. Mongolians protest against corruption as temperature plunges. Indigenous People of Siberia. Ulchi Woman. 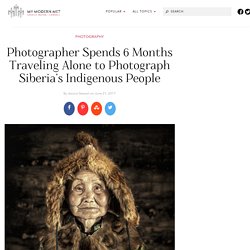 Ulchsky District, Khabarovsk Krai, Far East, Siberia. © Alexander Khimushin / The World In Faces For the past 9 years, photographer Alexander Khimushin has been traveling the world, visiting 84 different countries. Three years ago, inspired by the idea of documenting remote cultures that are slowly disappearing due to globalization, he began his The World in Faces project. Seeking out small, ethnic minority groups around the world, Khimushin shoots incredible portraits that both honor and immortalize their culture. China Fences In Its Nomads, and an Ancient Life Withers. Photo MADOI, China — If modern material comforts are the measure of success, then Gere, a 59-year-old former yak-and-sheep herder in China’s western Qinghai Province, should be a happy man. 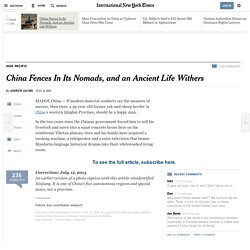 In the two years since the Chinese government forced him to sell his livestock and move into a squat concrete house here on the windswept Tibetan plateau, Gere and his family have acquired a washing machine, a refrigerator and a color television that beams Mandarin-language historical dramas into their whitewashed living room. But Gere, who like many Tibetans uses a single name, is filled with regret. 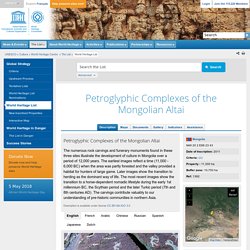 The earliest images reflect a time (11,000 - 6,000 BC) when the area was partly forested and the valley provided a habitat for hunters of large game. Mongolia (Documentary) I Have Seen the Earth Change. Nomads family in hogno khaan nature reserve in mongolia. Mongolia by Motorbike. How Mongolia went wild for opera. Last summer, a video from Cardiff went viral in Ulaanbaatar, the capital of Mongolia. 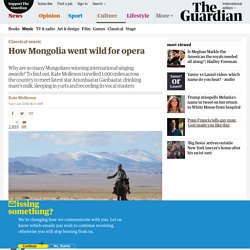 It showed opera coach Mary King moist-eyed during the finals of BBC Cardiff Singer of the World. Who had moved her to tears? Mongolian baritone Ariunbaatar Ganbaatar. Towering, broad-shouldered, with a huge smile and a mighty voice, the 29-year-old sang Rossini, Verdi and Tchaikovsky – and charmed everyone, including the judges, who declared him joint winner of the coveted Song prize.

“There was something so imposing about the sound,” King said. Ariunbaatar doesn’t have a typical background for a contestant in one of the world’s most prestigious opera contests. That backstory tugged at my curiosity – so much so that three months later I was on a flight to Ulaanbaatar with a radio producer and suitcase of audio equipment.

Mongolian With A Vision Hopes To Make Green Tribal Tents To Help Fight Dangerous Pollution : Goats and Soda. Odgerel Gamsukh has a started a company to create a green community in the unplanned and polluted sprawl outside of Ulaanbaatar. 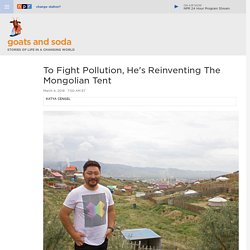 Katya Cengel for NPR hide caption toggle caption. Mongolia's Women Are Better Educated Than The Men — But Still Must Fight For Equality : Goats and Soda. Gerelee Odonchimed, vice director of Women for Change, modeled for this half-nude photo. 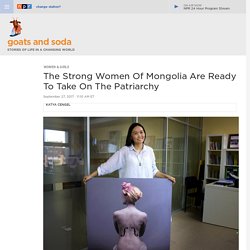 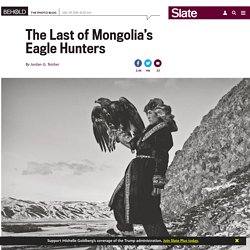 In the winter, temperatures dip to negative 40 degrees. Only the toughest survive. This is where the world’s 60 or so remaining burkitshi—Kazakh men who hunt on horseback with golden eagles—carry on a centuries-old tradition. Palani Mohan had longed to document the burkitshi since he was 17, when, as an apprentice photographer at the Sydney Morning Herald, he saw a photo of one in a British newspaper. Dukha Reindeer people of Mongolia. Through his photos of the nomadic Dukha people in northern Mongolia, photographer and scholar Hamid Sardar-Afkhami gives us an unprecedented look into the everyday lives of a people that rely on herds of migrating reindeer for their day-to-day existence. 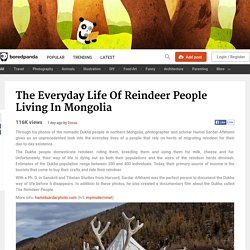 The Dukha people domesticate reindeer, riding them, breeding them and using them for milk, cheese and fur. Mongolian method - save orphaned camel calves may soon be lost 2 clicks. Springtime in the Gobi is as life-giving as it is treacherous. As the -45-degree lows of winter yield to 100-degree summertime highs, the traditional livestock of the area’s Mongolian herders start to give birth. Risks are many. Shaggy Bactrian camels (two humps!) Are pregnant for 13 months, and usually give birth to a calf every second year. But the harsh, dusty climate is unforgiving, and it is not uncommon for mother or baby to perish during or after delivery. After centuries in the desert, the nomadic herders have developed a unique musical ritual to help form these bonds, or reestablish one when a camel mother has rejected her own offspring. At first, observers say, the mother either ignores the calf altogether or lashes out by biting or spitting at it.

Meet The Tsaatan Nomads In Mongolia. Tsaatan people are reindeer herders and live in northern Khövsgöl Aimag of Mongolia. Originally from across the border in what is now the Tuva Republic of Russia, the Tsaatan are one of the last groups of nomadic reindeer herders in the world. They survived for thousands of years inhabiting the remotest subarctic Ulaan taïga, moving between 5 and 10 times a year. The reindeer and the Tsaatan people are dependent on one another. Some Tsaatan say that if the reindeers disappear, so too will their culture. Reindeers provide them with milk, cheese, meat, and transportation. Inside the Rugged Lives of Mongolia’s Nomads.

Photos Of Mongolian Tribe Show Deep Bond With Animals. The Dukha tribe from Mongolia are one of the few remaining “lost” tribes that have completely escaped the realities of the modern world. They are best known as reindeer herders, but their connection with the animal world goes beyond reindeer. The magical photographs were taken by Hamid Sardar Afkhami who travelled to Khovsgol, Mongolia to photograph one of the few Dukha families that remain.

Traditional music of the Tsuur. Buriat Song - Live at the Kennedy Center in Washington.