A 100-Year-Old Holocaust Survivor on How Books Save Lives. Cake Ösa+ Electric Utility Bike. Cake, the Swedish outfit behind the KALK e-bike has just released its latest fully-electric two-wheeled offering with the highly-utilitarian Ösa+. 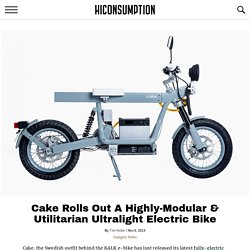 Unlike the performance-oriented KALK (and road-legal KALK+), the new model was engineered to be as versatile and modular as possible, enabling riders to tailor their Ösa+ however they see fit. The company is also offering a range of bolt-on accessories and racks for the new model to further bolster its multifaceted nature. Constructed around an extruded, forged, machined, and welded 6061 aluminum frame that uses a clamp system to accept a myriad of different attachments and can literally act as a mobile workbench/station. The Ösa+ forgoes its off-road-focused predecessor’s top-shelf Öhlins forks in favor of more economical — albeit still inverted — items. The 14-inch wheels were designed and produced in house by Cake, and are laced up with 220mm discs bit by four-pot calipers front and back. Here Are the Urban Highways That Deserve to Die.

Replacing I-980 with a surface boulevard could bridge the gap between Oakland's neighborhoods. 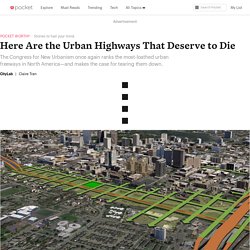 Image from ConnectOAKLAND, for the Congress for New Urbanism. On one side of Interstate 980 in Oakland rise the new glass skyscrapers of the city’s Uptown neighborhood, home to a bustling entertainment district and Silicon Valley’s spillover tech startups. On the other lies West Oakland, a “food desert” where two-thirds of residents live below the poverty line. Građansko samoorganizovanje – iznuđena samoodbrana. The Game of Life: Visualizing China's Social Credit System. In an attempt to imbue trust, China has announced a plan to implement a national ranking system for its citizens and companies. 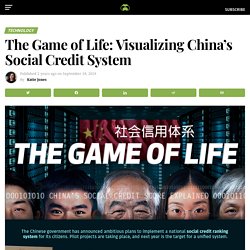 Currently in pilot mode, the new system will be rolled out in 2020, and go through numerous iterations before becoming official. While the system may be a useful tool for China to manage its growing 1.4 billion population, it has triggered global concerns around the ethics of big data, and whether the system is a breach of fundamental human rights. Why speaking to yourself in the third person makes you wiser. A worrying change in Open Source perception. Open Source is an excellent idea. 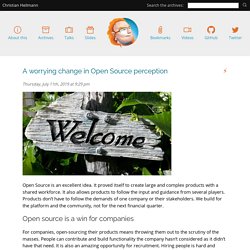 It proved itself to create large and complex products with a shared workforce. It also allows products to follow the input and guidance from several players. Why speaking to yourself in the third person makes you wiser. You have more in common with a psychopath than you realise. Psychopath. 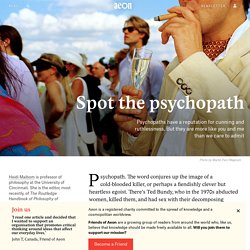 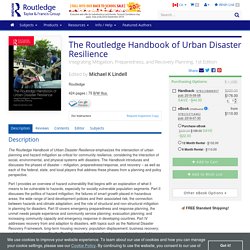 The Handbook introduces and discusses the phases of disaster – mitigation, preparedness/response, and recovery – as well as each of the federal, state, and local players that address these phases from a planning and policy perspective. Part I provides an overview of hazard vulnerability that begins with an explanation of what it means to be vulnerable to hazards, especially for socially vulnerable population segments. Part II discusses the politics of hazard mitigation; the failures of smart growth placed in hazardous areas; the wide range of land development policies and their associated risk; the connection between hazards and climate adaptation; and the role of structural and non-structural mitigation in planning for disasters. 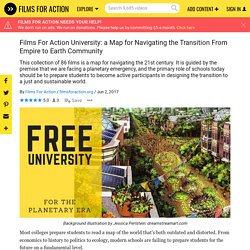 From economics to history to politics to ecology, modern schools are failing to prepare students for the future on a fundamental level. To put it simply, most colleges are still running on a set of assumptions that were developed during the 20th century. These assumptions are largely invisible to us - they are part of our subconscious "story of humanity" - but they ultimately constitute the heart of our societal crisis. The most simple of these is the premise that things will go on as they have before - that we can just get a job, do our part to grow the economy (progress!) (5) Spanish Community Living in Harmony with Nature. Ad for Du Pont cellophane, circa 1955 [946 × 1200] : AdPorn. Donald Trump, Narcissism and Diagnosis as Political Sport. The consensus as to Donald Trump's psychiatric issues is nearly unanimous. 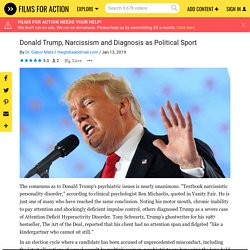 "Textbook narcissistic personality disorder," according to clinical psychologist Ben Michaelis, quoted in Vanity Fair. He is just one of many who have reached the same conclusion. Noting his motor mouth, chronic inability to pay attention and shockingly deficient impulse control, others diagnosed Trump as a severe case of Attention Deficit Hyperactivity Disorder. The Invention of Capitalism: How a Self-Sufficient Peasantry was Whipped Into Industrial Wage Slaves. “…everyone but an idiot knows that the lower classes must be kept poor, or they will never be industrious.” 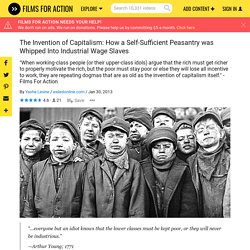 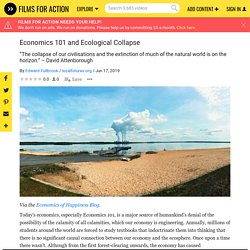 Today’s economics, especially Economics 101, is a major source of humankind’s denial of the possibility of the calamity of all calamities, which our economy is engineering. Annually, millions of students around the world are forced to study textbooks that indoctrinate them into thinking that there is no significant causal connection between our economy and the ecosphere. Once upon a time there wasn’t. Although from the first forest-clearing onwards, the economy has caused environmental damage and at an increasing rate, it was only in the 19th century – when the economy began the big switch away from muscle energy – that it began to acquire the means to cause lethal damage to the ecosphere. It has now been over half a century since the natural sciences began to discover that the economy was causing fundamental and irreversible changes to the ecosphere by which we and the economy exist. America's first urban 'agrihood' feeds 2,000 households for free.

When you think of Detroit, ‘sustainable‘ and ‘agriculture‘ may not be the first two words that you think of. But a new urban agrihood debuted by The Michigan Urban Farming Initiative (MUFI) might change your mind. The three-acre development boasts a two-acre garden, a fruit orchard with 200 trees, and a sensory garden for kids. If you need a refresher on the definition of agrihood, MUFI describes it as an alternative neighborhood growth model. An agrihood centers around urban agriculture, and MUFI offers fresh, local produce to around 2,000 households for free. Related: Amazing farm-to-table, eco friendly housing development in California is a locavore’s paradise In a statement, MUFI co-founder and president Tyson Gersh said, “Over the last four years, we’ve grown from an urban garden that provides fresh produce for our residents to a diverse, agricultural campus that has helped sustain the neighborhood, attracted new residents and area investment.

. ” + The Michigan Urban Farming Initiative. Permaculture and Community: LILAC Green Cohousing. Commons Network. Commons Network. 10 Reasons Why Your Food Shouldn't be the Only Thing That's Sustainable - Small Box Energy. Aperçu du WordPress adaptatif #76333. Aperçu du WordPress #73652. Capital - Gardening could be the hobby that helps you live to 100. How to Design Our Neighborhoods for Happiness by Jay Walljasper. Biology is destiny, declared Sigmund Freud. But if Freud were around today, he might say “design is destiny”—especially after taking a stroll through most modern cities. The way we design our communities plays a huge role in how we experience our lives.

The way we design our communities plays a huge role in how we experience our lives. Coding for kids, teens and creative adults. Ратни ветеран који се полио бензином и запалио, преминуо од опекотина · Hronograf.net. Google AMP lowered our page speed, and there's no choice but to use it - unlike kinds. Why Society Is Addicted To Control And What We Can Do About It - Sustainable Human. Savski rukavac bio je DEPONIJA U VODI. A onda je jedan Beograđanin pozvao prijatelje i prolaznike i SVE SU SREDILI ZA DAN. Alternatives & Resources - ethical.net.