Best Friends Build Their Own Tiny Town So They Can Retire And Grow Old Together. Four couples decided to build their perfect “getaway” in good ol’ Texas. 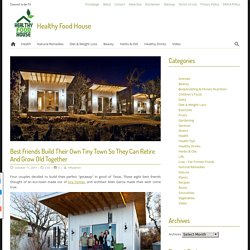 These eight best friends thought of an eco-town made out of tiny homes, and architect Matt Garcia made their wish come true. The cabins, facing the Llano river outside of Austin, Texas, cost around $40,000 each and are environmental-friendly and sustainable. The couples plan to retire on the property and they named it ‘Llano Exit Strategy’. Garcia explained that the idea was to get a warm feeling that would offset the coolness of the metal on the outside. They retreat is designed to be sensitive to the limited water resources of a region locked in a drought affecting the entire state. The interiors have been made with plywood, and the slanted roofs capture up to 50,000-gallons of rainwater in large barrels or cisterns that will keep the property irrigated.

The black, granite countertop lined with steel stools and a wine rack on either side separates the kitchen from the communal dining and living room. Schadenfreude turns us into temporary psychopaths, according to a new model of the emotion. By Emma Young Schadenfreude – which literally means “harm-joy” in German – is the sense of pleasure derived from others’ misfortune. 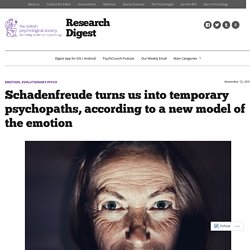 It’s a “poorly understood” emotion, according to a group of psychologists at Emory University in the US, and in their review paper in New Ideas in Psychology they propose a new “tripartite” model of schadenfreude based on the idea that deep-seated survival concerns can motivate us to see others as less than human. Esther Gokhale, BS — Restoring Our Primal Architecture. The Personality Trait Linked To Perfect Sleep. The trait can be increased using psychological exercises. 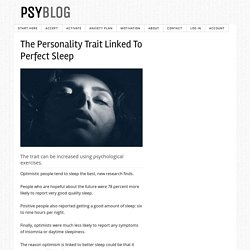 Optimistic people tend to sleep the best, new research finds. People who are hopeful about the future were 78 percent more likely to report very good quality sleep. Positive people also reported getting a good amount of sleep: six to nine hours per night. Finally, optimists were much less likely to report any symptoms of insomnia or daytime sleepiness. The reason optimism is linked to better sleep could be that it promotes positive coping.

People who cope adaptively with stress in life tend to seek support from others, eat properly, exercise regularly and anticipate stressful episodes. The good news is that optimism is not fixed in stone. Exercises such as visualising your ‘best possible self‘ have been shown to increase optimism. Inadequate sleep is linked to an increased risk of many chronic diseases, said Professor Rosalba Hernandez, the study’s first author, said: The study included 3,548 people across three large US cities. Maslow's forgotten pinnacle: Self-transcendence. A great deal of focus is paid to achieving self-actualization, the pinnacle of Abraham Maslow's hierarchy of needs.Maslow, however, didn't believe this was the real pinnacle of human development: Self-transcendence was.Maslow became ill and soon died after conceiving of this new pinnacle, which is why we hear little about it today. 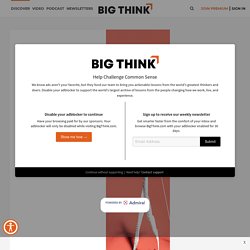 Summary of Maslow on Self-Transcendence. It is quite true that [we live] by bread alone—when there is no bread. 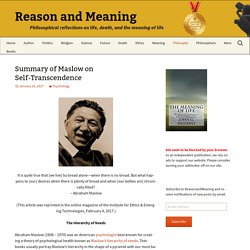 But what happens to [our] desires when there is plenty of bread and when [our bellies are] chronically filled? ~ Abraham Maslow (This article was reprinted in the online magazine of the Institute for Ethics & Emerging Technologies, February 4, 2017.) The Experience Economy - Self-Transcendence, Maslow’s Hierarchy of Needs. Maslow’s hierarchy of needs was first proposed by Abraham Maslow in his 1943 paper “A Theory of Human Motivation” in Psychological Review and later fully expressed in his 1954 book Motivation and Personality. 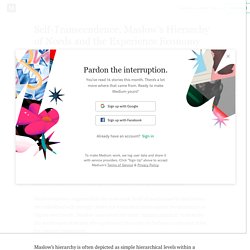 This hierarchy is a popular framework in sociology research and management training. Maslow’s theory suggests that the most basic level of needs must be met before the individual will strongly desire (or focus motivation upon) the secondary or higher-level needs. Maslow also coined the term “metamotivation” to describe the motivation of people who go beyond the scope of the basic needs and strive for constant betterment. Maslow’s hierarchy is often depicted as simple hierarchical levels within a pyramid which is easier to understand but doesn’t really represent that many different motivations from various levels can occur at the same time. Physiological needs include air, water, food, sleep, clothing and shelter Belonging and love needs include friendship, intimacy and family.

What is Self-Transcendence? Definition and 6 Examples (+PDF) Self-transcendence: it’s a term you’ve probably heard before. 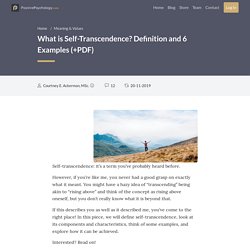 However, if you’re like me, you never had a good grasp on exactly what it meant. You might have a hazy idea of “transcending” being akin to “rising above” and think of the concept as rising above oneself, but you don’t really know what it is beyond that. If this describes you as well as it described me, you’ve come to the right place! Architecture, art and design - 100 years of the Bauhaus (1/3) Architectural Standard - Ernst & Peter Neufert - Architects' Data : Free Download, Borrow, and Streaming.