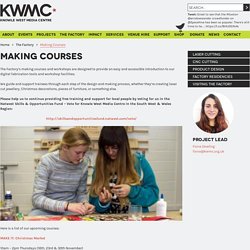 We guide and support trainees through each step of the design and making process, whether they’re creating laser cut jewellery, Christmas decorations, pieces of furniture, or something else. Please help us to continue providing free training and support for local people by voting for us in the Natwest Skills & Opportunities Fund – Vote for Knowle West Media Centre in the South West & Wales Region: Here is a list of our upcoming courses: MAKE IT: Christmas Market 10am – 2pm Thursdays (16th, 23rd & 30th November) Éilis Kirby ‹ People ‹ Spike Island. Éilis Kirby was born in Newport, Rhode Island and moved to the UK in 1988. 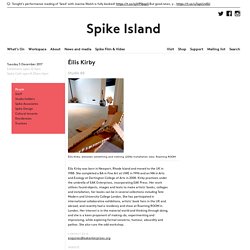 She completed a BA in Fine Art at UWE in 1996 and an MA in Arts and Ecology at Dartington College of Arts in 2008. Kirby practices under the umbrella of EAK Enterprises, incorporating EAK Press. Room 13 Hareclive ‹ People ‹ Spike Island. Room 13 Hareclive is an independent artists’ studio run by the young people who use it, based within the grounds of Hareclive Primary School, south Bristol and part of an international network of studios. 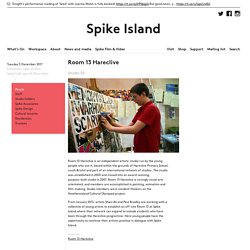 The studio was established in 2003 and moved into an award-winning, purpose-built studio in 2007. Room 13 Hareclive is strongly visual arts orientated, and members are accomplished in painting, animation and film-making. Studio members were resident thinkers on the Nowhereisland Cultural Olympiad project. From January 2013, artists Shani Ali and Paul Bradley are working with a collective of young artists to establish an off-site Room 13 at Spike Island where their network can expand to include students who have been through the Hareclive programme. Here young people have the opportunity to continue their artistic practice in dialogue with Spike Island. 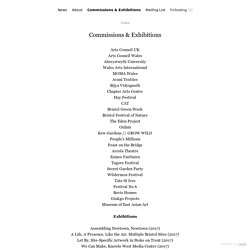 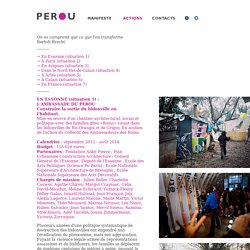 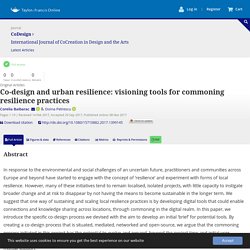 Introduction Positing that ‘commoning’ resilience practices is a necessary step in the process of achieving greater urban resilience; this paper introduces a co-design process, aimed at defining a set of digital tools that could enable connectivity and exchanges between presently dispersed resilience initiatives. In order to identify potential tools, the co-design process involves potential users (i.e. practitioners and communities who have a key role in driving such initiatives) in defining the types of local knowledge produced and the kinds of capacities needed in order to advance their resilience practices. Furthermore, we argue that co-designing tools with some of those for whom they are intended (potential users) and allowing the process to be open and replicable are key to ensuring the continuity and expansion of the commoning process beyond this project, our involvement as researchers and designers and the initial user base. 2. 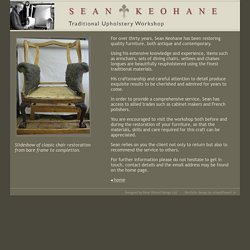 Using his extensive knowledge and experience, items such as armchairs, sets of dining chairs, settees and chaises longues are beautifully reupholstered using the finest traditional materials. His craftsmanship and careful attention to detail produce exquisite results to be cherished and admired for years to come. In order to provide a comprehensive service, Sean has access to allied trades such as cabinet makers and French polishers. Jan Gehl: “In The Last 50 Years, Architects Have Forgotten What a Good Human Scale Is” Workshop: Collaborating with Communities in Creating Their Own Spaces with the City - Festival of the Future City - Festival of the Future City. Grass-roots activities, from establishing community gardens and town greens, to street parties and community events, to collaborations with artists, students and activists, can regenerate areas and empower communities to take ownership of their own shared spaces within the city. 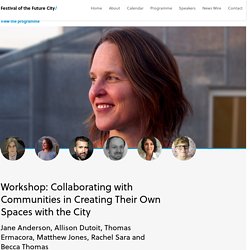 Creating connections between people and place, we help build more resilient communities for everyone. People - Gehl. BBC Radio 4 - Radio 4 in Four, Ikea hacks: personalising your own furniture. The Tiny Polish Village Filled with Flower-Painted Cottages. One abandoned farmhouse, for instance, boasts painted arrangements of blooms resembling peonies, daisies, and bluebells on every corner of its façade—shoehorned between windows, doors, and a sloping roof garnished with moss. 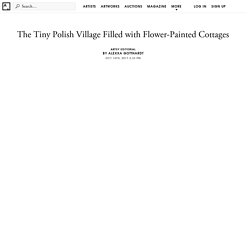 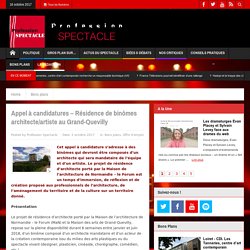 Industrial designers design new products or develop existing ones. The range of products they work with is vast and encompasses everyday items small and large, from razor blades to cars. Craft worker-maker. 9 February 2011 Craft workers are involved in making objects and implementing craft techniques. They carry out a range of activities using a variety of different materials. A craft worker/maker may use traditional skills in their work. They may also use more modern or innovative approaches and techniques. Craft workers/makers will either produce work in their own style, or to suit a clients commission.

3D designer-maker. Sarah Marten 13 March 2013 3D designer-makers design and make unique products, which might be one-offs for commission or made for small-scale production. What is the job like? Community art worker. 22 March 2011 Community art workers work closely with community groups to engage and involve them in arts projects. These could include: Drama and dance Visual arts – painting including murals, photography and textile art Model-making and crafts Creative writing Film and video production They may work with children, adults and those with disabilities, ensuring equal opportunities and inclusion for all sectors of the community. Community art workers often engage with excluded sections of society, including homeless people, drug and alcohol users, the unemployed and those with mental health problems.

Some projects have a particular cultural or environmental focus. Transferable skills for design. Laura Taflinger 31 January 2013 What makes a designer stand out? Furniture designer Tom Dixon believes it isn't just about good design training. He spoke about the need for transferable 'peripheral skills' in the design industry. Hybrid training in design. 8 February 2013 Jason Bruges is an interaction designer. His team create site-specific installations, set designs, lighting and architectural features. He explained why having a wide mix of skills, training and interests can help designers. "The description of what I do varies massively, depending on who I’m talking to. The work the studio does sits between architecture, art and interaction design. "My architecture friends say, ‘You’re not an architect’. Building a mix of career skills. Use Talnet for casting, job advertising, project cre... Get creative with Talnet. Creative Choices.