Every Frame a Painting. How To Read A Screenplay - Go Into The Story. If you’re serious about learning the craft, here are 7 exercises you can use to make the most of your script-reading and analysis. 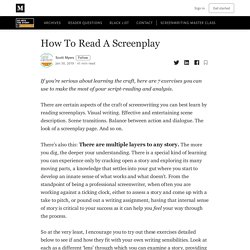 There are certain aspects of the craft of screenwriting you can best learn by reading screenplays. Visual writing. Effective and entertaining scene description. Scene transitions. Balance between action and dialogue. There’s also this: There are multiple layers to any story. So at the very least, I encourage you to try out these exercises detailed below to see if and how they fit with your own writing sensibilities. This article is not intended to train you to be a script reader, but rather to provide a set of tools for writers to dig deep into screenplays and learn as much as possible from the reading experience.

The First Pass. Lessons Learned. This ELT lesson plan is designed around a short video titled Lesson Learned by StoryCorps. 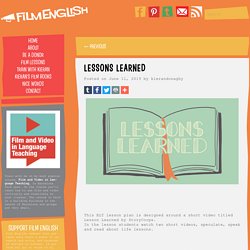 In the lesson students watch two short videos, speculate, speak and read about life lessons. I’m offering my most popular course, Film and Video in Language Teaching, in Barcelona in July and September this year. On the course you’ll learn how to use film and video critically and creatively in the language classroom. Find out more about the course and how to enrol here. Language level: Intermediate (B1) – Upper Intermediate (B2)Learner type: Teens and adultsTime: 90 minutesActivity: Watching two short videos, speaking and readingTopic: Education, racism and life lessonsLanguage: Vocabulary related to schoolMaterials: Two short videos and an online articleDownloadable materials: lessons_learned_instructions Step 1 Read out this text to your students: “Imagine you are a 14-year-old black boy called William Weaver. 50 Of The Best Screenplays To Read And Download In Every Genre. 50 of the Best Famous Movie Scripts to Read and Download In Every Genre If you’re looking for free movie scripts you’re in the right place. 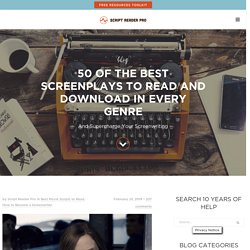 We’ve been strong advocates for the benefits of reading screenplays for a long time as it’s one of the simplest ways to learn how to write. With that in mind, we’ve put together a mega list of the fifty best screenplays to read for aspiring screenwriters. This list of the best screenplays to read is grouped into the five main genres you’ll find in Hollywood today: drama, comedy, action/adventure, thriller and horror. (We prefer to call sci-fi, western, romance, etc. sub-genres of these five and you’ll find examples of these in the lists below too.) Both “shooting” movie scripts and “spec” movie scripts are included in this list. If you haven’t yet, keep things simple by sticking to regular spec script formatting. Best Screenplays to Read: Drama 1. Boy meets girl. 2. 3. 4. 5. 6. 7. 8. 9. Free MIT Course Teaches You to Watch Movies Like a Critic: Watch Lectures from The Film Experience.

We all have our favorite film critics. 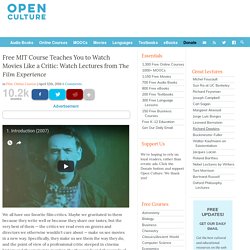 Maybe we gravitated to them because they write well or because they share our tastes, but the very best of them — the critics we read even on genres and directors we otherwise wouldn't care about — make us see movies in a new way. Specifically, they make us see them the way they do, and the point of view of a professional critic steeped in cinema history and theory (not to mention the thousands and thousands of hours of actual film they've watched) will always have a richness that the casual moviegoer can't hope to enjoy on his/her own.

Unless, of course, you take The Film Experience, a 23-lecture course from the Massachusetts Institute of Technology. And you don't need to enroll at MIT — or even show up and surreptitiously audit — to take it, since the school has made those lectures, their accompanying materials, and even supplemental media (just like the DVD extras that have inspired a generation of cinephiles) free on their OpenCourseWare site. The Language of Film: Crash Course Film History #5. Roger Ebert Lists the 10 Essential Characteristics of Noir Films - Open Culture. A Criterion Collection list of Roger Ebert’s 141 “Great Movies” includes only two films noir—The Third Man and The Killing—yet the late great critic had quite a lot to say about the genre. 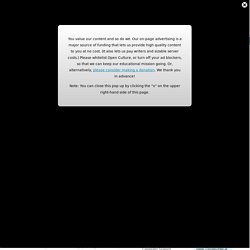 In an interview with radio show To the Best of Our Knowledge, for example, Ebert described noir films as teaching their characters a lesson: “that they’re weaker than they thought they were and they’re capable of evil that they didn’t think they could commit.” His deeply philosophical discussion will draw you into the nihilistic abyss at the heart of noir. And yet many of his reviews of such films comment as much on surfaces as depths.

For all their psychological brutality, noir films were nothing if not stylish. Ebert’s enthusiastic review of 2005 neo-noir Sin City, for example, calls it a movie “not about narrative but about style… a comic book brought to life and pumped with steroids.” 1.