Every Frame a Painting 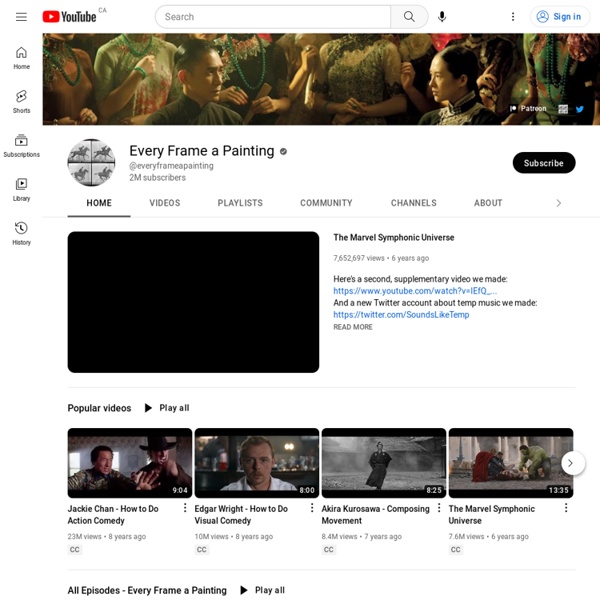 Institute of Critical Zoologists "The work to follow is an exploration of these complexities and reminds us that birds occupy a large and central part of that universe that human beings constantly carve out of nature." Ding Li “In contemporary society birds are, perhaps, both the most watched and most eaten animal on our planet. They have become a focal point of debates about a 'proper' relationship between humankind and nature, and about definitions of humanity itself.” Naoko Noguchi Against the very real environmental drama unfolding across the globe, multidisciplinary artist Renhui Zhao presents the exhibition A Bird in the Hand. How To Read A Screenplay - Go Into The Story If you’re serious about learning the craft, here are 7 exercises you can use to make the most of your script-reading and analysis. There are certain aspects of the craft of screenwriting you can best learn by reading screenplays. Visual writing. Effective and entertaining scene description.

62 of the Best Documentaries of All Time William Greaves’s multilayered metafiction—based on a scripted scene of a couple in crisis—is a documentary about the very nature of fictional films, and the authority of a director trying to make them. Greaves films himself, his actors, and his crew at work in Central Park, interacting with one another and with whomever happens to be there, and also includes the crew’s own critique of his methods and even his character. “Original Cast Album: Company” (1970, D. A. Pennebaker) Jaemin Paik When We All Live To 150 2012, Jun 1 year Research Project, Mixed media How would family life change if we all lived to one-hundred and fifty or beyond? With up to six generations living together, and the possibility of huge age gaps between siblings, the traditional model of the family would change dramatically, perhaps even becoming unsustainable with the burden of its large membership.

Lessons Learned This ELT lesson plan is designed around a short video titled Lesson Learned by StoryCorps. In the lesson students watch two short videos, speculate, speak and read about life lessons. I’m offering my most popular course, Film and Video in Language Teaching, in Barcelona in July and September this year. On the course you’ll learn how to use film and video critically and creatively in the language classroom. Find out more about the course and how to enrol here. Errol Morris: Two Essential Truths About Photography In this video created by the Guardian, writer and award-winning documentary filmmaker Errol Morris talks about the nature of truth, art, and propaganda in photography. He draws examples from the photographs of Abu Ghraib and the Crimean War, both cited in his book Believing is Seeing, and he asks the viewer to consider a most fundamental question: how does a photograph relate to the physical world? Unlike a verbal or written statement, a photograph cannot be true or false.

Olaf Stapledon William Olaf Stapledon (10 May 1886 – 6 September 1950) – known as Olaf Stapledon – was a British philosopher and author of influential works of science fiction.[1][2] In 2014, he was inducted into the Science Fiction and Fantasy Hall of Fame. Life[edit] During the First World War he served as a conscientious objector.[2] Stapledon became an ambulance driver with the Friends' Ambulance Unit in France and Belgium from July 1915 to January 1919; he was awarded the Croix de Guerre for bravery.[5] On 16 July 1919 he married Agnes Zena Miller (1894–1984), an Australian cousin.[2] They had first met in 1903, and later maintained a correspondence throughout the war. They had a daughter, Mary Sydney Stapledon (1920–2008), and a son, John David Stapledon (1923–2014).

50 Of The Best Screenplays To Read And Download In Every Genre 50 of the Best Famous Movie Scripts to Read and Download In Every Genre If you’re looking for free movie scripts you’re in the right place. We’ve been strong advocates for the benefits of reading screenplays for a long time as it’s one of the simplest ways to learn how to write. Culture - How to create an iconic image What do you think of when you hear the word ‘icon’? Liz Hurley in that Versace dress? David Bowie? Ant Farm (group) Ant Farm was an avant-garde architecture, graphic arts, and environmental design practice, founded in San Francisco in 1968 by Chip Lord and Doug Michels (1943-2003). Ant Farm's work often made use of popular icons in the United States, as a strategy to redefine the way those were conceived within the country's imaginary. We wanted to be an architecture group that was more like a rock band. We were telling Sharon [a friend] that we would be doing underground architecture, like underground newspapers and underground movies, and she said, ‘Oh, you mean like an Ant Farm?’

Free MIT Course Teaches You to Watch Movies Like a Critic: Watch Lectures from The Film Experience We all have our favorite film critics. Maybe we gravitated to them because they write well or because they share our tastes, but the very best of them — the critics we read even on genres and directors we otherwise wouldn't care about — make us see movies in a new way. Specifically, they make us see them the way they do, and the point of view of a professional critic steeped in cinema history and theory (not to mention the thousands and thousands of hours of actual film they've watched) will always have a richness that the casual moviegoer can't hope to enjoy on his/her own. Unless, of course, you take The Film Experience, a 23-lecture course from the Massachusetts Institute of Technology.

Photography Mapped - Interactive Camera Diagram Example Was: Street at night Street at night F/Number Was: f/5.6 Archigram Peter Cook presents Archigram's project of “Plug-in City” Archigram agitated to prevent modernism from becoming a sterile and safe orthodoxy by its adherents. Unlike ephemeralisation from Buckminster Fuller which assumes more must be done with less material (because material is finite), Archigram relies on a future of interminable resources. The works of Archigram had a neofuturistic slant being influenced by Antonio Sant'Elia's works. Buckminster Fuller and Yona Friedman were also important sources of inspiration.

Every Frame a Painting is dedicated to the analysis of film form. Pictures and sound all the way, baby. by lacasto Aug 10