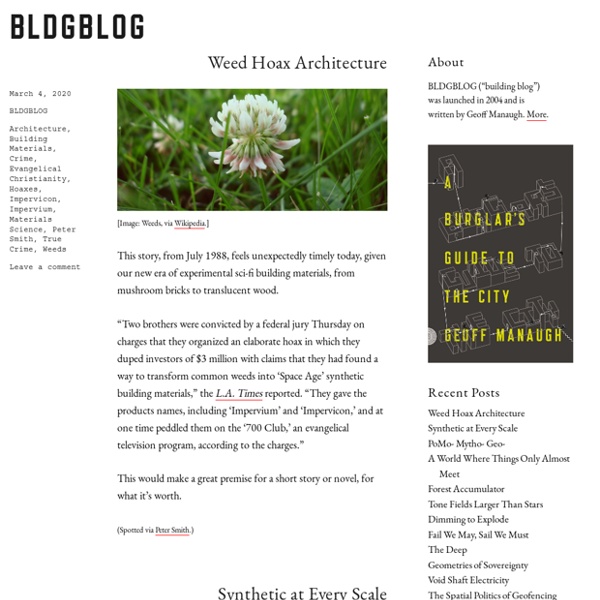 Olaf Stapledon William Olaf Stapledon (10 May 1886 – 6 September 1950) – known as Olaf Stapledon – was a British philosopher and author of influential works of science fiction.[1][2] In 2014, he was inducted into the Science Fiction and Fantasy Hall of Fame. Life[edit] During the First World War he served as a conscientious objector.[2] Stapledon became an ambulance driver with the Friends' Ambulance Unit in France and Belgium from July 1915 to January 1919; he was awarded the Croix de Guerre for bravery.[5] On 16 July 1919 he married Agnes Zena Miller (1894–1984), an Australian cousin.[2] They had first met in 1903, and later maintained a correspondence throughout the war. They had a daughter, Mary Sydney Stapledon (1920–2008), and a son, John David Stapledon (1923–2014).

grasshopper « un didi Follow Get every new post delivered to your Inbox. Join 50 other followers Powered by WordPress.com No. 582 - 2013.0821 Brooklyn is a hub of innovative architecture and design, with dozens of young professionals commissioning or undertaking their own eco-sensitive renovations to existing brownstones and low-rise attached buildings throughout the borough. Tighthouse, a Passive House brownstone retrofit, sits at the end of a string of two-story buildings constructed in 1899 that share a tree-lined block with larger brownstones built around the same time, centrally located off Fifth Avenue in the neighborhood of Park Slope. It is the first certified Passive House in New York City and meets the standards for new construction, surpassing the EnerPHit certification.

cityofsound The primary interface between the UK’s planning system and the people and places it serves is a piece of A4 paper tied to a lamppost in the rain. OK, not always rain. But rain often enough. The paper is a public notice describing a planning application for some kind of ‘development’ somewhere in the vicinity. If it’s a significant development, and very close to your property, you may also get a notification in the post. Emergent Urbanism, or ‘bottom-up planning’ I was asked to write an article around ‘bottom-up planning’ by Architectural Review Australia a while ago. It was published in the last issue, and I’m re-posting here. ‘Bottom-up’ is hardly the most elegant phrase, but I suspect you know what I mean. Either way, I re-cast it in the article as ‘emergent urbanism’ which captured a little more of the non-planning approaches I was interested in (note also the blog of same name, which I didn’t know about beforehand). It partly concerns increased transparency over the urban planning process but also, and perhaps more interestingly, how citizens might be able to proactively engage in the creation of their cities. While it applies to Australian cities most closely, I hope the ideas here might be more generally interesting.

Institute of Critical Zoologists "The work to follow is an exploration of these complexities and reminds us that birds occupy a large and central part of that universe that human beings constantly carve out of nature." Ding Li “In contemporary society birds are, perhaps, both the most watched and most eaten animal on our planet. They have become a focal point of debates about a 'proper' relationship between humankind and nature, and about definitions of humanity itself.” Naoko Noguchi Against the very real environmental drama unfolding across the globe, multidisciplinary artist Renhui Zhao presents the exhibition A Bird in the Hand. Tutorial 3 - Reciprocal Systems - AAET picture: arup agu This tutorial will show how a reciprocal system can be constructed using Rhino, Grasshopper as design environment to inform a physical model. Download Tutorial as pdf - workshopsafd8-digitalmaterialandfabrication-tut3-reciprocal Download Rhino and Grasshopper file example of the GH definition colouring sticks by length This post is created by: Martin Tamke

Jaemin Paik When We All Live To 150 2012, Jun 1 year Research Project, Mixed media How would family life change if we all lived to one-hundred and fifty or beyond? With up to six generations living together, and the possibility of huge age gaps between siblings, the traditional model of the family would change dramatically, perhaps even becoming unsustainable with the burden of its large membership. Data Tree Utilities: Match Path and Partial Flatten In the coming weeks, I am planning to release some clusters I've put together for use, and I thought I'd start with two that correspond to common operations I perform on data trees. The first, Match Path, takes a flat list of data with N items, and another list of data with N items with some kind of arbitrary tree structure. The output is the first flat list, reconfigured to match the path structure of the input list.

scarcity of hunger - wei Scarcity of hunger Feed me next meal Scarcity project with Het Nieuwe Instituut, Rotterdam, 2013-2014 - In this fast-paced society, we take it for granted that hungry feeling can be solved immediately. With all the prepared food and fast food around us, we can get food easily from 24/7 stores in next corner and feed ourselves within 10 minutes. This project originated from the high density of convenience stores in Taiwan.

Parametric Joint Quick post about a metal joint design that is modeled parametrically. In a workshop course about structural design led by Renato Garcia, we are asked to research on joints. My group have decided to look at how custom joints are designed. This is particular interesting as we see more and more of them in new designs because of the desire to realize free form surfaces, it is common to see the construction of a structural framework composed of a mesh constructed with linear steel members, the joint conditions is particularly complex because it usually receives multiple linear elements from varying angles and pitches connecting to one point. We have took reference from two buildings, Zaha’s Guangzhou Opera House and Yas Hotel in Abu Dhabi.