Page 7 of The Point of No Return: Climate Change Nightmares Are Already Here. Historians may look to 2015 as the year when shit really started hitting the fan. Some snapshots: In just the past few months, record-setting heat waves in Pakistan and India each killed more than 1,000 people. In Washington state's Olympic National Park, the rainforest caught fire for the first time in living memory. London reached 98 degrees Fahrenheit during the hottest July day ever recorded in the U.K.; The Guardian briefly had to pause its live blog of the heat wave because its computer servers overheated. In California, suffering from its worst drought in a millennium, a 50-acre brush fire swelled seventyfold in a matter of hours, jumping across the I-15 freeway during rush-hour traffic.

Then, a few days later, the region was pounded by intense, virtually unheard-of summer rains. Someone Give This Man A Nobel Prize Already. He’s Going To Save The Planet! See The Scientific Accident That May Change The World (Or At Least Your Battery Life) Nitrogen cycle: Difference Engine: End of the electric car? Aquafina labels to spell out source - tap water. NEW YORK (Reuters) -- PepsiCo Inc. will spell out that its Aquafina bottled water is made with tap water, a concession to the growing environmental and political opposition to the bottled water industry.

According to Corporate Accountability International, a U.S. watchdog group, the world's No. 2 beverage company will include the words "Public Water Source" on Aquafina labels. Pepsi's Aquafina bottled water and Coca-Cola's Dasani are made from purified tap water. "If this helps clarify the fact that the water originates from public sources, then it's a reasonable thing to do," said Michelle Naughton, a Pepsi-Cola North America spokeswoman.

Pepsi Chief Executive Indra Nooyi told Reuters earlier this week the company was considering such a move. Coca-Cola Co. told Reuters it will start posting online information about the quality control testing it performs on Dasani by the end of summer or early fall. Ask Umbra: Is it bad to leave chargers plugged in? Q. 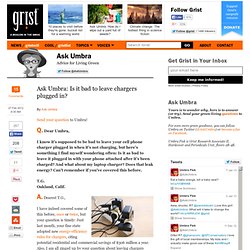 Dear Umbra, I know it’s supposed to be bad to leave your cell phone charger plugged in when it’s not charging, but here’s something I find myself wondering often: Is it as bad to leave it plugged in with your phone attached after it’s been charged? And what about my laptop charger? Does that leak energy? Can’t remember if you’ve covered this before. T.G.Oakland, Calif. A. I have indeed covered some of this before, once or twice, but your question is timely: Just last month, your fine state adopted new energy-efficiency rules for chargers, citing potential residential and commercial savings of $306 million a year. Where Is Your Old Cell Phone? Stop Global E-Waste Dumping. Were you one of the millions of Americans to get an upgrade to one of your electronic devices this holiday season? 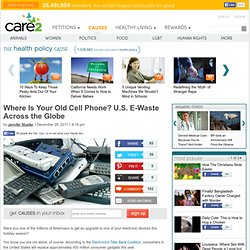 You know you are not alone, of course. According to the Electronics Take Back Coalition, consumers in the United States will replace approximately 400 million consumer gadgets this year. Take Action: Stop global toxic dumping! Make it illegal to send toxic e-waste to developing nations. Ring around the White House: Scenes from the Keystone protest [VIDEO] Cars of the Future: Future Energy. 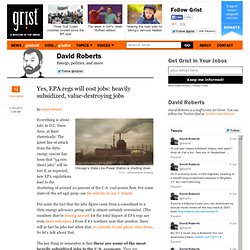 The latest line of attack from the dirty-energy caucus has been that “54,000 direct jobs” will be lost if, as expected, new EPA regulations lead to the shuttering of around 20 percent of the U.S. coal-power fleet. For some state-of-the art agit-prop, see the website of one J. Inhofe. Put aside the fact that the jobs figure came from a consultant to a dirty-energy advocacy group and is almost certainly overstated.

(The numbers they’re tossing around for the total impact of EPA regs are even more ridiculous.) State Legislation – Electronics TakeBack Coalition. Find e-Stewards Recyclers. Yes, EPA regs will cost jobs: heavily subsidized, value-destroying jobs. Energy efficiency: still awesome, still ignored. There was a brief, heady time in the late ’00s when it seemed like energy efficiency was finally going to get the spotlight. 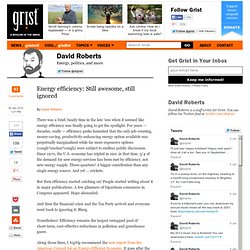 For years — decades, really — efficiency geeks lamented that the only job-creating, money-saving, productivity-enhancing energy option available was perpetually marginalized while far more expensive options (cough*nuclear*cough) were subject to endless public discussion. Since 1970, the U.S. economy has tripled in size; in that time, 3/4 of the demand for new energy services has been met by efficiency, not new energy supply. Three-quarters! A bigger contribution than any single energy source. And yet … crickets. But then efficiency started catching on!