Experienced Researcher position at Pangeanic. Job Description Pangeanic BI-Europe (www.pangeanic.com) is looking for a post-doctoral researcher (Experienced Researcher - ER) to carry out research work on the implementation and evaluation of the new hybrid computer-aided translation technology proposed in the EXPERT project and particularly, how these can be applied to its PangeaMT platform. 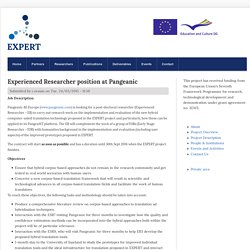 The ER will complement the work of a group of ESRs (Early Stage Researcher - ESR) with humanities background in the implementation and evaluation (including user aspects) of the improved prototypes proposed in EXPERT. The contract will start as soon as possible and has a duration until 30th Sept 2016 when the EXPERT project finishes. Objectives To reach these objectives, the following tasks and methodology should be taken into account: Expected results Requirements. Will there be CAT tools in 2020? By Manuel Herranz The speed at which computers and computing have evolved over the last 30 years has brought massive changes to many professions –and change for translation companies has not been an exception. 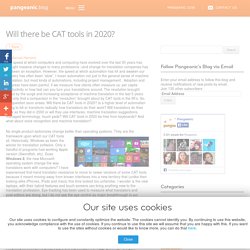 However, the speed at which automation has hit and awaken our industry has often been “slow”. I mean automation not just in the general sense of machine translation, but most kinds of automations, including project management. Adoption and progress have been painful, if we measure how clients often measure us: per capita productivity or how fast can you turn your translations around. The revolution brought about by the surge and increasing acceptance of machine translation in the last 5 years can only find a comparison in the “revolution” brought about by CAT tools in the 90’s. So, the question soon arises: Will there be CAT tools in 2020? No single product epitomizes change better than operating systems. They are the framework upon which our CAT tools sit. Microsoft Skype Machine Translator is finally here - and data sucking? Several companies are working in machine translation and, in fact, some large companies are “BUYING” machine translation companies so that the technology becomes part of their offering a it becomes core to their business. 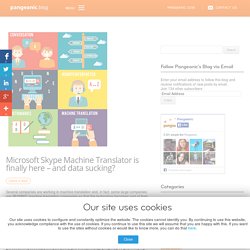 Ebay did so with Apptek in 2014 and Facebook did it a year earlier, acquiring Mobile Technologies, the Pittsburgh-based developer behind the app Jibbigo. Previously, Facebook had been relying on Microsoft Bing for machine translation. Microsoft has gone a step forward and Microsoft Skype Machine Translator is finally here. If your business interests are based in more than one country, you probably want to have a certain level of ownership about your multilingual content and how it is published. 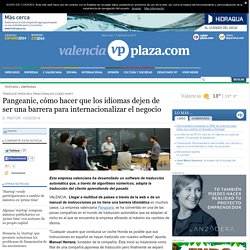 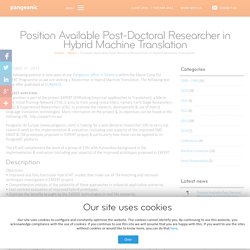 The following text is the offer published at EURAXESS. Project overview: The position is part of the project EXPERT (EXPloiting Empirical appRoaches to Translation), a Marie Curie Initial Training Network (ITN), it aims to train young researchers, namely Early Stage Researchers (ESRs) & Experienced Researchers (ERs), to promote the research, development & use of hybrid language translation technologies. More information on the project & its objectives can be found at the following URL: Pangeanic posteding to help EU Machine Translation Project Casmacat. Google keyboard app: Translations could be done in real time. With so many awesome third-party keyboard apps out there, it can be hard to distinguish yours from the crowd. 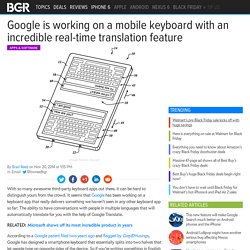 It seems that Google has been working on a keyboard app that really delivers something we haven’t seen in any other keyboard app so far: The ability to have conversations with people in multiple languages that will automatically translate for you with the help of Google Translate. RELATED: Microsoft shows off its most incredible product in years According to a Google patent filed two years ago and flagged by GreyBMusings, Google has designed a smartphone keyboard that essentially splits into two halves that let people type on opposite sides of the device. So if you’re writing something in English and you hit “send,” it will pop up on the other person’s side of the screen in whatever language you’re translating it into.

Then when they respond on their keyboard, their reply will show up in English on your side of the keyboard. Position Available Post-Doctoral Researcher in Hybrid Machine Translation. October 31, 2014 The following position is now open at our Pangeanic office in Valencia within the Marie Curie EU EXPERT Programme as we are seeking a Researcher in Hybrid Machine Translation. 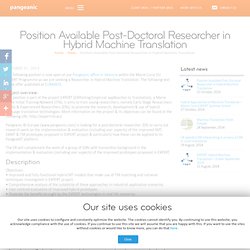 The following text is the offer published at EURAXESS. Project overview: The position is part of the project EXPERT (EXPloiting Empirical appRoaches to Translation), a Marie Curie Initial Training Network (ITN), it aims to train young researchers, namely Early Stage Researchers (ESRs) & Experienced Researchers (ERs), to promote the research, development & use of hybrid language translation technologies. More information on the project & its objectives can be found at the following URL: Microsoft and Skype Translator- Will it Become True? 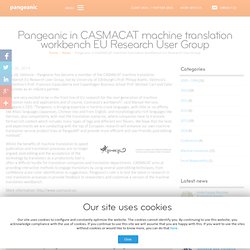 Philipp Koehn, Valencia’s Polytechnic’s Prof. Francisco Casacuberta and Copenhagen Business School Prof. Michael Carl and Celer Soluciones as an industry partner. “We are very excited to be in the front line of EU research for the next generation of machine translation tools and applications and of course, Casmacat’s workbench”, said Manuel Herranz, Pangeanic’s CEO. Whilst the benefits of machine translation to speed publication and translation processes are no longer argued, post-editing and the acceptance of the technology by translators as a productivity tool is often a difficult hurdle for translation companies and translation departments. 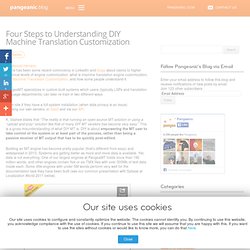 PangeaMT specializes in custom-built systems which users (typically LSPs and translation language departments) can later re-train in two different ways 1. on-site if they have a full system installation (when data privacy is an issue) 2. using our own servers, in SaaS and via our API. K. Vashee states that “The reality is that running an open source MT solution or using a “upload and pray” solution like that of many DIY MT vendors has become very easy.” This is a gross misunderstanding of what DIY MT is. Hindi to Punjabi machine translation software - PangeaMT. Why did Ebay acquire machine translation company Apptek? - PangeaMT.

Translation Technology Terminology Conference. Machine Translation has been seen as a threat, as an innovation, as an opportunistic tool by unscrupulous translation agencies…. 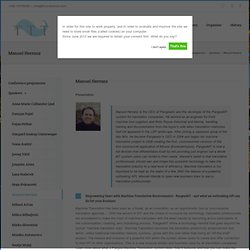 With the advent of DIY and the choice to in-source the technology, translation professionals are empowered to make the most of machine translation with the least hassle by becoming active participants of the customisation, cleaning, and (re)training process. PangeaMT offers a technology transfer that goes beyond the typical “machine translation sale”. Machine Translation becomes the translation productivity enhancement tool which, unlike traditional translation memory systems, grows with the user rather than being an “off-the-shelf” product.

The release and inclusion of a powerful API within the system allows users to create and offer connection to their MT to other organizations. Blogs. Earlier this evening Microsoft CEO Satya Nadella in Rancho Palos Verdes, Calif., in talk during the Code Conference, unveiled an early look at the Skype Translator app. This app represents a breakthrough in language translation jointly developed by Microsoft researchers and Skype engineers, bridging geographic and language barriers through the use of real-time speech-to-speech translation. The functionality combines Skype voice and instant messaging, Microsoft Translator and machine-learning based technologies for speech recognition that are used in Windows and Windows Phone Translation applications today.

During Nadella’s conversation with Kara Swisher and Walt Mossberg of the Re/code tech website relating to a new era of personal computing, he asked Gurdeep Pall, Microsoft Corporate Vice President for Lync and Skype, to join him on stage. Watch the Demo The Skype Translator app will available first on Windows 8 later this year as a limited beta. Language Technology at the service of Biotechnology: PangeaMT-BIO. Pangeanic, Spanish language service provider to release PangeaMT-BIO, the customizable Machine Translation solution for the Biotechnology domain.