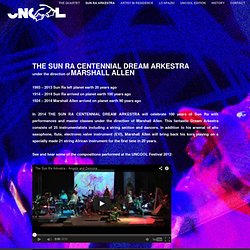 This fantastic Dream Arkestra consists of 25 instrumentalists including a string section and dancers. In addition to his arsenal of alto saxophone, flute, electronic valve instrument (EVI), Marshall Allen will bring back his kora playing on a specially made 21 string African instrument for the first time in 20 years. See and hear some of the compositions performed at the UNCOOL Festival 2012: André Vida and Max Dax talk to Marshall Allen of The Sun Ra Arkestra. Marshall Allen photographed in the Sun Ra Arkestra commune in Philadelphia. 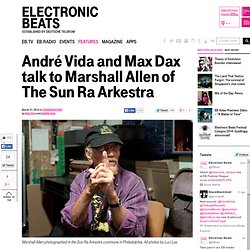 All photos by Luci Lux. Meeting the Sun Ra Arkestra’s director Marshall Allen at the group commune in Philadelphia wasn’t quite space travel, but it was a kind of time travel. The eighty-nine year-old alto sax and woodwinds maestro was eager to discuss the teachings and creative punishments of former bandleader Sun Ra, one the most singular figures in modern jazz. Indeed, Ra was amongst the first to experiment extensively with elements of electronic music, anticipating what would become the musical language of the 21st century. Mr. Yeah, this house has seen and heard a lot in the past decades. You went clubbing? No, just some overdubs in the studio.

Are you recording new music for the Sun Ra Arkestra? No, last night I was with a friend of mine, a poet, who needed some background music for his poems. So, that’s what you do at night in Philadelphia? Governor Deval Patrick celebrates Sun Ra anniversary - Names. THE SUN RA ARKESTRA (SUNRAARKESTRA) The Sun Ra Arkestra - Serenade for the Cosmos. Sun Ra Turns 100. Sun Ra: A True Birthday by Seth Colter Walls.

Outside Jazz at Lincoln Center’s Allen Room on Saturday, I overheard a question before the Sun Ra Arkestra’s debut appearance in the hall. 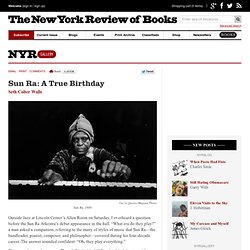 “What era do they play?” A man asked a companion, referring to the many of styles of music that Sun Ra—the bandleader, pianist, composer, and philosopher—covered during his four-decade career. The answer sounded confident: “Oh, they play everything.” That turned out to be correct. Though Ra died in 1993, today his Arkestra—“the way black people say ‘orchestra,’” the composer once explained—is led by his longtime lieutenant, the saxophonist Marshall Allen, under whom it still conjures great mystery and power. 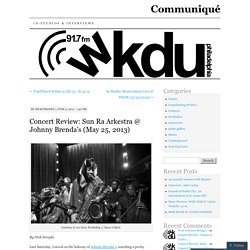 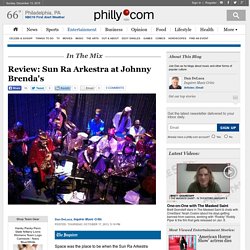 He's the one in the psychedelic Shriner's wizard outfit in red on the left. For this gig, the Philadelphia band founded by Ra, who died (or 'ascended' in Ra speak) in 1993, and directed by Allen since 1995, contained over 20 musicians. You can see only 15 or so on stage, but that's only because that's all the tiny bandstand at JB's could hold. With Allen attacking his instruments (in addition to sax, he also made a wonderful high pitched improvisational racket with his Electronic Valve Instrument) with the fervor of an avant gardist half his age, the band played for well over two hours, with never a dull moment in sight or sound. Arkestra tour dates are here. Sonic Scenery: Music for Collections - Various Artists. 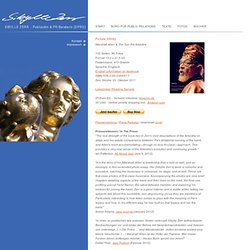 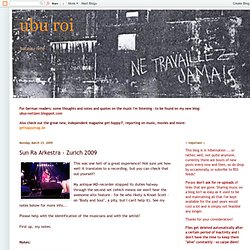 Not sure yet how well it translates to a recording, but you can check that out yourself! My antique MD-recorder stopped its duties halway through the second set (which means we won't hear the awesome alto feature - for he who likely is Knoel Scott - on "Body and Soul", a pity, but I can't help it). See my notes below for more info... Please help with the identification of the musicians and with the setlist! First up, my notes: Notes: I recorded from the first row, left of the center (in front of Marshall Allen, to his left was the piano, to the right the other reeds (l.t.r.: ts/as/bari). Bassist Juni Booth got lost in space, bass duties were assumed by the pianist.

I took two photos, not good ones, but they as well as my photos (no scanner at home) of the flyer are included. The musicians left the stage playing at the end of the first set (with Yah Yah staying behind and leaving last), and entered playing at the beginning of the first set. Sun Ra Arkestra. Music for the 21st Century - Sun Ra Arkestra. 20031013. Birdland, North Madison, October 13 2003 Setlist: 1. unidentified improvisation 2. 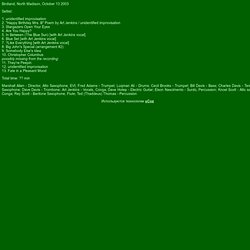 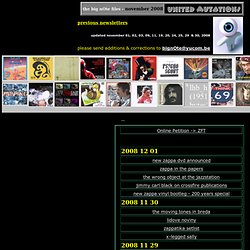