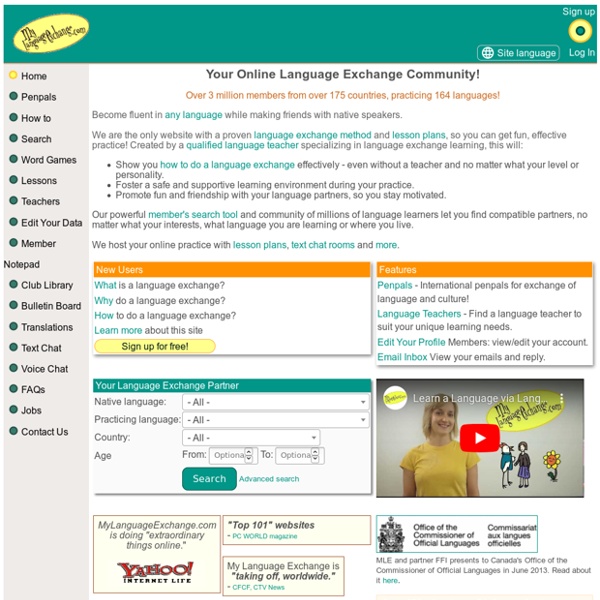 25 BEST WEBSITES FOR LEARNING ENGLISH I want the new e-book! How do you learn English in your free time? Do you meet internationals in cafés, do you self-study using books, do you get on the internet? When it comes to learning many people have realized they are not going to acquire the language just by sitting in classrooms. But not everyone has the opportunity to walk out to the street and start practising with the passers-by. Most of us, who are learning English, don’t live in an English-speaking country. Rocket French Premium I joined Rocket French a few years ago. After a respite, decided to try it again. What was already in my estimate, a fine program, has become even better!. French language learning games All French language learning exercises are completely free to use, do not require registration, and are suitable for both school kids and adult language learners. French language acquisition games that French learners can study with, that teachers can incorporate into lesson plans, or that can be used used in homeschooling environments. An introduction to listening, reading, comprehension and communication in the French language.

Visual Dictionary, Visual Thesaurus Visuwords™ online graphical dictionary — Look up words to find their meanings and associations with other words and concepts. Produce diagrams reminiscent of a neural net. Learn how words associate. Learn 48 Languages Online for Free How to learn languages for free? This collection features lessons in 48 languages, including Spanish, French, English, Mandarin, Italian, Russian and more. Download audio lessons to your computer or mp3 player and you’re good to go. Amharic Foreign Service Institute Basic Amharic – Audio – TextbookLessons with dialogues, drills, exercises, and narratives will teach you the basics of this language spoken in Ethiopia. Includes samples of speech, explanations of basic language structures, and a variety of practical exercises.

Joyous Lessons: Learning Languages the Charlotte Mason Way - Volume 1 and Francois Gouin (Part 1) "There is hardly another civilised nation so dull in acquiring foreign tongues as we English of the present time; but, probably, the fault lies rather in the way we set about the study than in any natural incapacity for languages." (Mason, Home Education, p. 301) "Let us state it as impressively as we can: the incapacity of the child is the incapacity of the teacher and the defectiveness of the method. To learn to speak no matter what language is a thing as natural and easy to a child as learning to fly is to a bird.

happy English is a West Germanic language that was first spoken in early medieval England and is now a global lingua franca. Named after the Angles, one of the Germanic tribes that migrated to the area of Britain that would later take their name, England, both names ultimately deriving from the Anglia peninsula in the Baltic Sea. It is closely related to the Frisian languages, but its vocabulary has been significantly influenced by other Germanic languages, particularly Norse (a North Germanic language), as well as by Latin and French.[6] One Humongous List of Free Online Education Games for Foreign Languages Welcome to Day 6 of the 10 day series–One Humongous List of Free Online Education Games. If you want to see the full list of subjects available in this series, I highly encourage you to check out the complete Humongous List of Free Online Education Games for links to online education games for nearly every subject. Today’s subject–Foreign Languages.

Joyous Lessons: Learning Languages the Charlotte Mason Way - Parents' Review, Programmes, and Miss Mason Herself (Part 2) In Part 1, I went through Francois Gouin's suggestions regarding foreign language study. As we know from the programmes, Miss Mason did use his series in her schools, and she approved of many of his methods--particularly in the ways they took a sharp detour from the contemporary approach. Just to touch on a few points from my last post, I think we can take from Gouin some basic principles of language study for young children; for example,

English listening exercises and tests with selected talks English Levels (Based on the CEFR) A2: Basic - Elementary B1: Intermediate B2: Upper Intermediate C1: Advanced A1-Beginner and C2-Proficiency levels not available. Difficulty: 2.59 English Listening Lesson Libary Online ELLLO has SoMe Lessons! ELLLO is on social media. Follow us on the following social media platforms to get bonus content not found on elllo and updates to the lastest lessons. Facebook Benny Lewis reveals how to learn a language in three months Benny Lewis can speak seven languages fluently, and many more conversationallyBelieves the key thing is to be prepared to make mistakes when learningImportant to keep learning fun, so change computer games into different languages and watch foreign films and cartoons By John Hutchinson for MailOnline and Benny Lewis For Mailonline Published: 09:36 GMT, 3 June 2015 | Updated: 15:00 GMT, 3 June 2015 Britons and Americans do not have the world's best reputation for learning foreign languages.

SCILT > Adult Learners > Language learning opportunities The Centre for Open Studies at the University of Glasgow offers courses in 15 languages at levels ranging from beginner to advanced. Languages on offer are: Arabic, Chinese ( Mandarin ), Danish, Dutch, French, Gaelic, German, Japanese, Italian, Norwegian, Portuguese, Russian, Spanish, Swedish and Turkish. The classes are designed to enable participants to speak the language they are learning. As part of normal classroom teaching, students will practise speaking the language in pairs or small groups and will also be given the option of doing written homework between classes.