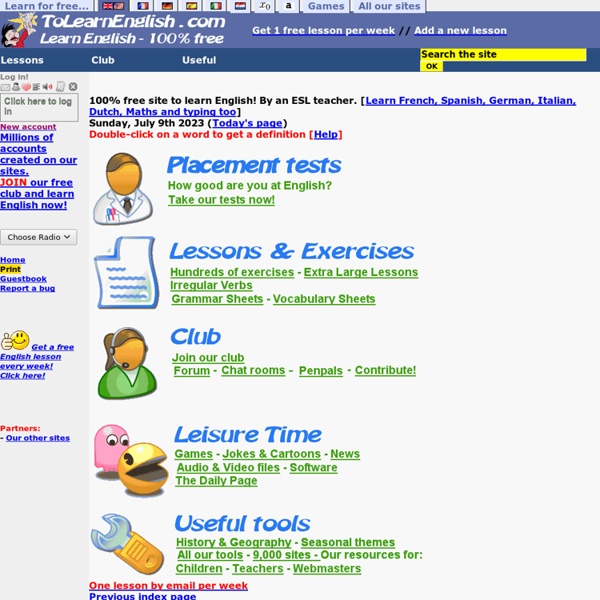 197 Educational YouTube Channels You Should Know About 197 Educational YouTube Channels You Should Know About If you don’t have a YouTube channel as an education provider, there’s a good chance you’re behind the times. Nearly every major educational institution in the world now hosts its own collection of videos featuring news, lectures, tutorials, and open courseware. Just as many individuals have their own channel, curating their expertise in a series of broadcasted lessons. These channels allow instructors to share information and blend media in unprecedented and exciting new ways. From teaching Mandarin Chinese to busting myths about Astronomy, the educational possibilities are virtually endless pun intended!

English Grammar: a complete guide Do you have a question about the correct usage of the semicolon or how to place adverbs in a sentence? If so, you've come to the right place. Edufind.com is a complete English grammar guide filled with the rules of English usage. Each grammatical rule is explained in plain English with several examples, and when needed, counter-examples. The grammatical rules covered by this guide are categorized below. English grammar is not always easy to understand, but by using this guide you should be able to remind yourself of the rules of English usage and speak or write English with confidence.

25 BEST WEBSITES FOR LEARNING ENGLISH I want the new e-book! How do you learn English in your free time? Do you meet internationals in cafés, do you self-study using books, do you get on the internet? When it comes to learning many people have realized they are not going to acquire the language just by sitting in classrooms. But not everyone has the opportunity to walk out to the street and start practising with the passers-by. How to teach possessive adjectives and nouns! As you progress with your beginner ESL students, we recommend introducing possessive adjectives and nouns at a relatively early stage. It is a natural progression once your student is comfortable with building basic sentences and has confidence with subject pronouns and object pronouns. Consider introducing the concept after your student becomes comfortable with basic Present Simple sentences. Today I would like to highlight our possessive adjectives and possessive nouns lesson plans. Using our N3.1 – Possessive Adjectives lesson plan: We begin with a quick introduction about where possessive adjectives appear in basic sentences and relate these sentences to clear and simple images:

English Express Adriana's story Here is an amazing story about Adriana. In 1986, she was left beside a road when she was a baby. Now she is grown up and lives in Edmonton. It was April 14, 1986, near Victoria, B.C. Three teenagers were walking home from school. English lessons online: EnglishLearner.com Beginner grammar exercises and tests: Present Simple or Present Continuous? - put the verbs in the correct tense Have got or has got? Visual Dictionary, Visual Thesaurus Visuwords™ online graphical dictionary — Look up words to find their meanings and associations with other words and concepts. Produce diagrams reminiscent of a neural net. Learn how words associate. Enter words into the search box to look them up or double-click a node to expand the tree. Click and drag the background to pan around and use the mouse wheel to zoom. Hover over nodes to see the definition and click and drag individual nodes to move them around to help clarify connections.

Shared Writing Learning Strategy In a Shared Writing activity, the students are actively engaged while you model the writing process. Using the board, chart paper, or a document viewer, write out the text in front of the students, with their input regarding events of the story or mechanics of writing. Using the Think Aloud strategy, demonstrate in-the-moment editing as you write. Reread the text to students from time to time to discuss if it is clear or if anything needs to be done. When the story is complete, read it to the class.

Time4English A German woman in Darmstadt found a wallet containing €1000. She refused to give it back to the owner unless she was given a €120 reward. She got the reward, but the pensioner who owned it tipped off the police and the woman was arrested. Police said: "It was a bit stupid. She could have just kept the wallet." Compréhension écrite autour d'une lettre à Judy Garland (25 mars) - Vidéo Langues vivantes Linda et Mélanie vous donnent des outils et des conseils pour aborder un texte en anglais lors de d'une épreuve de compréhension écrite. L'objectif du cours d'anglais Reading comprehension around a letter to Judy Garland How to develop reading strategies? During this first issue of "What’s on today?"

Learn English free with USA Learns! Learn English, anytime day or night. A site for adults to improve English speaking, pronunciation, listening, reading, spelling, writing and grammar. Start Now <a href="signup.cfm" id="bttnStartNow"><span>Start Now</span></a> The perfect way to learn English online! Fun stuff from all around the web Fun stuff from all around the web: videos, adds, activities, games and just anything crazy or bizarre to put a smile on your face. All in English, of course! What would you do with an extra day? For us, obviously, we’d do more improv, but what about YOU?