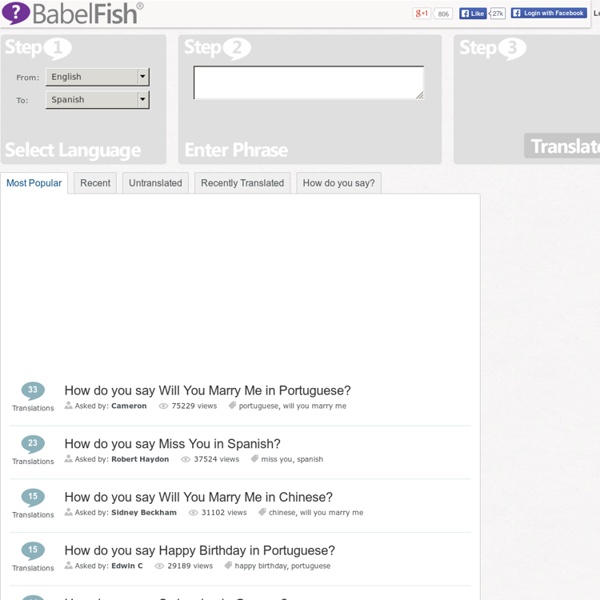 happy English is a West Germanic language that was first spoken in early medieval England and is now a global lingua franca. Named after the Angles, one of the Germanic tribes that migrated to the area of Britain that would later take their name, England, both names ultimately deriving from the Anglia peninsula in the Baltic Sea. It is closely related to the Frisian languages, but its vocabulary has been significantly influenced by other Germanic languages, particularly Norse (a North Germanic language), as well as by Latin and French.[6] Cliche Finder Have you been searching for just the right cliché to use? Are you searching for a cliché using the word "cat" or "day" but haven't been able to come up with one? Just enter any words in the form below, and this search engine will return any clichés which use that phrase... Over 3,300 clichés indexed! What exactly is a cliche?See my definition Do you know of any clichés not listed here?

25 BEST WEBSITES FOR LEARNING ENGLISH I want the new e-book! How do you learn English in your free time? Do you meet internationals in cafés, do you self-study using books, do you get on the internet? When it comes to learning many people have realized they are not going to acquire the language just by sitting in classrooms. But not everyone has the opportunity to walk out to the street and start practising with the passers-by. Most of us, who are learning English, don’t live in an English-speaking country. Expressions for Agreeing and Disagreeing This page is about words and phrases that we use when we agree or disagree with someone in English. Stating an opinion In my opinion...The way I see it...If you want my honest opinion....According to Lisa...As far as I'm concerned...If you ask me... Asking for an opinon

13 killer Chrome apps to replace your desktop software When Tim Berners-Lee invented the first Web browser in 1990, it was just an application made to read HTML pages passively. Fast-forward to today, and the modern Web browser has become a powerful platform in itself—almost a miniature operating system, capable of running complex JavaScript code and interacting with Flash plug-ins. Indeed, Web pages have evolved into Web apps, to the point where we can do much of our productivity work in a browser window without ever having to invest in traditional desktop software. But how much work can you really do from a browser? Could you replace all of your desktop apps with Chrome extensions, and be none the worse for wear? After testing a bunch of Chrome apps, I found mixed results: Web apps simply aren’t designed to be complete replicas of their desktop counterparts.

Visual Dictionary, Visual Thesaurus Visuwords™ online graphical dictionary — Look up words to find their meanings and associations with other words and concepts. Produce diagrams reminiscent of a neural net. Learn how words associate. 25 Terrific Online Games for English Language Learners - Online College Courses English language learners fall into two categories — native speakers and those pursuing it via ESL/EFL instruction (or self-instruction!). But both demographics can build up their skills, no matter their age or proficiency, through game-based learning. The Internet, in its infinite providence, does not disappoint when it comes to hosting effective resources for teaching and reviewing the core components of the English language. Here’s a few particularly useful games or, more accurately in most cases, suites of games. GameZone: Dozens of simple, straightforward games about grammar, spelling, and vocabulary reach out to English language learners at all levels. Keep in mind, however, that this site is based in the U.K. and follows a different set of linguistic rules than American English.

English listening exercises and tests with selected talks English Levels (Based on the CEFR) A2: Basic - Elementary B1: Intermediate B2: Upper Intermediate C1: Advanced A1-Beginner and C2-Proficiency levels not available. Difficulty: 2.59 Behemoth, bully, thief: how the English language is taking over the planet On 16 May, a lawyer named Aaron Schlossberg was in a New York cafe when he heard several members of staff speaking Spanish. He reacted with immediate fury, threatening to call US Immigration and Customs Enforcement and telling one employee: “Your staff is speaking Spanish to customers when they should be speaking English … This is America.” A video of the incident quickly went viral, drawing widespread scorn. The Yelp page for his law firm was flooded with one-star reviews, and Schlossberg was soon confronted with a “fiesta” protest in front of his Manhattan apartment building, which included a crowd-funded taco truck and mariachi band to serenade him on the way to work.